Hi everyone. Long time no see. A lot has happened with this project since I last posted, and this project has changed a few too many times.

Hi everyone! It's been a while since I last updated this page. I kinda ended up ignoring this project for a while, as I had to work out stuff in life, as well as work on my art portfolio.

A lot of progress has been made on the game, including a brand new engine, and improved graphics. I have taken some time to brainstorm some more before doing all of this, and with the help of some friends, I'm ready to start working on this again. I've added a ton of stuff since the last update, which was over 3 months ago if I recall. I've taken a lot of time over the past 2 weeks to implement all of this. 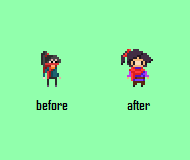 The sprite has gone through a huge change, as well as some colors being changed. Bufanda has gone through many sprite changes throughout the time of development, and I do plan on keeping this design as the final, unless there is some small tweaks to be done. Overall, I believe the new design is easier to see, and the larger sprite makes for more detail.

Shown in this gif is what I ended up getting done about a week ago. I had added collectables (gems, act like 'coins') as well as adding a test enemy, which is the red version of the player, fully damageable as well as being able to hurt the player. It took 3 attacks to destroy it, making it drop gems. The orange object was a trampoline, which....made you jump higher. Spikes were also added, and slopes were recoded, so the player no longer gets stuck in them. 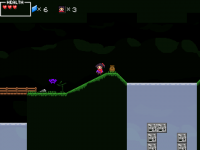 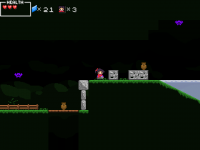 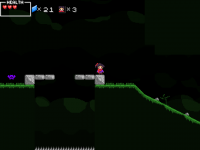 Currently, a lot more has been implemented, including new additions to the tileset, an actual enemy, water with physics, drowning, popup damage, bubble effect while in water, and parallaxing backgrounds.

I hope to continue working with this amount of passion on this project, and all of your support has helped so much. Thank you!

The Girl and the Scarf Platformer
Related Engines