As I roll out the 0.02 update and its subsequent hotfix 0.02a, I feel the game now has more meat on its bone.

The 0.02 and its hotfix contain more or less the same content, but I had to quickly fix a mistake I thought I didn't need to fix. I always playtest the game under a closed testbuild before I release the update. But I didn't realize that the coin score would not reset after level restart.
This however was easy to locate and fix, I just had to make the code run a local integer as well as a global integer (that can communicate with other levels and other codes).
Why did I make a global integer as the coin score? Let's just say I'm experimenting with some awesome R and D. *winkyface* I'll talk about it later in this post.

What was new in the 0.02 update that made it so important to name it 0.02 instead of 0.01b? Some major game changers made that decision very clear.
First off, there's now an endless mode, erh, well as endless as I could make it. The levels platforms are still randomly generated, and a lot of the same gameplay elements are the same. But now the leash has been unhooked, and I can now develop more content for each altitude theme.
I made a new theme called the Cloud Layer, and it's pretty much just that; a cloud layer. Although it has its own background, corresponding to the correct light setting, it does not yet have its own music.

One other major difference that can be noted quickly is the new player model.
Meet Guy Cap. 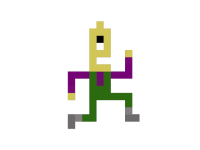 He's a... A... He's a window cleaner, I think. His backstory is not important. He's from an alien planet, whatever.
But his goal is to reach the top and get his cap back. You see, he lost his cap when cleaning some windows on one of the tall sky scrapers, and the cap was taken by wind-current.
I told you the story was not important.
Now, Guy Cap has a special ability, his shoes give him the power to jump extra high, also make him fall faster if he so desire.
So now you know the goal, get the cap... and get as many coins as possible while getting your cap.

One of the really big changes added in the game, is the ability to turn some image effect on or off.
This can be done by going into my "custom" options menu. 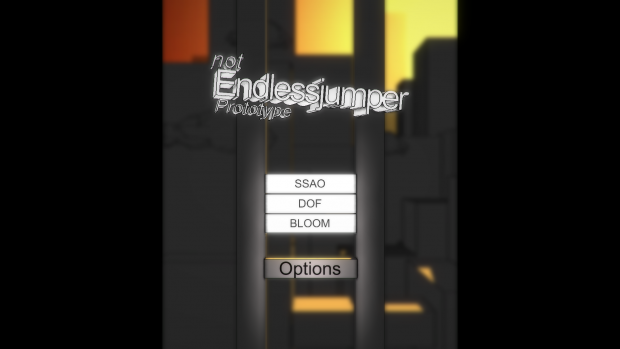 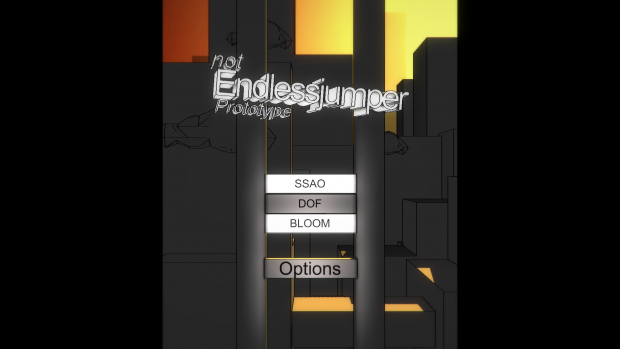 It was a hassle actually making it save the settings, and carry it over to the actual play level. You see, they are separate entities, not on the same map at all. Some of the same assets are used on both, but they operate independently of eachother. In turn making them communicate and see the same code was a bit tricky, but as you can see I did manage it. 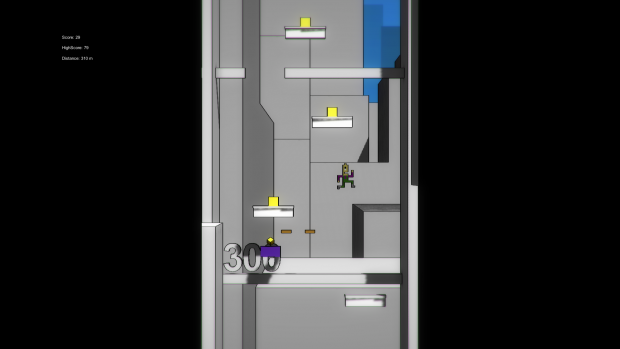 Other new stuff added in are what I call _END.
What is _END? Well, its property and location will change during later updates, but it is the end... Simple as that.
But I thought you said you added in endless mode?! I did, but it would be immensely boring to just play this game as it is now, endlessly. So I added a terrifying end, called _END.
You will know what the _END is when you see it, or hear it.
I added in a simple star texture when you get high enough as well, making it feel like you are actually making progress. But I will change its location too when the time comes.

Now onto the next bit of news.
What is planned for the next update? Will it be a "big" update like last time? Or will it be a small one?
I said earlier I experimented with having code stored globally. Now what can one do with code that other scenes can also see? How about achievements.
Yes I actually found an "easy" way of making achievements. The achievements will be another fun activity for those who want a challenge. No easy "Get the first coin, 10 gamer points" achievements here. The first one I experimented with was "No temptations"; reach 2000units/m in height without picking up a single coin. It is actually harder than it seems.
I have made a list of possible achievements that might or will be in the next update. I also plan to make more custom models, more hazards, more powerups, and the next theme.
I'm thinking of making pick-up-able powerups that you can store and use later during play. Like slowdown/bullet-time, super jump, invincibility, and possibly more.

After the next update I will however take a small break from this project, to focus on my other gameproject; The Gravity Trip. A gravity based puzzle game. I have already made the games movement controllers, and got some help with making more levels/puzzles. All I need to do is make a proper menu, and the prototype is ready to go.
That game will also be available here on indiedb.