This might be the first time a release date has ever been brought forwards instead of pushed backwards.

Typically, it took me until now to release I'm away when I'd set the release date for. Obviously I'd like to be on-hand for any teething problems that will inevitably crop up on release day. As such, Post Script will now be released on Wednesday 16th December. That is in two days' time! Woop!

Here. Have a poster. It's on the house. 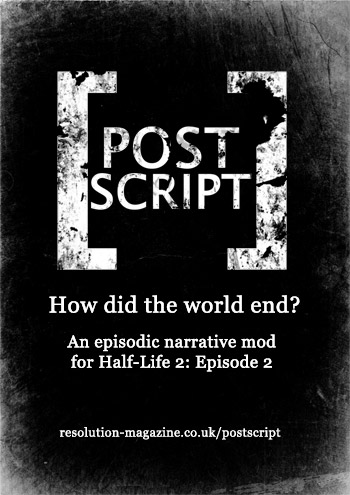 I knew this would happen. It was inevitable.

Guess I'll just have to wait.

it sure does (i love sarcasm x3)

You guys are starting on Valve time, now what the f. Don't end up like the L4D2 Demo mate, your already starting to act like it.

Uh... they're bringing the date *forwards*

GRAHHH I KNEW THEY WOULD PUSH BACK THE RELEASE DATE. RAGGGGGGGE.

Relieved when I saw that the release would come sooner than expected. Cheers, can't wait to try the mod out!