Since C&C4 Has really bad comments about design we became carefully with some Designs.

XML & GUI Scripters Needed!
Yes, We are almost running into the programming stages. So that means we need WELL talented XML & GUI Programmers! Do you have a passion for C&C Games and a strong knowledge with XML C&C3 Modding? Apply now! SEND A PM TO: ES_Chrizz

January Media Update?
Media Update 3 is coming Early 2010. We don't have any clue when, but its coming! The problem is that we need XML & GUI Programmers.

We've got Tiberium FPS & C&C4 Inspiration
Its a big shame Tiberium FPS has been canceled, and it had some good reasons. But this doesn't say we wont use the Designs & Inspiration. Tiberium FPS is BETWEEN C&C3: Kane's Wrath & C&C4:Tiberian Twilight And we really like most of the Tiberium FPS designs! Also C&C4: Tiberium Twilight became one of our inspiration source, Like the Maps, Tiberium Cracks & Environment. So don't be surprised to see C&C4 & Tiberium FPS Designs in C&C3: Tiberium Icestorm! 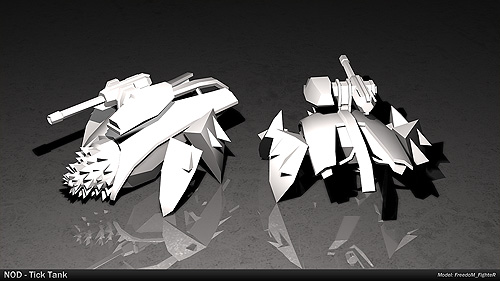 This Tick Tank design is made of 100% WIN

that's a big pointy wang ya got thar

I deffinatly like your tick-tank, it's a nice twist on a classic design although the idea of a walking MBT is somewhat rare...

Then again, so is burrowing into the ground...

TBH, im rather unsure about the Mecha-Tick.
if you can Release a Render with it textured, i can probably make my Choice.

Problem is we dont wanto texture it because the time. Texturing the right style costs time. and when its textured and people dont like it. it will be waste of time for us.

Oh, i see.
Well, i prefer the Classic (Tracked) Tick because of Nostalgia Factor.
this Mecha Tick is pretty Nice looking but does not like something Nod would bring to the Frontlines.

This is one of the most beatiful design that i have honnor to see, ever!