C&C 3: The Forgotten has just announced three new air force units for The Forgotten, with concept art and screenshots. The Forgotten are a ragtag group of rebels with Tiberium based illnesses featured in previous games but left out of C&C 3. C&C 3: The Forgotten adds their faction and immersive campaign to C&C 3, including a full series of high definition full motion videos to help tell the story.

We're back only a few weeks after we released the first theatrical trailer in modding--which garnered almost 20,000 views in that short time. Shortly after we announced that we would be the first mod ever to feature a full campaign accompanied by high definition videos, we were named one of the top 100 mods for any game by Moddb. The second round of voting has begun in the Mod of the Year contest, and we would greatly appreciate your vote.

Today, we're here to show off some more of our gameplay, revealing three new units from The Forgotten's air force. Below you can see in-game screenshots of the Logistics Blimp (by Nielsen), and check out a promotional piece of concept art of the Sidewinder, Logistics Blimp, and Transport Plane (by Kane Nash). 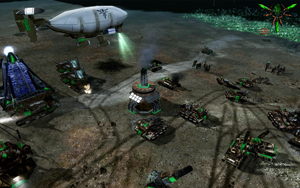 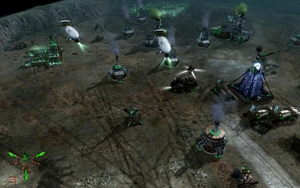 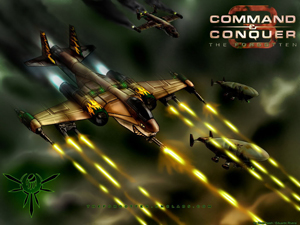 The Logistics Blimp is a tactical support unit that caters to commanders who love finesse. Gliding high above the battlefield, it offers Forgotten commanders excellent tactical views--permitting friendly units to fire farther. It also can jam nearby enemy missiles. The Sidewinder is a basic attack aircraft. It has one accurate nose cannon that excels at picking off infantry, and six wing guns which spray the battlefield with bullets. The Transport plane is used in a Forgotten special ability, permitting them to quickly airdrop units and spread out over the map. The final unit in The Forgotten's air force is the already-announced Impact Drone. You can read about all of these units on our Units page, and see pictures and videos of them on our Media page.

Remember, if you haven't already voted, the team would love your support in the Mod of the Year awards. We think The Forgotten's story deserves to be told, and we appreciate your effort in spreading the word. Like our group of rebels, true C&C stories won't be forgotten.

The Sidewinder looks awesome :D (assuming it's the one on the bottom picture)

I just cant whait for a realise.

Awesome work you're doing there, what release date do you estimate. A new story it's great but alongside a new faction is legendary, keep the work on!