What is it?
Call Of Duty's modern-day spin-off returns with its trademark intensity turned up a notch.What we like
No let-up in action thrills and epic set-pieces. Absolutely amazing visuals. Slick presentation throughout. Online multiplayer and two-player co-operative modes that add huge longevity to the game.What we don't like
Bordering on incomprehensible (and certainly daft) plot. Military clichés that pass as script. Plot elements designed to create controversy, that fail to engage on any emotional level. Slightly short.Judgment
You won't find a more intense, action-packed game this year. But a tiny few elements do misfire.Review
Call Of Duty 4: Modern Warfare significantly shifted the first-person shooter genre. Before its arrival, shooters in modern settings were mainly military simulators: dry, slow-paced games that forced you to inch through thick grass before being shot by someone miles away. Before Modern Warfare, Call Of Duty was a first-person World War II rival to the Medal Of Honor games.After Modern Warfare, every shooter suddenly had to be a high-octane anti-terrorist dash. And Medal Of Honor (and the non-modern Call Of Duty games) came across as outdated and a bit rubbish.Modern Warfare 2 doesn't revolutionise gaming in quite the same way its predecessor did. It follows instead with a serious evolution in visuals, a whole new story and a refinement of the world-class online play that has seen Modern Warfare remain as one of the most played online console games. 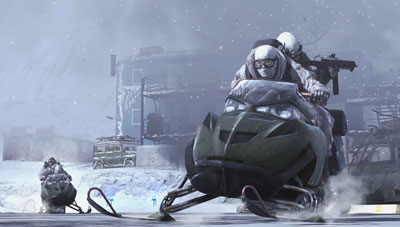 For those not acquainted with the series, the Modern Warfare games tell a story by swapping missions between US and British SAS forces taking on extremists and terrorists in modern settings. The series' trademarks are epic set pieces mixed with high-intensity combat with a much-copied aiming-down-the-sights system that is fast, intuitive and satisfyingly violent.Back in the saddle
In Modern Warfare 2, a Russian freelance maniac launches a horrific attack on innocent civilians in an airport, before framing US soldiers as the perpetrators, bringing the world to the brink of nuclear war. British SAS forces scramble to hunt down the real culprits while US Marines fight against Russian retaliatory forces.The game switches back-and-forth between the US and British troops. Each mission plays out like an attempt to over-the-top the last: from storming an oil rig, to fighting through the nuke-wasted remnants of a capital city in flames, to fleeing a collapsing Russian Gulag, to hunting down an arms dealer in a Brazilian favela slum, full of armed-to-the-teeth drug gangs that attack you from above, all sides and even flank behind you.At around seven hours of single-player, regular-difficulty play, it's an exhilarating, exhausting and very loud thrill ride through every modern warfare cliché going.Single-player, Modern Warfare 2 is the most visually stunning game this year, and one of the most slickly presented and polished throughout. It's an adrenaline rush that doesn't let go - immense fun, if you can stand the sheer intensity of it.Plot holes
There are a few catches to the single-player mode. Just don't take the level of detail here as indicative of how much they spoil the game - they don't. But the first, and most obvious, problem is the plot.Modern Warfare 2 picks up five years on from the original. But even if you played that game thoroughly, be prepared to be baffled by this incomprehensible piece of tosh masquerading as a storyline. It is essentially a bunch of strings thrown together to vaguely link the levels the designers clearly had ideas for. It makes no sense and its US elements lean too strongly on post-9/11 fears of attacks against the US and terrorist atrocities. 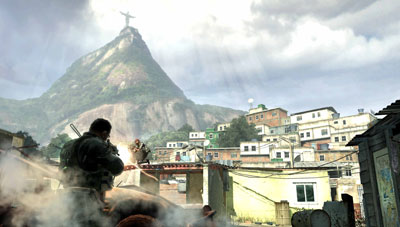 These might play out very emotively in America, but to British sensibilities can sometimes come across as ludicrously unlikely and overly bombastic.The worst example is the already-infamous airport massacre level. Here, you play an undercover marine who has infiltrated a terrorist cell. The cell proceeds to hit a Russian airport, massacring hundreds of innocent civilians. The level seems mainly included to court controversy - which it has done.But it's not very "fun" to play. Nor is it sufficiently sickening - the civilians don't move or react as fluidly or realistically as the armed forces you fight against for the rest of the game do. They end up seeming a bit pathetic and slightly jerky - as if the game's designers added them as an afterthought.Weak script
The level, and the rest of the game, also suffers terribly from weak scripting. Clear references are thrown in to the spectacularly good Generation Kill TV mini-series on the Iraq war (one part of a level is even based directly on a scene from the show).All of the military jargon used in Kill has been lifted wholesale for Modern Warfare 2, but the game's makers have transferred none of the wit, character depth or emotional grounding from the show to the game. Instead you get one-note macho "hooah" nonsense throughout. It makes Gears Of War 2 seem like Macbeth. 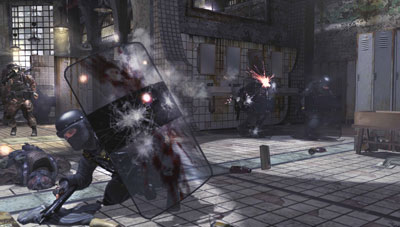 Modern Warfare 2 also comes up slightly short in length stakes. Not as short as the original, but considering it was originally meant to be retailing for over £50, a bit too short at seven hours end-to-end single-player.The game's final weak point? Its intensity. Generally a good thing - but the original Modern Warfare slowed things down and varied pace enough to give you pauses for breath. Virtually without exception, Modern Warfare 2 levels vary between "let's turn it up to 11" all-out intensity and "hey, how about 11.5?" There is simply no let-up.But to reiterate, despite those minor faults, Modern Warfare 2 is one of the most compelling single-player experiences you'll have all year. And then, of course, there's multiplayer.Multiplayer action
Slicker, broader and faster than even the original - Modern Warfare 2 will clearly still be one of the most-played online games around until Modern Warfare 3 hits. It's superb. Although, be warned, despite several attempts to make things more comprehensible and easier for "newbie" players to get into, online multiplayer remains punishingly tough to start with. Be prepared to die a lot before you start killing in return.The icing on the online cake is Special Ops - a two-player (although you can do it solo with a computer-controlled buddy) co-operative mode with a mix of new and reconfigured single-player levels. It's absolutely brilliant - with arguably a greater variety of action types than the single-player mode manages.With a high-intensity single-player campaign matched by such multiplayer goodness, about the only reasons you shouldn't already own Modern Warfare 2 are a) you have severe tinnitus already, b) the postal strike is still going on near you and you ordered online or c) you absolutely hate any games with guns in. If the above don't apply, get shooting.