I've decided to make some major design changes to Caeludum. I want to detail what those changes are, the thought process that led to them, and what they mean for the development of Caeludum.

As I began to implement more of the features I had planned for Caeludum, I started to doubt that I would be satisfied with the final product. I tried to take a step back and think about what I really wanted the game to be. Most of my design up until this point had been inspired by other god games, so I researched the complaints and criticisms of similar games to see what they did wrong.

The most common complaint I found was about UPlay in the case of From Dust. The second most common was that people never felt like a god while playing. If Caeludum was going to be a god game it needed to make the player feel like a god. So, where did those other god games go wrong? To figure that out I started thinking about what it really meant to play god. What is a god? Had I ever played a game that really made me feel like a god? The examples I came up with were SimCity, Minecraft and other similar titles, but here were no god games on the list. I always just felt like a powerful mage. Most god games give you a world to modify and influence, but there is no element of creation. Creation is what being a god is all about.

Since Caeludum began as a world generator without any real direction for gameplay it was going to be the same. The original idea was that the game would start with the world looking something like this: 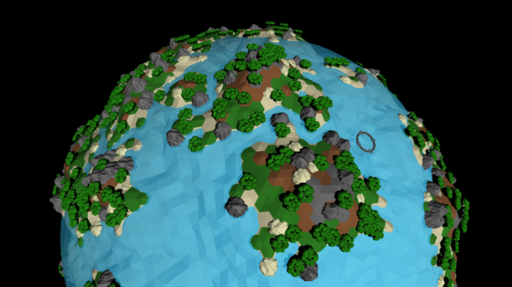 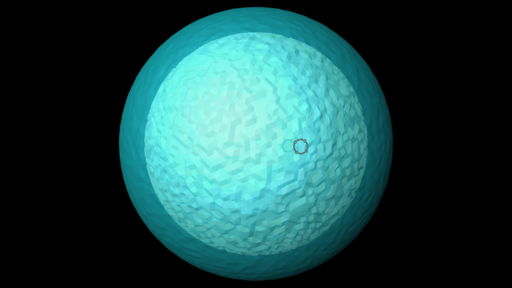 It might not look as interesting at first glance, but it is a blank slate for players to create the world that they want to create. It will start to look more like the first image as the game progresses, but instead of it being generated by the computer it will be created by the players. Originally terraforming wasn't going to be a major part of the game. It was in there but mostly as a side effect of the more powerful abilities, like summoning earthquakes and volcanoes. Now terraforming will be a huge focus, especially in the early to middle stages of a match.

I've also rethought how the game will be won. My first idea for a victory condition was the first player to reach a certain percentage of the worlds population following them. The problem with that was if I made the percentage too high it would be obvious who the winner was long before the game ended. If it was too low it would feel like a hollow victory. My plan right now is that to win your sphere of influence must reach the whole world. Since players influence can overlap each other, one player getting closer to victory doesn't necessarily mean that another player is losing progress.

So what does all this mean for development? The bad news is this means I will be starting the project over. These new ideas will change how the game functions at the core, so starting fresh will be quicker and easier than modifying what I have so far (plus I planned on that anyway because my code is a real mess right now). The good news is most of my work can be reused. My random world generation code is probably be the only part that will be thrown out entirely, because it won't be needed anymore. Hopefully this won't increase development time too much, I'm predicting less than a month before I'm back to the point I'm at now.

I hope those of you that were already following the development of Caeludum will agree these changes will make for a better game. I'd love to hear your input in the comments here or on Twitter @Quade81

Thank you! I'm a huge fan of low poly art and it works really well for what I'm doing. I'm glad you like it!

Thanks! Black and White was a big influence. It will be a much different game though.