Just over a month ago Desura was announced, find out what we have been working on since then.

In case you missed the announcement, Desura is a digital distribution app for games and mods. We are currently running a private beta, and will issue beta invites to those that email us or post a comment here. Time for our first status report, we will aim to post these on a semi-regular basis from here-on-in, so please track this group to be notified, or follow us on twitter.

While releasing Desura to the public is top priority, the past month has been hectic due to the Mod of the Year and Divinity 2 Competition we are currently running. Top this off with a trip to the GDC in March which needs to be organized (get in touch if you want to meet) and it is fair to say we have been keeping very busy.

Mark aka Lodle, is the lead application developer. Scott aka INtense! is the lead web developer. We also have a legion of testers and editors providing help during the private-beta phase.

At the moment Desura only supports simple installs of mods (i.e. mods that are contained inside a single folder). The problem with this approach, is this only works for around 5% of mods we host on ModDB. This week I (Mark) have been implementing ways in which we can support more complex mod installs. This is proving quite a challenge as every game is different and there are many painful "edge" cases to consider.

Releasing content on Desura is a little different from releasing content on ModDB. All mods / games must go through a 5 step publish process, to ensure a high-level of quality and control. This 5 step process is mostly complete, and free mods / games can be released right now. However controlling a release (i.e. setting release dates, price, branching releases, restricting betas to certain members) is not yet available. I (Scott) am currently enhancing the 5 step process to allow more granular control, this should be a two week job. 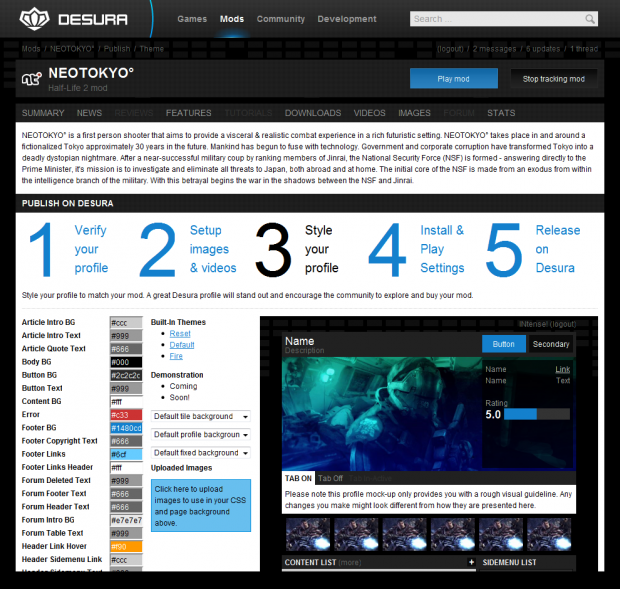 This will be a mammoth update so we expect to be working on this functionality and testing it for the next few weeks. It will be a major step forward, and a key one which needs to be done before Desura can go public. At the moment we are aiming to release late March / early April. A few more significant milestones still sit in our way, which we will tell you more about in the coming weeks.

As I said above, gamers email us for an invite. Developers, we are welcoming mod / indie teams that want to release on the platform, so please get in touch if that is you.

Great Work Guys, Can't wait to try stuff out soon on beta :D. Also hopefully my game will be done soon then can talk more about releasing on the platform as we got 3 other publishers intrested now.

Desura is nothing I'd want to buy games from, mainly because I've used steam for too long. But the potential it has with mods. Oh god! I love the fact that I could download Jailbreak source before it was even out on Moddb itself.

You guys should try and add time exclusive mod releases on Desura to attract more attention. Simmilar to what Fileplanet is doing, only that you guys know how to do it right and without shoving a fake queue down the players throat.

I want to see how this distribution platform will be any different then steam, and not fail like vapor did. Taking on steam is a big project and very daunting. If this is a strict mod delivery system that could work with steam, then you have a very solid application

easy, it has the biggest mod database on the internet backing it up :)

Desura is great service-there everything what I want. Downloading mods trough Desura its so cool! Click and install-everything genius is simple)

desura powa, what else?

Looking great!
Any chances to get in the beta?

Looks good! Would love to try this out. I wouldnt say its "competition" for steam, since most people can have both (Steam for Commercial games/DLC, Desura for Indies/Mods.) Looking forward to how this turns out

Awesome, and I hope to see you guys at GDC!

Everything looks amazing, but NeoTokyo should have a much higher rating than 5 ^_^

Looks great. It'd be nice to be a beta tester.