Another batch of new mechanics added since the prototype.

A set of new unrelated mechanics was recently added to provide more strategic options. I'll summarize them together here.

Similar to overloadable energy weapons, some hover and flight modules will now support overloading as well. As a completely optional mode toggled through the normal activate/deactivate cycle, while overloaded a propulsion system factors into the speed calculation as if a second one of the same type was attached.

At the same time this will drain more energy and produce more heat, so much so that it's unlikely a build will be able to sustain overload speeds for long. Still, it could be useful for a quick escape, or to achieve seriously deadly ramming speeds (probably overkill...); it's also a good way to get extra speed when low on only propulsion components and the extra energy requirement might not be as limiting.

Seeing as overloading forces a part to output beyond what it was designed to regularly handle, over the long term the additional strain will cause it to gradually lose integrity dependent on its "burnout rate." So overloading is more than just a tradeoff of energy/heat for speed, as it could eventually render your propulsion useless (though this is not something that could happen suddenly). Unlike weapon overload mechanics there is no chance of negative effects on other attached parts.

Ramming was added earlier as a potential attack when no other weapons are available, but the initial implementation based damage purely on a straightforward static value. To make the system a bit more dynamic, moving robots now keep a tally of their number of consecutive moves in the same direction and on impact calculate damage based on that value along with total mass and speed. This adds a bit of realism, and while not as simple to calculate as a static value, it's a lot more fun doing extra damage when you are going really, really fast or carrying a lot of mass. Effective momentum is increased even further if the target is moving directly towards you in the opposite direction.

Melee weapons also gain damage bonuses based on momentum at the time of attack, so rapidly charging a target while slicing into it with your electro-blade will have even more desirable effects :) If flying, you may want to turn on those afterburners (via propulsion overloading) shortly before spearing a target with your alloy lance!

Disruption is a new property that some electromagnetic weapons may take advantage of, creating a smaller sub-category of EM weapons with a special purpose. By design they will generally cause less damage to a target (and therefore less corruption, the primary side-effect of EM attacks), instead relying mostly on a chance to temporarily disable whatever part they hit, or even a core.

A disabled core means that a robot is essentially shut down for the duration. Shutdowns weren't possible before so this is a newly implemented feature that could possibly be used in other interesting ways in the future.

Using a powerful EMP blast to disrupt a group of swarmers. Two are shut down, and a third starts to retreat around the corner because its assault rifle was disabled.

For now Cogmind is going to be immune to the effect of disruption, as it would most likely be incredibly annoying and have too great a random negative impact on a build. (EM-caused corruption on the other hand will continue to be an important danger, especially in the late game.)

One common roguelike staple is noticeably missing from the game: consumable items. Though considered in the original design, in most cases potion/scroll/etc. equivalents turned out to be illogical and/or non-essential for interesting gameplay, and even less a requirement since all your equipment is destroyable anyway, giving it a somewhat "consumable" element since you'll be changing out parts fairly frequently.

There is, however, still one role of consumable items that could make for more interesting options, that of very powerful limited-use items. These are already possible to an extent by applying huge energy or matter requirements to usage of a part, but this method doesn't effectively extend to all part types; besides, it would be nice to have some powerful disposable weapons or utilities that don't require much in the way of resources but fall apart fairly quickly.

The new "deterioration" property will not appear on just any part--it applies to specific parts so if you ever see that part type you'll know it's a design that deteriorates with use. These parts won't deteriorate while inactive or stored in inventory, but while active they lose integrity at a part-dependent rate. Once their integrity falls to 1, the part is permanently disabled. (Credit: The concept of deterioration was suggested by Lap on Bay 12, so thanks for that!) 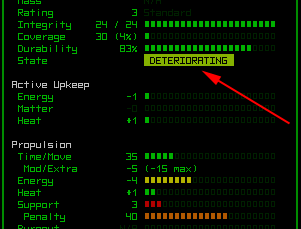 If you see this state on a part, be sure to activate it only when absolutely necessary.