Find out what monsters you can find in the tower of Bulla Bolla! All of them are listed here, did you miss any?

Here is a complete presentation of the monsters in Bulla Bolla! Here you will find all the monsters! If you missed one, play again!

Let's start from the simplest and let's climb the tower: here is the Floro! We remind you that the Floro is really pacific, its cute appearance has deceived many dragons! Careful, as touching it leads to death.
According to experts, its colorfulness derives from the fact that its predators hate the color fuchsia. 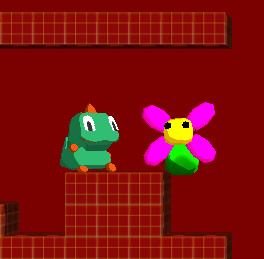 Part made of gears, part of that stuff monsters are made of and part old abandoned games, the Tazzo has an unlimited energy and keeps walking forever. It seems it won't even stop before an obstacle, even if it is impossible for it to advance. Scientists think that they do not possess any intelligence, but other people swear that they have a very evolved community. 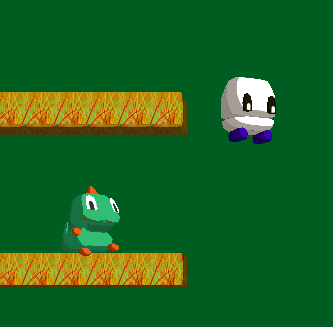 Here is another monster: the Lacrimo! It is afraid of everything and thus flees from anything that moves, in particular from dragons. Some say the Lacrimo is stuffed with sweets and thus dragons love this monster so much that they named a holiday after it. Why don't you open one and find out if this is true? 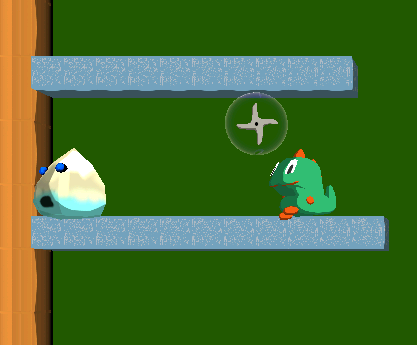 Speaking of sweets, here is another monster that loves them: the Dolcioso! It seems its round shape is due to an abuse of sweets, while its small hat comes from some unspecified place. Able to throw its stunning lollipops, it can reveal to be really annoying! 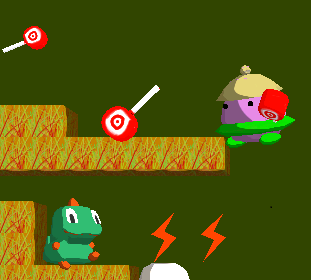 Here is the Big Floro, a too much grown version (and a little washed out) of the Floro! This speciment is rare and fatter, it also loves tranquillity and its species is highly endangered! In fact, while predators hate fuchsia, they instead love purple, making the Big Floro really juicy to them! 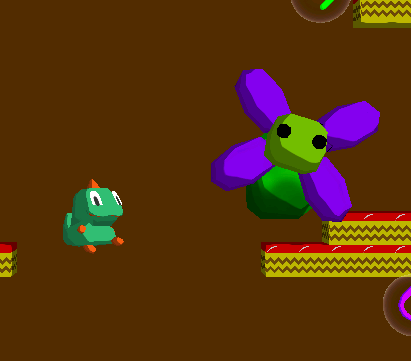 A bit higher in the tower you will find the Jumpo, whose name is not fantasious but really efficacious (the monster tower explorers tend to create names of this kind). It loves to jump here and there using its springy body. Does its unfathomable gaze hide something? No, it doesn't. People say a bigger variety exists as well. 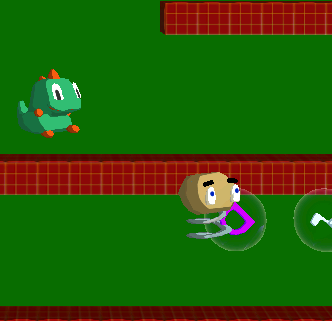 Able to fly everywhere around the tower, the Blubba is a monster that hunters love to catch. In fact, it seems it has small wings that, when removed from the body of the monster, can be used to obtain the ability to fly! The dream of all dragons, after all, is just this. The Blubbas are thus of course endangered. 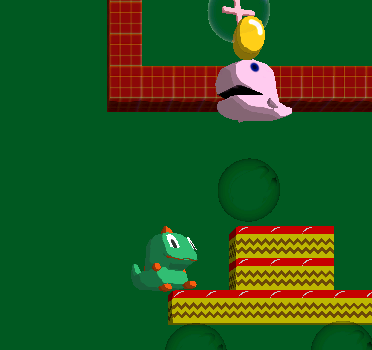 Not only the Flori are subject to mutations... some Lacrimos too (it is not reccommended to meet them) received the same treatment! The Bloddo is a very dangerous Lacrimo, it follows dragons to suck their blood out! Its mocking grin removes any doubt: keep away from it! 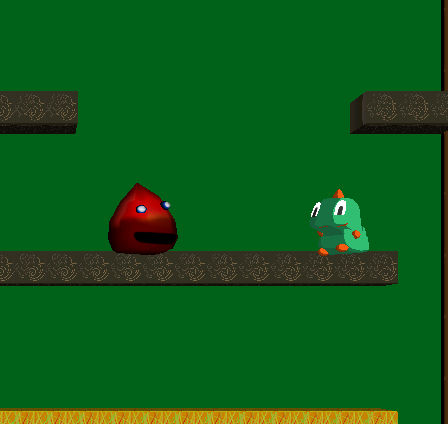 Evolution of the Blubba, the Blubbad seems to have a predilection for theft. During the night, these monsters come out of the tower and enter the workshop of the best artificier to steal their precious creation and keep them in their belly (they are really tasty). For this reason, when one of these monsters gets killed, it is possible to retrieve the bombs from its stomach. 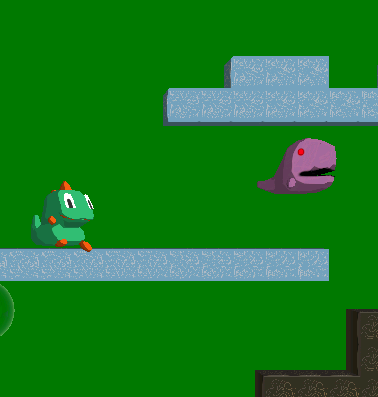 Who would have said it? The scientists were right! This specimen of Tazzo, defined "Tazzo Re", seems to be revered by all its companions. Equipped with a supermonstruous speed, this monster is a tough nut for any dragon. Its crown is quite precious and it seems it has been created by the Tazzo Re itself, which tends to inscribe its initials on the royal headgear to prove that it is the owner. 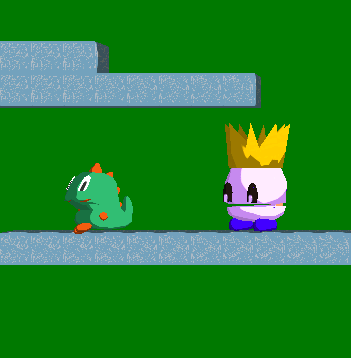 Sometimes, some Lacrimos are born smaller due to a flawed laying. Those small Lacrimini then attach themselves to the only sane monster of the family that, due to its sense of responsability, tries to provide food for everyone. The Lacrimo Train thus is born. It seems the smile and colour of these monsters come from the strong sense of belonging to the family. 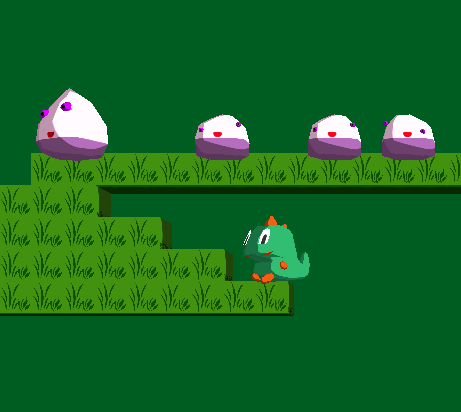 The Splendo is not a real monster, but it always lays in the tower waiting for the opportunity of an ambush on a dragon. This is the enemy number one of every dragon, the natural opponent of its species. It is equipped with a long lance and a pair of big boots. 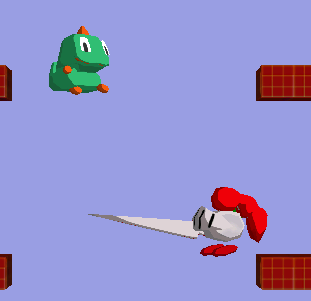 Only one dragon was able to see a Tazzo Gran Re and it took a photo shot, which you can see here. The other dragons do not believe him and say it is an accurate photo manipulation, but the doub that the Tazzo Gran Re exists remains in the minds of everybody. Only the fastest and biggest Tazzo, according to legends, can become a Gran Re. The scientists agree on the fact that, even if the Tazzo Gran Re exists, the dragon of the photograph is a charlatan. 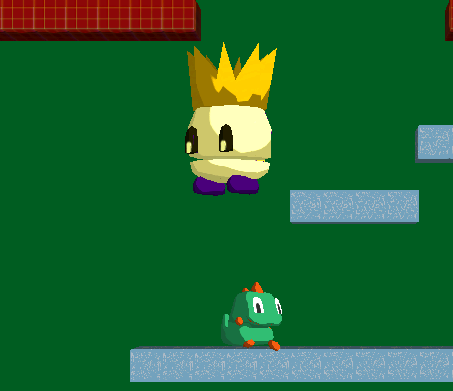 It hides only on the highest floors of the tower and doesn't move a lot, but it can be really dangerous: it is the Piano, a big monster which has a bad habit: create other monsters! While the Piano is, after all, very pacific, the monsters that come out of it, called Noto, have malevolous intents. They won't exitate to kill you! It also seems that the Piano is immune to bubbles, but it has a thing for music notes. 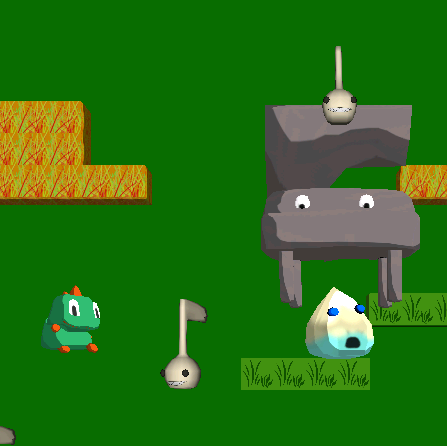 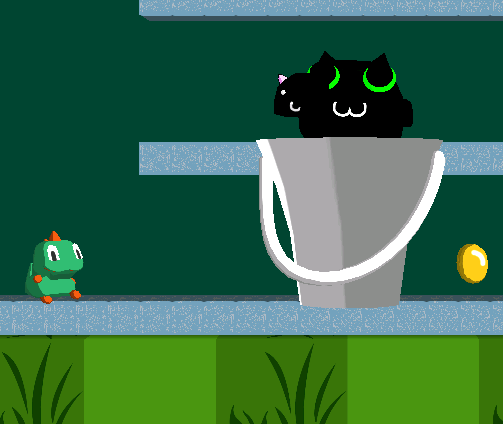 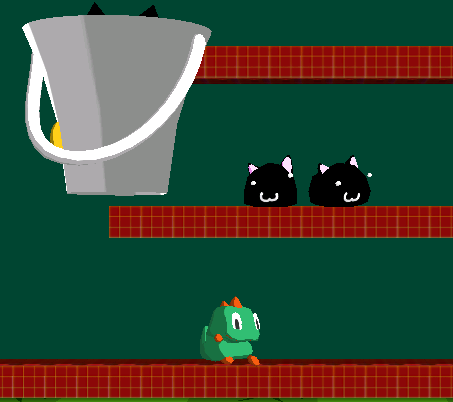 It does not end here! There is yet another monster. It cannot be stopped, it is immortal, indistructible, insatiable. This is the Big Bad Blubba, the most ancient and most dangerous form of a Blubba! It hates everything that moves and also everything that does NOT move! Dragons? It hates them too!
It seems it will appear when the dragons take too much time in climbing the tower and thus their scents can be smelled from afar. If I were you, I wouldn't stay behind back just to check if this is true! 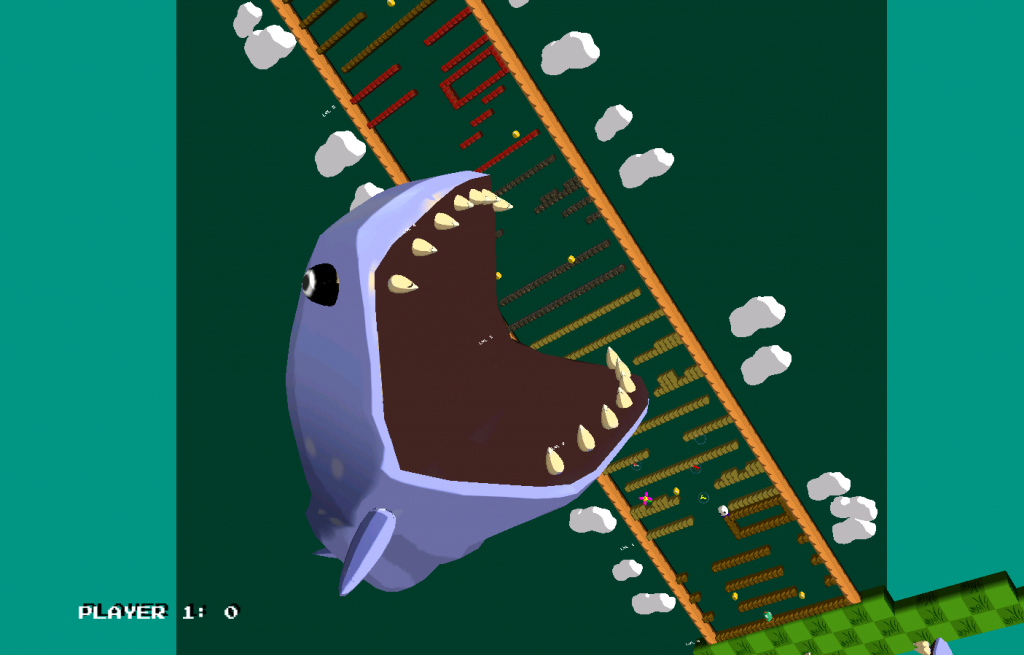