Talking about the level design and its art generally.

This time we take a look at the creative process that goes into making the scenes of Kalaban. It all begins with an idea, of course, with a written tagline, like "Small town". The scene in our case here is the third scene in the game, and the first "real" level of the game. In this map you get the first glimpse of the open-ended exploration and looting that Kalaban offers to its players. 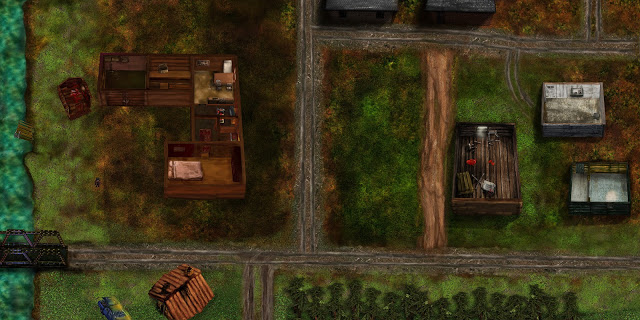 So, my task as a programmer and artist is to make the world work and appear on the screen. But the task of our creative director Tuukka Kuusisto is to draw it and write it first. Building a map, or any game environment, is much like building a house. In that case, you need to have blueprints before you start crafting, you need to know a little bit about how to get electricity and water into the house, and also about waste disposal and such.

In the case of building a level you need to know how it's meant to be played. What will the players see first? What will they click on, what's their first instinct and so on. We're aiming for an adventure / rpg style gameplay here, not a strict rollercoaster or movie ride style game, so it becomes a little bit harder. You can't really force the player to click on anything, or explore the scenes. If the player wants, he/she may just rush through the level like nothing. Of course, that has a drawback later on, but that's another thing. 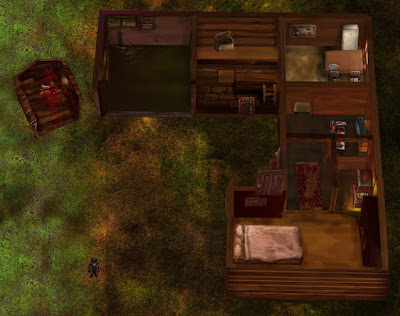 Original look for the big house. Later, we decided to switch the style to a more photoreal style.

When the initial design has been made and all the writing is done, it's Photoshop time! I begin by laying a basic ground for the level, which depends upon if its either built on grass, rubble, sand or on a forest ground. Then I do the structures, the exterior objects and the shadows for the buildings. The last thing I paint / photobash are the interior objects and little fine details. I use a combination of royalty free texture images, once photographed by myself and a little bit of prerendered 3D in some special cases.

Of course, it's not always this simple and straightforward. In the case of this scene for example, I had to re-do the big house and the smaller houses. I was pretty preoccupied the whole spring with my screenwriting studies, so this level took me about three months to build. That's not a very optimal pace, considering that we still have eight more scenes to build for Act 1. 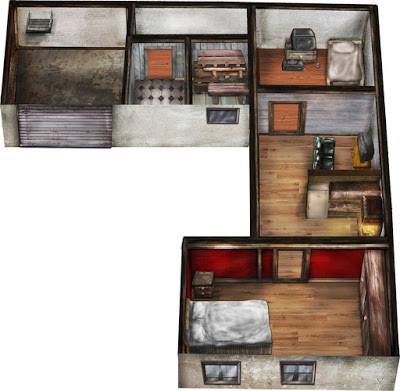 The new version of the house. Looks a lot less like it was painted with left hand in Paint Shop Pro.

The style and theme we've chosen for our game is close to realistic locations, but with a touch of painted and drawn style. The hardest things about building the environments is to keep them fun and entertaining, and also believable at the same time. They're not abstract, weird mazes, but exploring them needs to feel interesting. 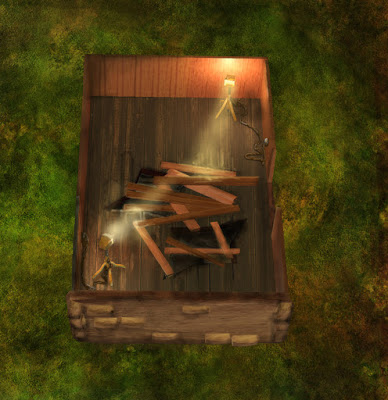 Earlier version of one of the houses in the level. Like our creative director said:
"It looks like a giant sandworm came through the floor."

Most of the things in scenes need to make sense, like where do the roads go, are there paths in there, what can be found inside buildings, do they feel like real locations and so on. It's like building a movie set in a sense that it looks kinda real, but there is this layer of video game narrative and simplification.

Well, that's it for this time, thanks for tuning in! We'll be doing another feature about the scenery in the future, going more in depth in to the technical stuff of it.

Nice "hand-crafted" graphic style. I like it a lot!

Thanks! We've put a lot of time and effort into the environmental art and character animation, so its nice to get some feedback. We still do have a monumental task ahead of us with all the characters and scenes.

Developing games full indie is quite laborous and unstable process. In that style you have no publisher, no backing and have to develop the product with your own money and own time.. Hopefully we can make it through!

Best to the Fusion. Those dudes really spend time for design. Respect to you friends. I hope someday I can make good gfx and join these like projects. Maintain I rockin pixels. :)