This article explores ASoD's past and asks for feedback to assist in its future. It is a look back on the previous versions and how they improved ASoD.

9+ months of work
The other day I was looking at some old files on my SVN repository, ones I have not edited since I first started. I saw this:

Yes, I have been, basically alone, writing Among Seas of Dust for over 9 months. The most time other people were helping was 2 days, and they contributed very little and got bored of the project very quickly. ASoD has come a long way since version zero.

Where We've Been
In versions 0-1, NPCs did not patrol, trade, or even engage the player automatically. They sat perfectly still around a static spawn point and waited for the player to either bump into them or shoot them once. This did not make for a realistic or exciting game in the least. In addition, there were only 3 solar systems and no actual factions or standing system. 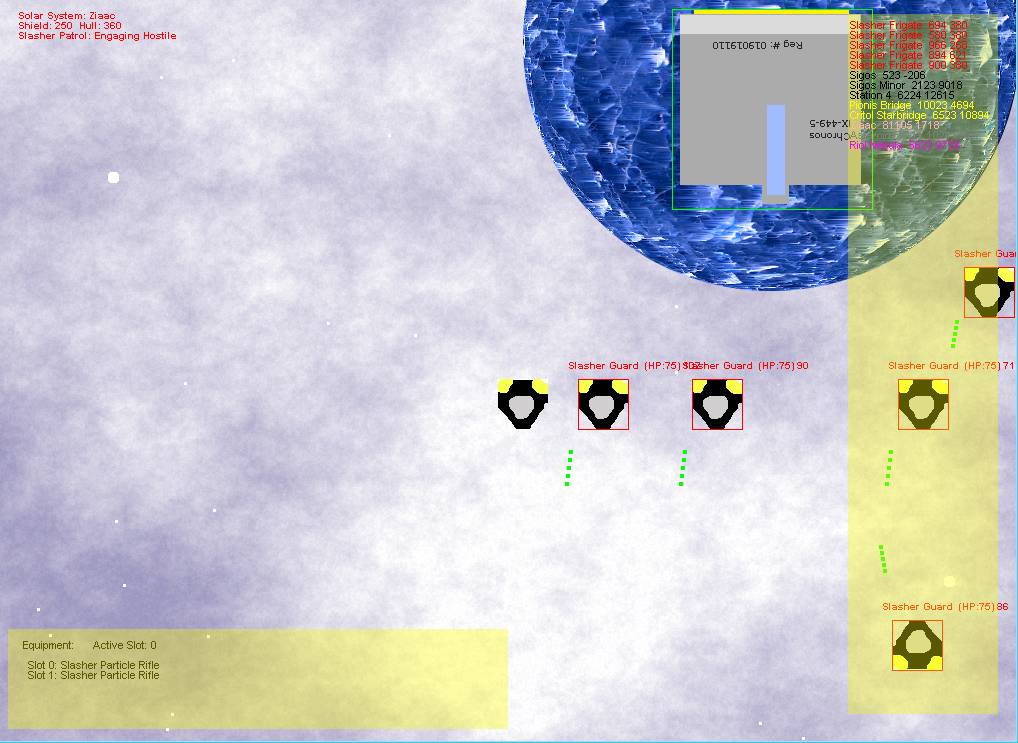 However, in version 0.2, the first one I released to you, I added the ability for them to trade and patrol. There was also a standings system, although it was basically invisible to the player, that prevented you from simply docking at a random station whom's people hate you.

But there was a problem: the player could take control of a trader by sheer luck because some of the destination nodes would spawn at 0,0 which is always at the same spot on the screen. This meant a player could lead a trader to a new position.

To solve this problem, I added a mode that has been infinitely helpful ever since: the debug overlay. This overlay has not changed much since then, today the only change is that it shows the no warp zones for NPCs.

The overlay draws the source and destination of NPCs and draws a line between them and their destination. It also tells who is going where from where. Using this, I determined that undeclared cosmics were being read into the pathfinding code and were always at 0.0 . I found that by capping the cosmics, making the array only large enough for the universe to exist, the problem was solved. This release was under ASoD 0.25, because of its very minor changes.

ASoD 0.3 was an interesting release that was mainly cosmetic. For example, it added a main menu and sub menus. It also added an indicator that showed if you were out of mining ammo. But the main features it added were a new ship, a research frigate, and modifiers. Game modifiers allowed you to have random mindless fun with ASoD and allowed me to debug the game without worrying about saved games or being shot.

These modifiers, initially also included the ability to turn sameSpeed off. sameSpeed was a piece of code that forced the player and all NPCs to move at the same speed (1) and forced NPCs not to warp.

This new tool allowed the player to access the debug overlay and some cheats such as not dying. It also has some tools that allow NPC aggression to be isolated instead of spreading to the others in their group. All of these were useful tools.

ASoD 0.4 added some very good features. Not only did it add random pirate spawns (and the framework for more stuff like random lawful spawns that has yet to be used), but it also added the starmap. The starmap was a feature people has been wanting for a while. People were having trouble navigating interstellar space without a map. So, instead of only having to remember the route, you can now see the route.

The starmap also allowed you to see your position in space, making it much harder to get lost. Most importantly, the starmap renders as you explore the universe. This means that if you want more navigational information, you have to explore.

An in-system map was never added and never will be because of the navigational system in-game. Thanks to everything being based around your coordinates, you do not need to visualize anything to navigate.

A few other things were changed, such as no longer being able to kill something simply by lining atop it and opening fire until it dies. Now they move off of you to the left. Some performance was gained as well by grouping several FOR loops.

ASoD 0.5 was mainly a balance release. It expanded and balanced NPC vs Player combat by equalizing their ships. Now, a player's celeric class frigate has 200 HP just as an NPC's does. Before this patch, NPCs were significantly weaker than the player. To compensate, passive shield regeneration was added to both the player and the NPCs. The gun damage was also re factored by 2n+2 so that both sides have a better chance at each other.

ASoD 0.6 took the old ASoD and turned it upside down. It added two new tools, such as the trade tool and the standings tool. These tools added a new level to ASoD. It combined this with new gameplay such as NPCs properly warping, new explosive effects, new standings system, and finally warp drives being disrupted by weapons fire.

In the above image from my current development of 0.7, you can see 0.6's trade tool. It's as simple as Googling something, except that it only cares about places you have visited. So, if you need to know prices in Geol you must visit Geol at some point.

The standings tool on the other hand allows you to see if you can sell to those groups. In the ASoD 0.6 standing system, being negative is hostile, and being positive is friendly. However, if you go somewhere where these factions exist and they see you, they will all warp to you and engage you. Having a standings indicator that shows everyone allows you to plan ahead.

Where we are Going
ASoD has come a long way since version 0. The future, of course, is detailed in this image that shows my original sketch for the ASoD universe. The completion of this drawing is the final release. However, it should go a lot faster now that most of the gameplay code is in place. Only a few tiny bugs and a few tiny missing features need to be in ASoD, and these will be added in 0.7 .

Feedback
If you have a suggestion for ASoD's future, please, this is now the time to get it to me. Version 0.7 is being developed, and after that only 3 versions more will be released (unless an expansion pack is done). Now is the time for you to send me your comments. Until then, fly safe.