I try to keep you guys posted every few days about the work in RPC, usually giving you a nice news bit at every landmark. But this landmark is a biggie, so you're getting a mid-landmark update of what I have been working on!

I try to keep you guys posted every few days about the work in RPC, usually giving you a nice news bit at every landmark. But this landmark is a biggie, so you're getting a mid-landmark update of what I have been working on!

The Village Center is now operational, in the future you will only be able to build one. A close approximation to the village center's function is like the "Construction Yards" in classic RTS games like Command and Conquer. When you first start a new game, you'll have somewhere around a dozen villagers, and no buildings. Then you will find somewhere on the map to place your Village Center and your little guys will start putting it together. Once built, you'll be able to start building other things in-range of your center. The villagers working at the village center will automatically start building objects on the map you drop down, so make sure you always have some workers at your village center or nothing will get built! :)

Now, all the buildings contribute to your maximum building/harvesting range. Your village center is the only building allowed to be placed anywhere on the map (to get you started). But, after that you have to build within the constraints of your build range. But, every time you place a building, that range grows. In the future you'll also be able to build cheap "range extender" buildings, like Guard Towers and your global range will "level up" as your population grows.

I've added abandoned buildings that can be placed in the map editor, these buildings are pre-placed on maps and the player has the option to rebuild these for a fraction of the original build costs and start using them. The current plan is every single building in the game will have a "abandoned" counterpart. So map makers could make little "abandoned villages" other players could use on their map.

I've done a lot of tweaks to the AI over the past few days. One example is I had originally I had planned that the gathering workers at the Stone Masonry, Lumber Mill, and other gathering or storage buildings would deliver their resources to the Village Center itself and then the builders would fetch the resources from the Village Center and take it to build sites to start working. But instead, the Village Center now no longer carries any resources what so ever, and the gatherers just take goods directly to new building locations automatically, making the process a lot more fluid and natural! You can see some of this action in the screenshots below, where the villagers in red (Lumberjacks/Stone Masons) are taking materials to the build sites being worked on by the villagers in brown/green (Builders).

Screenshots of various building and AI mechanics, featuring many of the new buildings. :) 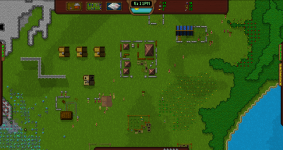 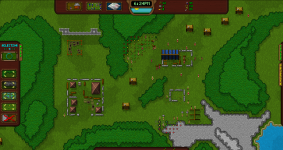 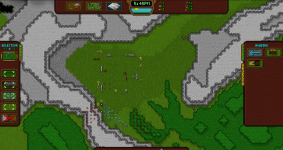 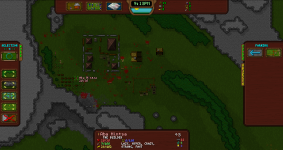