A quick overview of what is new in build 6 of Readapt. Download, play and give me feedback that will impact development for the better!

It's been awhile but here is the next build of Readapt. This build comes with the biggest update to the game yet. Head over to the download section for the standalone Windows version or you can play it right in your browser if you click here, which is a much smaller 23MB download compared to the last build which was over 100MB.

Please familiarise yourself with the rules and controls which are included with the standalone version, if you are playing the web browser version you can download the readme here.

So what's new in this version?

There are new ways to customise your experience, the last build only let you tweak health values and if you decided to play against AI you could only play against 3, all at once! In this build you can pick between 1 to 3 AI opponents, adjust the game speed and change game modes. You can also change the volume of the music or sound effect under the options menu. 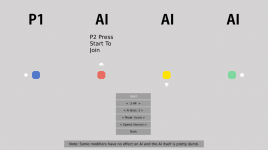 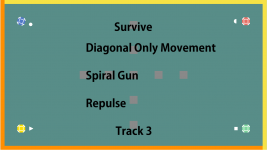 By default Readapt is set to "Score Mode" which like the name suggest works by giving a player a score for completing an objective. A player wins when they reach the score of 5. Two new modes have been added, the "One Round" is simply one round great for quickly settling disputes and "Stock Mode" which assigns players with five lives which are deducted if they die. After some experimentation I decided to leave the objectives in for the stock mode, so a round does not end until it is completed.

For some time I have tried to think of introducing some form of difficulty that players could choose from before starting a game. A simple implementation of this idea is allowing the player to choose between 3 speed settings: slow, normal and fast. The slow setting runs the game at 80% of the normal speed and the fast settings 120% of normal speed. This drastically changes how the game is played and can make the game more tactical or even more frenetic.

Various UI and visual elements have been adjusted, from background colours being less gross (I'm clearly not an artist), a streamlined modifier notification system and removal of projectile lines. Hopefully this will mean a cleaner looking game that is easier to navigate, with all the information on screen being more visible.

Several weapons and abilities have also been rebalanced alongside a host of bug fixes and of course more modifiers have been added. If you are interested in reading more about what's new you can read the detailed changelog in full on my devblog. I will also be putting up new images, GIFs and a new gameplay video so keep an eye out for that. Download, play and send me feedback!