BUCK's first week on Early Access has passed with flying colors and great reviews! We thought we'd give you a taste of what's in store for BUCK's Early Access future development schedule. We'll try to provide an in-depth breakdown of our upcoming assignments so you can get a better understanding of what's to come and when you can expect to play it.

We made it! BUCK is on Early Access and we couldn't be more excited!
We're doing our best to respond to bugs and issues you've encountered on our release build and we'll do the best we can to implement your feedback on our first patch.

We thought we'd give you a taste of what's in store for BUCK's Early Access future development schedule. We'll try to provide an in-depth breakdown of our upcoming assignments so you can get a better understanding of what's to come and when you can expect to play it.

What we cover on this update:

Bugs are our top priority in any patch we release. They take the blame for any unexpected delays in our development release schedule. That is why we'll do our best to deliver as much content as we can while keeping the game stable and polished.

We're aiming to deploy a patch once every two weeks with varying degrees of changes and content. Some patches might include more narrative content and some might focus on system improvements - what we can assure is that both will have bug fixes and balance changes.

Here are the known issues that we'll attempt to fix over the course of a couple of patches:

We'd like to give a shout-out and a big thanks to all the following users on Steam for helping us improve our game by taking the time to give us their much needed feedback and bug reports:

BUCK's current melee system is something we've been meaning to change for a while now. Since the melee system affects nearly every major system that's related to direct gameplay (weapon slots, basic game input, combo moves, unlock-able weapons, weapon combinations and UI elements), we need to make sure it runs properly before we can deploy it in an upcoming patch.

Here's a quick breakdown of what we call "Melee 2.0" and what it will change in BUCK:

The first major change is how Buck's weapon slots actually function. Currently, you need to equip a weapon to a designated slot and then, mid-combat, choose what weapon you'd like to fire and press the "fire" key. This causes more micro-management in a game that's already pretty difficult.

The new system changes this entirely, see image below. 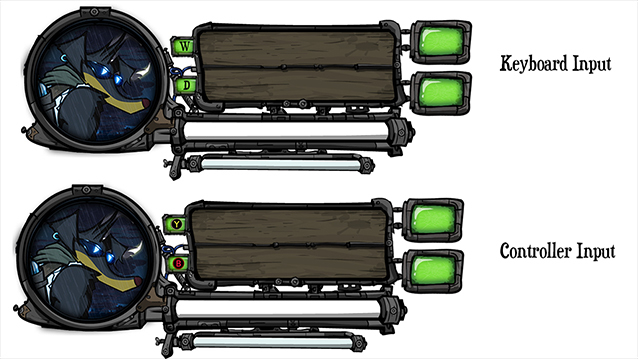 The weapon slots themselves will now be bound to pre-determined keys (rebindable on Keyboard and with alternate Input schemes for controllers).

This means that after you're done equipping your desired weapon over at Buck's home - you can press the key that represents their slots to use the weapon in combat.

The second major change that Melee 2.0 will bring is that it should resolve the inconsistency issues that some of how have been experiencing in BUCK's combat. This is due to a complete overhaul of how we treat both the enemies' and Buck's damage output.

Currently we use a system that is tied to the animations of the characters and It looks something like this: 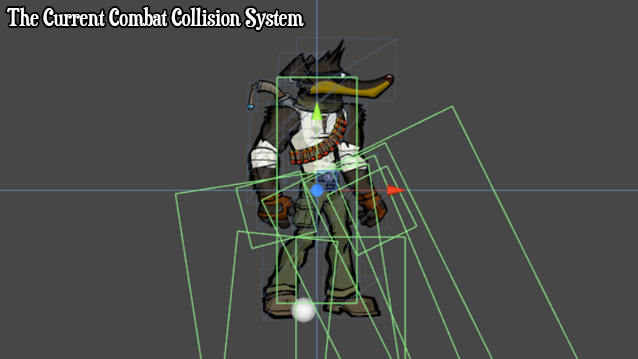 See the green squares on Buck's hands and feet? These are our current damage indicators. The bigger ones are what we use for ranged weapons like the shotgun and revolvers.
Enemies use the exact same system.

Initially, this system allowed us to create units with a wide variety of attack options. In the long-run, it's reliance on animations yielded inconsistent results.

To understand what Melee 2.0 will change, take a loot at the enemy everyone loves to hate ;) the Hyena: 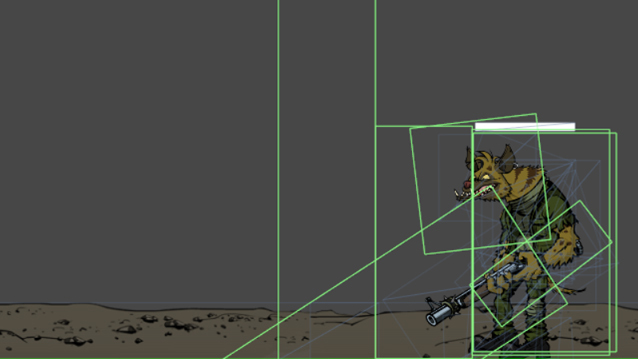 Note the tall squares in-front of him. These colliders serve as "detectors" to tell the AI when Buck is in-range to activate an attack. Based on his distance, the AI changes his attacks from "shoot" to "bite".

We want to utilize this position based principle to Buck's melee and ranged attacks, thereby completely removing the dependency on his animations and focusing on "damage zones" that can be modified even further by weapon attachments (range, number of enemies hit per attack, damage type and more).

This should completely remove any inconsistency caused by the current system and make Buck's damage output feel a lot more structured and precise.

Lastly, the third major change will be to how we display combos in the Tips & Help menu. The new system will cause all combos to take your equipped weapons into account instead of input.

As you can see, this is by no means a small system. It affects many other aspects of the game and so we want to make sure it's working as intended before releasing it.

This is the biggest thorn in our side right now because the current dialogue system severely hampers our narrative expansion progress.
We want to add more variety to dialogues and increase the impact of choices you make in dialogues and the old system is extremely uncomfortable to work with.
Currently, any dialogue is saved in one master file. That means that any change we want to add into the game (like talk to X to get Y and change the following Z objects to something completely else) they are saved on the same file. Having one file per character makes it really difficult to keep track of changes and make any adjustment without breaking the rest of the dialogues that are found on the master file.

This is how Mug's dialogue currently looks: 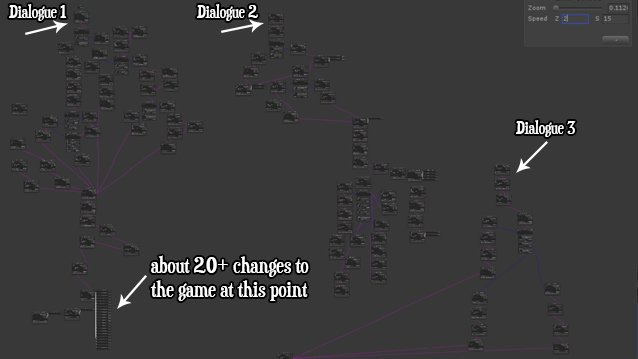 These are the kind of things that happen when your game becomes a lot bigger than what you initially plan. Having one programmer to code all this takes time, but the game is stable enough for us to make changes to existing systems instead of coding from scratch.

Adding improved UI for Gal to use in the editor is just the first part of optimizing this system. The second part is to separate all dialogues to separate files, which means that if a particular dialogue breaks anything - it will only affect the current dialogue file instead of breaking all of the character's dialogues.

The third and final part of optimization is that Gal would have to re-make all the current dialogues in the game.

That's why we plan to hold a poll and ask you guys a critical question about our narrative delivery. We'll expand on this further down the line as this article is pretty lengthy as it is.

Melee 2.0 will allow us to add new enemy types!

Surveyors
"They scout the dunes, ever hungry and hidden. Surveying the enemy's weaknesses to fire a single, perfect and fatal shot."

The Surveyors role is usually filled by Lynxes and Coyotes. Hungry for blood, they will soon be joining the Vulture ranks as a new enemy type! 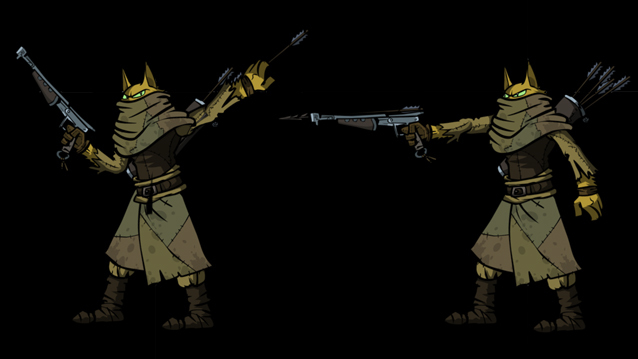 These guys will have a different set of rules for their AI. They will attempt to distance themselves as far as they can from Buck to find safe location to fire from afar.

They have two attack options:
"Fire Crossbow!" - Reload and Fire a Crossbow arrow in a straight line towards Buck's location.
"Coward's Feint." - Quickly stab Buck and roll away for medium distance.

We're pretty certain they will overtake the Hyena's place of honor as our "most-hated enemy". They are quick, evasive and they can deal a lot of damage if left unattended for long.

Firecrackers
"You can hear them laugh in the distance. Once those little bastards get on high-ground, they'll start raining down fire and destruction; making sure everything stays burnt." 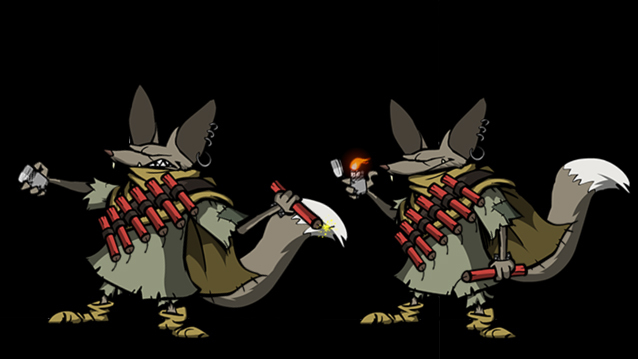 The Firecrackers may come in different shapes but they all have one thing in common: size. These little guys will function similarly to the Surveyors AI. They will attempt to distance themselves from Buck and land on higher ground, if they can find any. They throw sticks of dynamite that explode after a short delay, damaging any unit in it's area-of-effect. (enemies included).

They have two attack options:
"Fire, fire fire!!" - Ignite a stick of dynamite and throw it towards Buck's current location. Dynamite explode after 1.5 seconds.
"Jump!." - Quickly jump to a distant location for re-positioning.

We're pretty certain they will overtake the Surveyors place of honor as our "most-hated enemy".

Two of our "Coming Soon" locations will be unlocked. One combat mission and a new hub area with brand new NPC's and a Merchant!

The Eastern Dunes and the Hidden Camp: 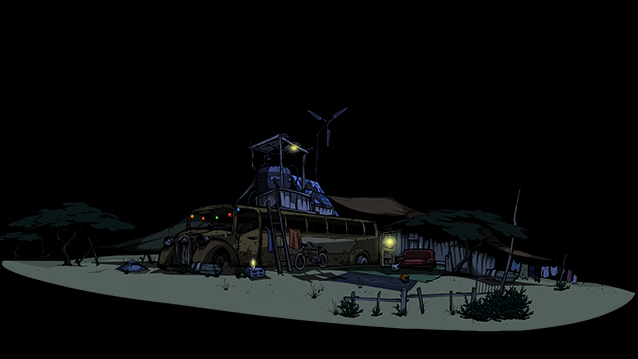 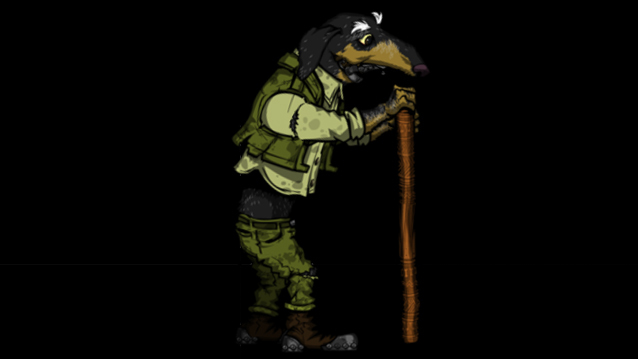 We're still trying to figure out the best methods for adding story content into the game. Since we have a major revamp to our Dialogue System coming up, we do not want to expand on the narrative too much at this point.

The main reason for this is that the dialogues actually move the story forward, which means that any changes that occur in the game are tied to the dialogues.

Once we finalize the new dialogue system, we'll continue to add new levels and story content.

That about wraps it up! We hope you'll join us on this crazy journey and help us polish and refine BUCK to be the best game it can be. You've already done above and beyond by purchasing, playing and giving us your feedback but we hope you'll continue doing so in the months to come.

Watch yourself in the Wasteland.

p.s do you want to help us test BUCK on Mac and Linux? Send me a message here on IndieDB or hit me up on twitter @gal_kfir

First time i see Dev give feedback to users i think all the game Dev's should learn from it.
Its Add a lot of Value !!!

I believe it's well deserved. When gamers take the time to buy our game, play it and actually give feedback? They should be properly thanked.