Breakdown of current and planned UI, some new weapon FX, pilots!, and some gameplay changes.

Let's talk about UI, starting with booting up the game.

The current splash screen is final art, thankfully. One thing we don't have to worry about. 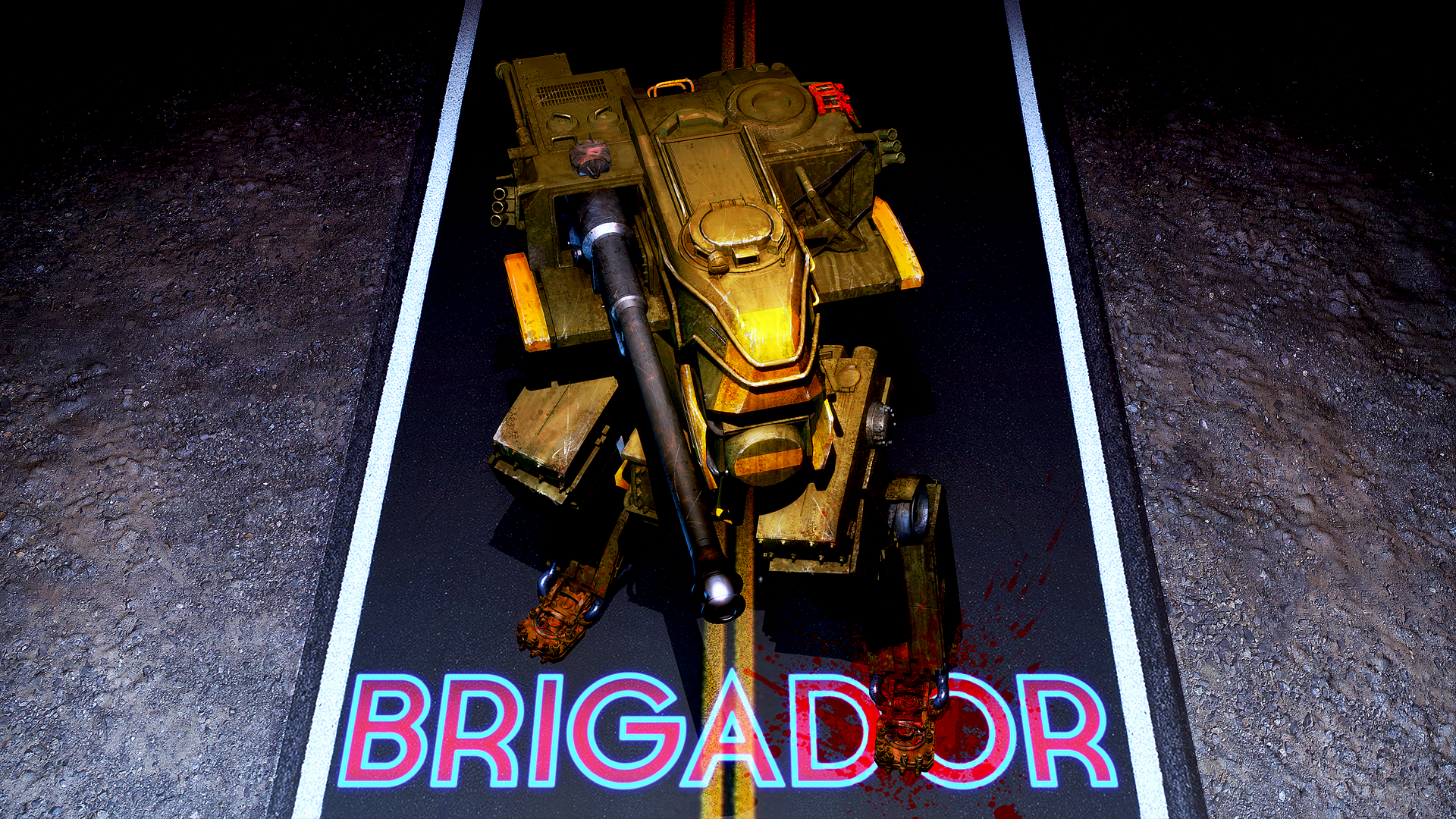 Following that, something we've been throwing around is to have the entire Brigador contract come up as someone boots the game for the first time. Press space or something to cycle to the next page-- we want people to actually be able to read this if they want, otherwise they can just zoom through it-- but they can't actually go into the game unless they accept. Pressing 'N' could just kick out to desktop with a special message thrown in. I really like this idea, but the main concern of course is that we might ostracize some people either because they don't realize it's a fake contract or they don't appreciate getting booted to desktop if they decline. We'll go ahead with implementing it I think, and we can pull it if needs be.

From there we need a proper menu screen done in the same format as the rest of the game selection elements. Playing the game will be "Launch" or "Fulfill Contract" or something, and then there'll be the rest of the roll-out: options, credits, review contract, exit etc. Not 100% sure yet on how to put that part together, but we'll get that blocked out soon enough.

Then we jump to the actual game selection elements. We'll be handling progression in a two-tiered fashion: unlocking and purchasing. You'll begin the game with 1 or 2 pilots, a single vehicle, a single set of weapons to go with it, and a defensive ability (probably the smoke launcher). Every item you can pick in this menu must first be bought, all the way from pilots to the runs themselves. Earn cash by completing objectives and collateral damage during a run, but you have to make it out alive to collect. Some equipment will be better than the rest, it's one of the ways we're allowing players to modulate difficulty in the game since we're not doing explicit difficulty levels. Pilots have no effect on combat, but function as the limiter for unlocking new elements in the game. Since we don't want to overwhelm new players with a huge variety of equipment to purchase, most of it will just show up in menus as "LOCKED" or "REDACTED", and possibly also mention the pilot that must be purchased to unlock. Buying pilots will unlock more pilots as well as unlock a set of equipment for purchase-- this way we can trickle in new variety, and shown through the pilot descriptions the players will have some degree of choice regarding what they unlock when. End of the line unlocks will be really hard vehicles like the Mongoose and Troubadour, as well as novelty profiles like the Death pilot. Final selection menu should look something like this: 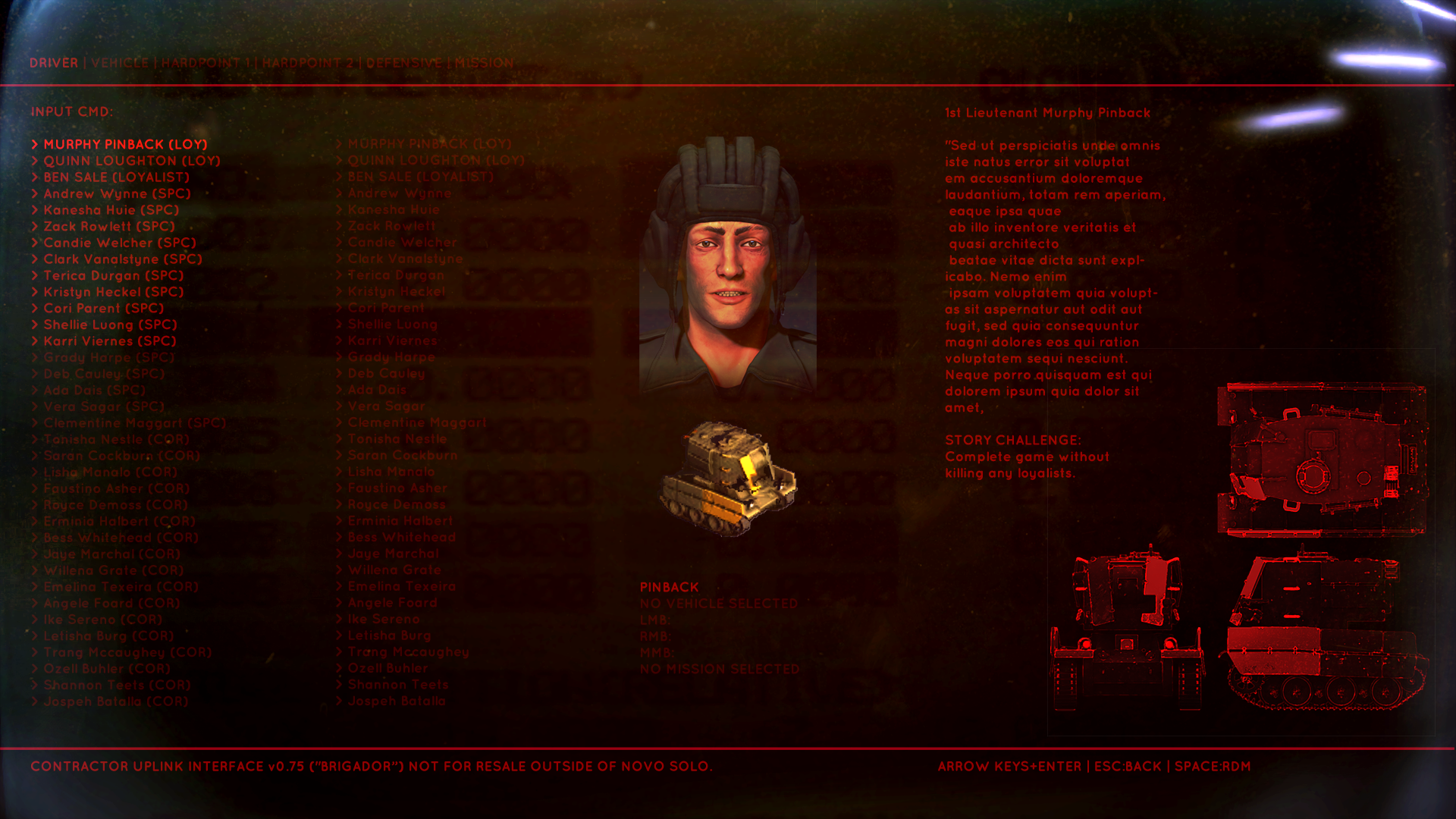 Purchasing and unlocking new equipment, along with providing access to those elements for the player, is also planned as the metric for progress. The intent is to have new opponents / gameplay trickle in as you spend more time with the game. Tying this to unlocks rather than total money earned makes it easier to fine tune the system over the time and cushions it from the many times we'll invariably change the price of purchasing unlocks and the bounty payout for successful runs. Also, it doesn't punish players who save up a large sum early on for purchasing a single very expensive item.There's still a lot to work out yet but we're in the midst of building the new UI now, and as we get eyes on prototypes we'll be able to shift the design as needed.

At the end of every run, successful or not, we'll have a closeout screen that spells out the various stats and rewards. A big motivation here is that we want to pay money out to the player for any skillful play. Survive a long run? Bonus. Kill everyone? Bonus. Kill no one? Bonus etc. There's few things more frustrating than coming up with a fun and compelling way to engage with a game as a player and have that either not be recognized or not be supported by the game. Obviously there are limitations to what we can handle, but it is something we're aware of. In order to enforce the risk/reward mechanic of pushing to a further level vs hitting the spaceport and banking your money, the vast majority of money a player earns on a run will be cancelled out. The "premature death fee" zeroes out everything you've earned if you die during a run-- can't take it with you. As a consolation for dying though you get a token amount added for "funeral expenses", though much of that still gets eaten by the contract processing and currency exchange fees. Love having your shadowy overlords being scrupulously unscrupulous about stuff like this. 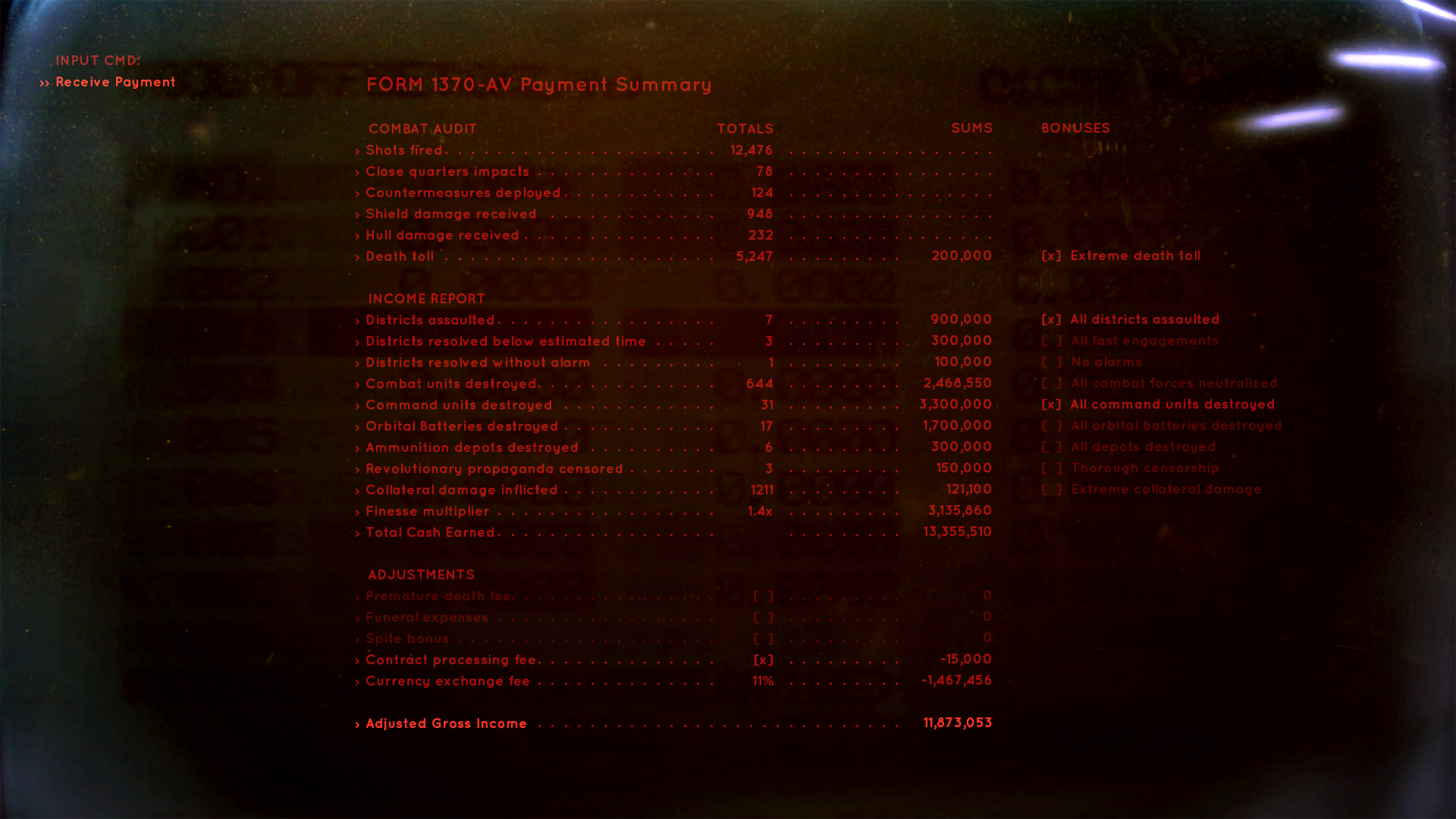 Moving away from UI, we've got some new explosions and weapon effects in the pipe. The old ones are over a year old at this point, so long overdue for having another look at it.Here's a sample of new muzzle flashes:

In the above image you'll notice I disabled the tracers; this is another element we're mulling over, having tracer rounds actually be scattered through a magazine as opposed to giving all rounds fired that really high visibility. Personally I enjoy having barely visible projectiles for the standard ballistic weapons, but it does add additional difficulty to the learning curve. Machine guns particularly are good for teaching new players how the aiming mechanics work, but losing the tracers reverses that and makes them much harder to learn. Something to consider.

We also have just added a new flare gun "defensive" ability. For when you really, really want to get people's attention. It's best paired with very fast vehicles or very large guns:

Finishing out the weapons talk, after a lot of talking and testing we've cut weapons swapping during combat. it would take a lot of time to properly balance, present the UI and make it legible, and most importantly, this is a game where you unlock more and more guns, 50 of them, and encourage you to pick interesting combinations of two of them. Makes no sense to put all that emphasis on choosing your loadout only to allow players to randomly toss one of them away in the middle of the run. Loose ammo pickups from dead enemies will remain though, because that's fun.

On a final note, we've been working on new pilot portraits for the game, which fulfill a couple of roles. Most importantly they provide the player with an identification point-- cool little portraits to pick as "the person you are inside the mech". As explained earlier they also serve as a gating method, a tidy and fun way to dole out the enormous number of guns and vehicles in the game rather than just dumping it out on the player like a trash can. Each pilot should also come with their own little story vignette-- a little bit about who they are (can just be a sentence or two), and why they became a brigador, someone who sold out their city/country/planet for money. We like the idea that the first couple of pilots you unlock are just complete dirtballs; they don't cost much to unlock because they're some combination of desperate or hard up. Late unlock pilots are the more heroic types, ones more generally associated as the action hero type, but who are still traitors now because everyone has a price. Which is probably a line that will show up in a trailer somewhere...

Here's a schlub who just got a fresh kicking around but then goes for a contract. "What have i got to lose?" as part of the a little story vignette. Hopefully his face says most of it already though. Compare that with an enterprising pilot in the Loyalist military. Promising soldier who's willing to seize an opportunity when it's presented to her. 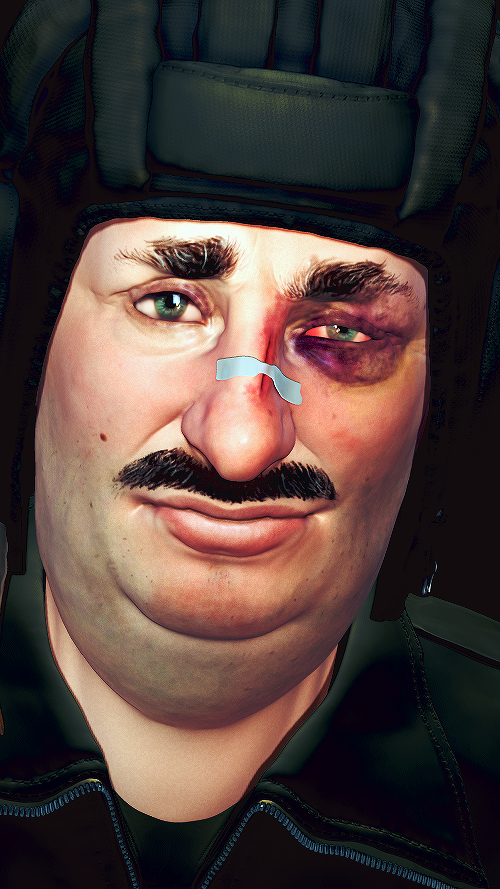 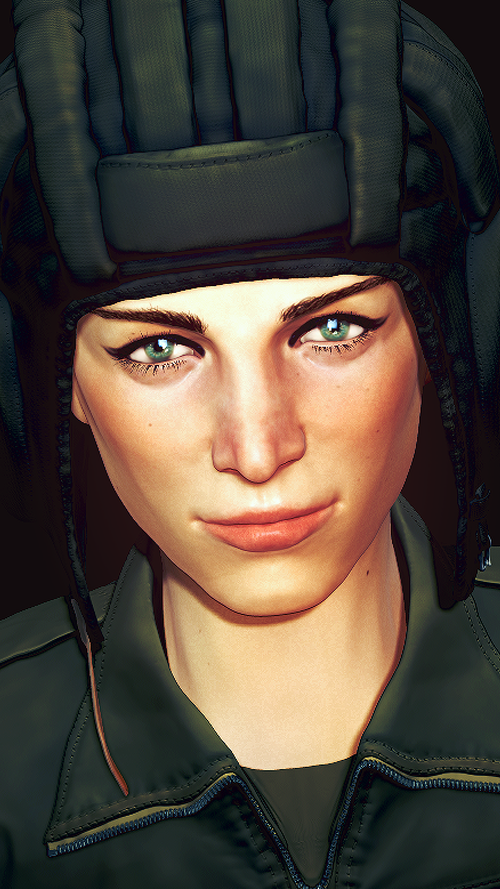 (btw, while both these portraits happen to be of caucasians, the full roster will have a very broad mix of ethnicity split between genders-- we plan to cast the net wide)

That's it for now! Still working hard on this, getting closer every day. Thanks for reading.