In which the breaking of a pot is enacted; menu-scaling is removed; said removal incurs further minor fixes; an issue in mouse-handling is addressed; and a testing-change is removed.

This week's screenshot shows some pots, now in place in level eight: 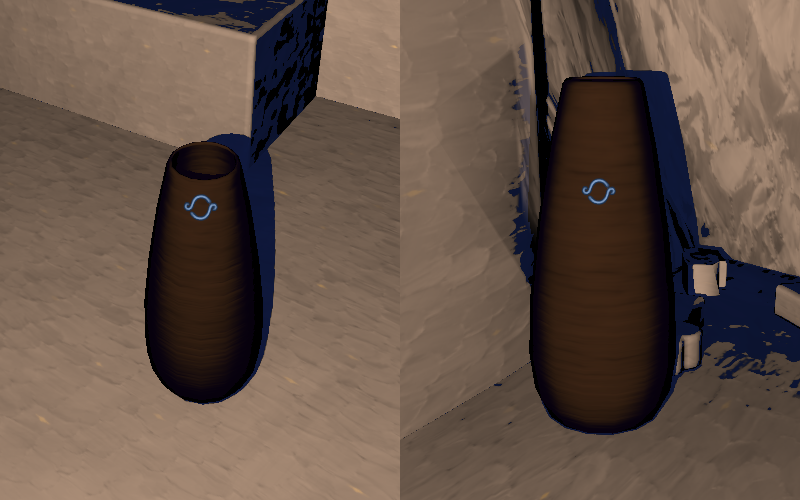 The week just past was a bit of a slow one, I'm afraid: between personal matters and my coming down with something near the end of the week, only a limited amount was done. Still, some things were done nevertheless:

In last week's blog post, I believe that I showed the model for the above pots in the process of being animated. I continued that work in the week just past, in particular creating an animation of said model breaking.

However, I then discovered a problem: as it turned out, Panda3D was automatically merging vertices that were in more or less the same place--such as those of neighbouring shards. This resulted in the shards in some places "smearing" across the space between them and their neighbours.

So, I split the model into two separate files: a static pot, and an animated version that started off with the shards already slightly separated. That separation allowed me to get around the issue of co-locational vertices.

But when I implemented these models into the game, I discovered a new problem: The pots could be stacked, or placed in arbitrary locations--but of course, a pre-made animation doesn't account for any of that!

So in the end I discarded the animation entirely. Instead, I now have a small particle effect of sorts, spawning shards at roughly the right location. They simply fall through the floor and disappear, but I think that the effect works sufficiently well, at the least!

And with that done, I set to work making audio for this breaking. Doing so proved tricky, and I'm not entirely happy with the result that I achieved, but I think that what I have works, at the least!

Moving away from the level, in the week just past I attended to an issue in the display of my menus. Specifically, I removed some code that had been intended to scale menus to account for varying window-resolutions, but that seemed to have been causing problems.

(Indeed, I think that I had one case in which this code scaled a menu down to near-invisibility!)

This is done and the menus are still working, I do believe.

It did incur further fixes, as I recall, being various adjustments to elements that had been affected by the former scaling. There are some minor differences in the layouts of various elements, but nothing serious, I feel.

I also discovered in the week just past that mouse-handling had become somewhat broken in certain screens! Specifically, an earlier change to how I read mouse-input seems to have resulted in mouse-coordinates that no longer fell into the ranges expected by various screens.

Thankfully, as I recall this proved fairly easy to fix!

And finally, amongst the translation puzzles I reverted a change that was made for testing purposes, and that I'd forgotten to undo.