Get yourself a PSM and Wii U Developers License and crack into that console market!

Mutated Software (me) currently has a PSM (Vita) and Nintendo eShop (Wii U) approval at the moment and this post will cover how you can too!

Don't want to be on the Wii U or Vita? That's fine, we'd all like to be on some of the other platforms as well (PS3/4, Xone/360, 3DS) but it's my impression that the Playstation Mobile and Wii U Developer programs are meant as a proving-ground/olive-branch to Indie Devs. Also for the record, most of the why Blue-Collar Astronaut got approved is going to be pure speculation on my part, but I think it's worth mentioning what I did that seemed helpful.

Potentially Big Caveat
Blue-Collar Astronaut is a Unity 3D (v. 4) project. I think it played a factor in being accepted since Unity has done a pretty great job with developing relationships and toolsets with the major consoles. This isn't an exclusive to Unity though, I remember hearing that GameMaker also has such programs and there may be many others. Also, it may not matter at all. Just saying that it's something my game had going for it.

Step 0. A Game
A thing. A whatsit. With the doodads and the hoozits. Make sure it looks pretty enough that if you saw it on steam or the PSN or whatever that you would think "That looks like something I'd click on". It doesn't need to be finished (Blue-Collar Astronaut game isn't, but I'm working on it!).

Step 1. Website
You've heard it a hundred times, but it's true. You need a website. It probably doesn't need to be as earth shattering as these [gamasutra], just do your best. Blue-CollarAstronaut.com was apparently good enough and it's basically a twitter bootstrap template. In truth, it probably just needs to look pretty/professional, but it can't hurt to describe why people would play your game and what it's about. I recommend bootstrap just because I think it's the fastest way to a professional looking website. However, LOTS of people know that too. So if you can find some way to differentiate yourself, well... more power to you.

This might be a bit overboard, but you might also check that you're not encroaching on anybody's trademark using this tool [United States Patent and Trademark Office] 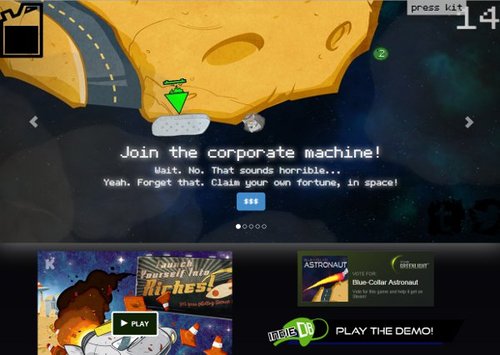 Don't have a website host? I like the Amazon Web Services (AWS) architecture quite a bit. I've heard that even Netflix uses it, and they're direct competitors with Amazon. I believe the first year is still free as well. If you've never ran a website before go with Amazon's customized Linux distro and check out Amazon's LAMP (Linux Apache MySQL PHP) setup page (You probably won't need the MySQL part).

As far as domain names go, I've been using NameCheap.com ($10-$15) but there are plenty of other DNS registers you can go with.

So at this point you have:

And you're super proud of yourself. And you should be! Way to go you!

Step 2. Video
While I'm not positive a video was necessary, I did have one available before I heard back from anyone. Could have been coincidence, but chances are you'll need a video at somepoint anyways, so why not just go for it.

I made a news post on How to make a video in Blender (a really cool AND FREE tool) that you should check out if you're on a budget. I've used it in conjunction with FRAPS ($37) to make a few videos now and have found the experience initially frustrating but with great results in the end.

Below is an example from my Kickstarter you can compare your video too. I bet you can do better. I believe in you!

See. That wasn't that great. Although it was extremely funny. One up me, and let me know about it. Just rub it in my face, I dare you!

Now just upload your video to Vimeo or YouTube and put it on your website. You're almost to the super fun part!

Step 3 Apply!
Finally! You get to fill out some sweet, sweet, down-right succulent applications.

And wait. And wait.... and wait. Basically, just try and forget about it. Go back to making your game. As you might imagine, Sony and Nintendo get a lot of requests of this nature and it may take them awhile to get back to you. I eventually got a phone call out of the blue one day from Nintendo and Sony got back to me via email. Both took me off guard since I had basically given up on my application by the time I heard back.

Regardless of if you do get excepted or not, know that there are a number of outlets, established and emerging, for Indie games that might be right for you (and me) such as Indie Game Stand and itch.io.

Alright, I thik I did a decent job of not breaking any NDA agreements while still being helpful. Well, hopefully I did.

Thanks for reading, and best of luck to you!

TLDR: Make a game. Make a Website. Make a Video. Submit to Wii U Developers. Submit to PSM. Have a beer (if you're of age).