Today marks the 81st anniversary of the German invasion of France and the Low Countries, and to mark this we are showing off some of the statics made by Cpt Bocquier that will make our maps that bit more special.

Today marks 81 years since the start of the German Invasion of France, and to mark this occasion we wanted to show off something a bit different. To that end we are showcasing two statics made by Cpt. Bocquier that will help make our French maps feel that bit more unique. They say an army marches on its stomach, so hopefully our new field kitchen will keep those bellies full. As for the church (because of course there is a church!), it is the highlight of an as yet unannounced map that we hope to show off soon. 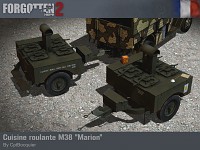 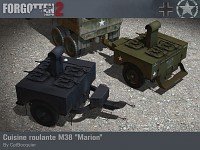 The Model 1916-1936 M38 field kitchen, known to the troops as Marion, was designed to serve around 200 soldiers near the battlefield. Truck towed and wood fuelled, the M38 field kitchen is the result of successive improvements of the earlier horse-drawn field kitchen Mle 1916.

An update to the design in 1936 added a number of changes to the trailer; most notably new steel wheels with inflatable tyres to replace the wooden wheels, a new coupling system and a retractable chimney. In 1938, some minor internal changes were made.

3056 units of the Mle 1916, Mle 1916-1936 and M38 field kitchens were in the French army before the war. As the army mobilised an order for 2500 units plus 500 per month was made but the various manufacturers would never reach this level of production, delivering only 373 M38 before the armistice.

The production of the M38 continued after the armistice to supply the German army. Many of these would subsequently fall into the hands of the US and Free French, who made good use of them. It would continue to see service after 1945, with an updated gasoline fired version put into production in the 1950s. Cpt. Bocquier made our Marion. 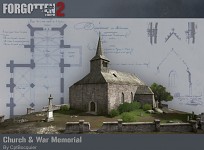 This is a Catholic church constructed in 1657 on the foundations of an older 9th century church that had suffered heavily from the ravages of the Thirty Years war and the Fronde.

At first the church consisted of a five-span nave with two side aisles, with a later extension to the nave adding a two-span choir which broke the orignal rectangular shape of the church. In 1817 one aisle and two spans of the nave were demolished, giving the church its unsymmetrical aspect. 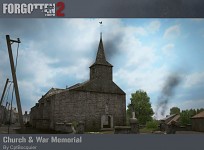 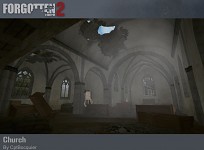 The parish church was dedicated to Virgin Mary, and had a contiguous cemetery. The building was used as a warehouse by the Germans during the First World War, and a war memorial was raised in front of the main entrance in the 1920s.

In May 1940 the church was heavily damaged, with only the masonry still standing after the fight. After the war a new church was constructed in the same place and was inaugurated in January 1960. Once again, Cpt. Bocquier is responsible for this centrepiece static, helped along by the initial work of Tomtom. 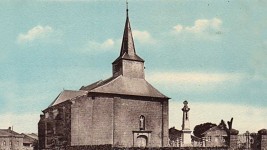 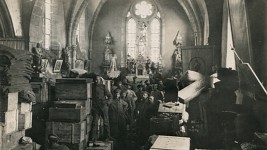 Last but not least: Slayer's tutorial series is now up to episode 16. You can see the full playlist here.