Okhlos is competing in the Brazil Independent Games Festival! We are nominated for "Best Gameplay". Here are the contenders

As some of you may have heard, this week in São Paulo, Brazil, the largest indie gaming event of all of South America is taking place: Brazil Independent Games Festival. This is exciting news for any indie game developer in the region, but we are particularly excited because out of more than almost 700 entries, Okhlos was selected as one of the finalist, and is running for the Best Gameplay category! 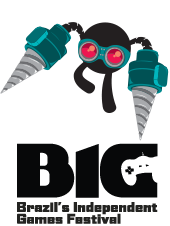 In this category, we are competing against these fine videogames:

Circa Infinity by Kenny Sun

Most of the games haven’t been released yet (just like Okhlos) so we haven’t had the chance to play them yet. We are looking forward to give them a go at the festival. However, based on the trailers alone, you can already say it will be a very tight match!

Once again, thanks to the people of Big Festival for choosing Okhlos as a finalist! Wish us luck!