This week, we explore a new environment, work with mini-maps, redesign old characters, and further develop the UI system inside the game. Welcome to world of Bounty.

First things first, let’s start with the map. Although the map is a very rough stage and will probably change soon for the better, we show off the new map. It shows parts of the verticality of the game and how we want the gameplay to go within the game. Being able to take multiple routes to get to the same place allows the player to handle any situation the way that they want to. Want to sneak up on your enemy? You can do that. Want to kill your enemy from afar. You can do that. Want to dangle from the edge of a bridge with your feet and shoot your enemy upside down? No, you can’t do that but wouldn’t that be awesome.

Moving on to the mini-map. Nothing too exciting here but it’s in the early stages of development and assists the player in navigating the map. We plan to add more things such as waypoints, navigation lines, and enemy spotted icons. With the mini-map, you can choose whether you want the mini-map to spin to point in your direction or if you want the map to stay static and shows which direction you are pointing.

Next is the UI improvements. We now have in the game a way for players to be able to store items that they do not want on their person at all times. This allows the player to pick up more items and collect more resources. With this new system improvement, we needed a new way to interface with it. We now have a system that allow you to drag and drop items to and from other inventories to move items around. This will help in the future as well when it comes to trading with other players. The UI also works on the teleporter now. You can choose which destination you want to go to. It’s a small improvement but a much needed one.

Now for the Art part of the update. We have two updated characters to show. Blaze and Brute have gotten some serious overhauling to make them more fit their personalities and backstory. They feel like more complete characters and look 10 times better than before. Check out the images below or in the images section to see the changes. 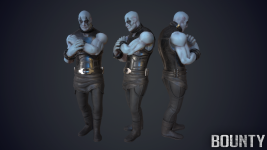 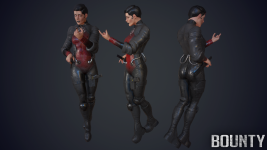 That’s it for this week and we hope to see you back here for the next update which include more characters and hopefully even more awesome. Thanks for stopping by!

Oh wow! A game that features a female character with more clothes than the male. :D This is a refreshing change in the sea of repetition :P

First of all, amazing update. I love the update that you guys make, especially on the UI implementation. Having said that, I'm really interested on how you guys Implemented the 2D styled minimap. is that done in UMG or canvas based?

I've been looking around the forums for some direction, but no avail (the only method it has been discussed so far are render to target method of minimaps).

If your team are cool with it, may I know how you guys implemented the minimap mechanics? or at the very least point out the necessary resources (or tuts) for me to figure this out.

Keep up the good work, and more updates! Definitely tracking.

We are using a render target method. It is a separate actor that is beneath the game that updates position of the map based off the position and rotation of the player. What it captures is a Photoshop version of the environment and other dynamic stuff will be added in game. Hope this helps.

well i guess its the same approach as the ones in forum, but captures a 2D version instead of the map itself. It is something to consider, thank you for your input guys.