Say hello to our little friends, each and every one of them.

In video games, there is very little more satisfying than a scattergun. They are almost universally seen as a strong, reliable weapon capable of dealing a strong and reliable amount of damage. We at Contraption Studios have done little to change this formula, but we have noticed some distressing things about scatterguns in many modern first person shooters. For example, one of the more prominent issues that we have come across is that none of the scatterguns we reviewed were capable of firing nails.

Scatterguns are part of the Slugthrower (or Yellow) category of weapons. They, unlike Magnums, the alternate Slugthrower weapons, fire multiple projectiles per click. Further, the tight spread of these projectiles guarantee high damage at close range, yet as the range between them and their target increases, their troublesome accuracy is brought into the spotlight. However, unlike other weapons in Bloodcrusher II that fire multiple projectiles, all weapons in the Scattergun category only needs to expend one ammo. So while a double barreled chainsaw Rocket Launcher will expend one ammunition per projectile, a scattergun will always expend only one ammunition per click, whether it fires four shots or forty.

Scatterguns are divided into a variety of parts. In order to understand them, let's dissect a basic Scattergun. 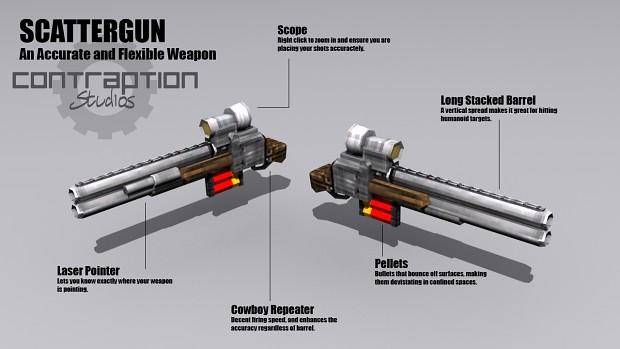 Much like what you saw in our first gameplay video, this Scattergun uses the Cowboy Repeater Body, which, in addition to enhancing the overall accuracy of the Scattergun, also causes it to do a backflip after every shot, which is totally fresh. In addition, the Long Stacked Barrel creates a vertical projectile spread, which is great for taking out your human types. Should your shots happen to miss however, Pellets bounce off of surfaces for a short period of time, giving them a second chance at hitting their original target, or you if you're really unlucky.

As for attachments and secondaries, the Laser Pointer gives your Scattergun a totally MacGyvered tactical sight, and the Scope allows for you to zoom in slightly in order to better see just what it is you're trying so hard to kill.

Now that we've gone over the basics of the Scattergun, let's look at a more advanced Scattergun. 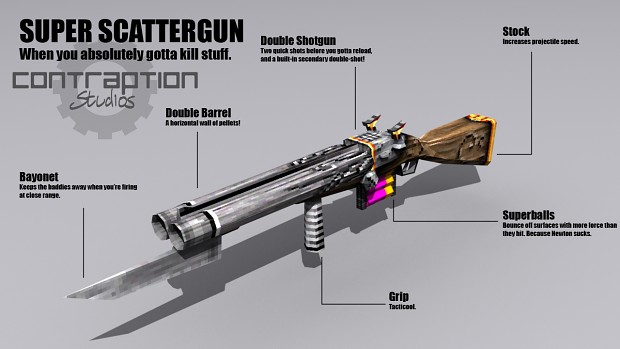 Now this is the Double Shotgun body, which shares many similarities with the DOOM super shotgun. It fires two quick shots, and its secondary fire is to fire them both at the same time. It's Double Barrel allows for it to take down groups of enemies with ease. As for ammunition, this thing fires Superballs. Now before you say; "Oh wait, great Contraption Studios overlords, that looks an awful lot like Pellets", well you're wrong, and when I say wrong, I mean mostly right. Superballs, like Pellets, bounce after hitting a wall. However, they also bounce after hitting pretty much anything else, and they don't lose any momentum while doing so. Increasing their speed further is a basic Stock at the back of the Scattergun.

To round it off, this Scattergun also has the Tacticool Grip and Bayonet attachments. The Grip to further increase projectile speed to something beyond reasonable, and the Bayonet in case an enemy gets just a bit too close.

I love these weapon dissections, they make me drool :D..

We can kick some serious *** with theses.

at this particular moment in time I don't believe I have a healthier or more deeply-felt respect for any object in the universe than this here shotgun...

You're huge! That means you have huge guts!

How many rounds do they fire per magazine? I really don't get the ammo system "per click" you describe.

Guns in Bloodcrusher don't reload; it's an old-school shooter, you can shoot until the ammo runs out. Shotguns shoot somewhere between 1 and 40-ish individual projectiles every time you fire, depending on your barrel and ammunition type.

This is the best thing.