When you find out that you are the son of a powerful demon and a human woman your destiny will change drastically. The mask on your face has been fused with your flesh to prevent your metamorphosis into a demon. 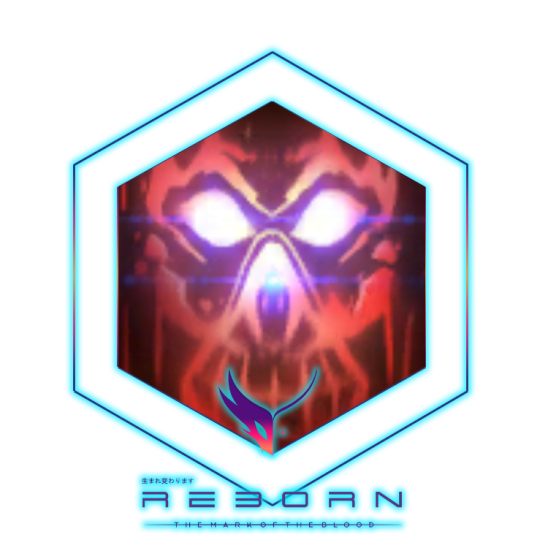 When you find out that you are the son of a Powerful Demon and a Human Woman your destiny will change drastically.
The mask on your face has been fused with your flesh to prevent your metamorphosis into a demon.

During a special event with an AIC Master you will discover your heritage and the way to remove the mask, for a specific period of time, and release all the power of the demonic blood flowing in your veins!

The more you fight as a demon, the more experience you'll accumulate that will unlock 5 different possessions until you get to your absolute demon form, the most powerful destroying and lethal of all, but thereis a price to pay!

The more time you spend in your demon form, the more your humanity will fall away and prevent you from returning to your human form, losing you forever in the Kingdom Of Darkness and preventing you from accomplishing your mission.

Each of your forms as a demon has different peculiarities and characteristics that will lead you to play in a completely different way with each of them:

The fighting style, black magic, skills are different for each of these demons that will possess you, it will be up to you to figure out which form is more suitable at a given time of 'epic clash between good and evil.

Each demon has a personality, a fighting style, completely different weapon and a line of black magic, which you can enhance with special talents.

Today we will talk about your first possession: Belial 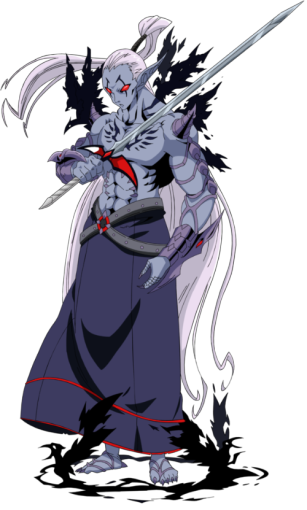 During the Fourth Crusade of 1202, one of the bloodiest in history, which had its epilogue in 1204 with the Conquest Of Constantinopolis, there was a battle that was not reported, by the Church and the Papacy, in the books of history and in the minutes of the time, it was too shocking for the people to know these truths.

The Pope of the epoch, INNOCENTH III, constituted in great secret, a clandestine Order Of Templars, The Order Of The Black Rose: A handful of extraordinary and valiant warriors, aimed at defeating forever the demon on earth. 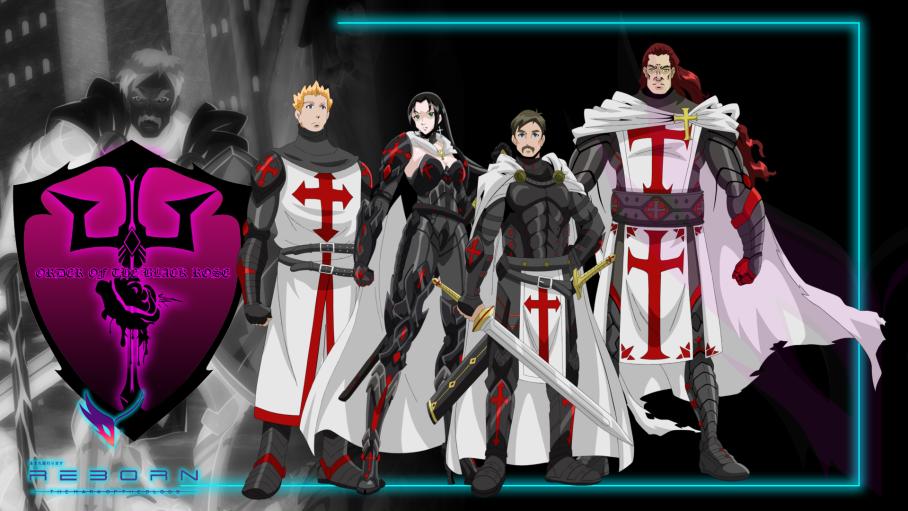 On March 10, 1203 the Order Of The Black Rose arrived in great secrecy at the city of ZARA and was confronted by a legion of demons led by Astaroth and his 5 trusted generals from hell.
The entire population of the city had been impaled and brutally mutilated, minor demons feasted on the bodies of the citizens, feeding on their entrails and drinking their blood: a gruesome sight. 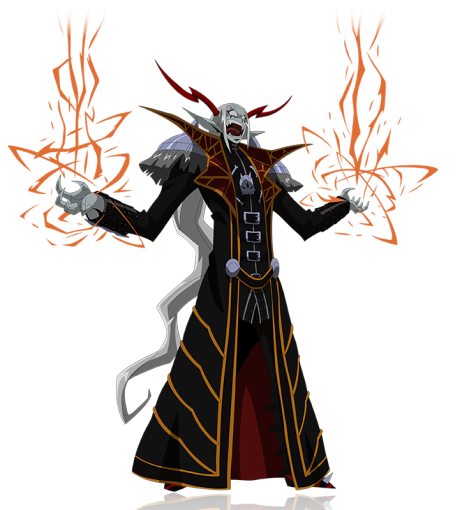 Sir Alexander RothBuckler did not delay, and although the Order Of The Black Rose was infinitely weaker than the 'horde of demons, the order to attack was immediately launched.

The epic clash between good and evil took place outside the walls of the city of ZARA and was so bloody that it dyed red all the land in front of the castle of ZARA, the hordes of demons were infinitely stronger than normal humans, although brave and extraordinary individuals were about to succumb... 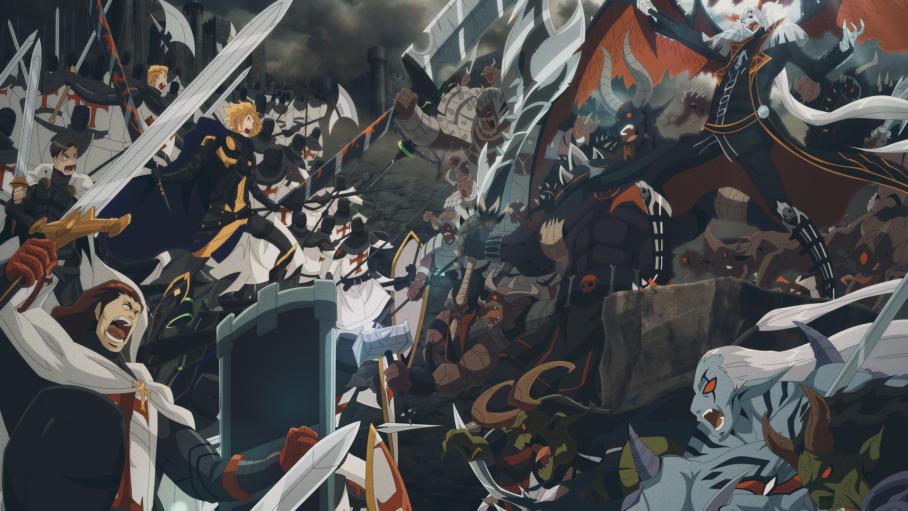 The crusaders of the Black Rose were now decimated and only a miracle could have saved them.

The first general of Astaroth, Belial attacked Sir Alexander, all seemed lost and the Black Rose was about to be wiped out, Sir Alexander responded blow after blow to the slashes of the mythical Katana of Belial, but the fight was infinitely unequal. No human being could ever compete with Belial, the strongest general in hell!

Sir Alexander now at the end of his strength, wounded, bleeding and pierced at the heart decided to play his last card: with his last breath he extracted one of the thirty coins with which Judas was paid and pronounced this invocation:

Time stopped, for an eternal second everything was still and lifeless, Belial's flesh melted with that of Sir Alexander condemning him to eternal damnation on earth.

Sir Alexander got up and with the strength of Belial he began to kill all the demons that stood in his way, tearing them apart like pigs, was no longer a human being, but a bloody monster asseted with vengeance.

A sort of shiver of fear shook Astaroth in the deep, now left alone with his 4 generals disappeared in a tornado of fire... 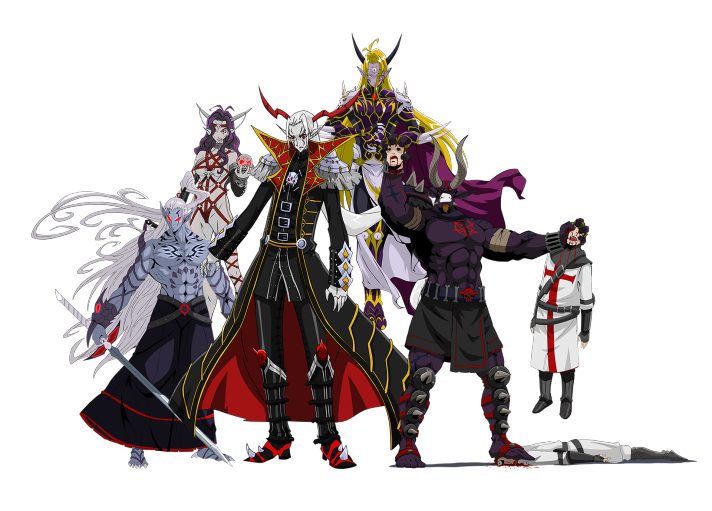 The battle was won, but at what price? The life of a valiant man faithful to the church lost forever in the kingdom of shadows.

Only a dozen or so Black Rose crusaders remained on the battlefield and, afraid of what Sir Alexander had become, they turned their weapons against him.

Even the friends with whom he had shared incredible battles had the tips of their swords turned against him.

Sir Ryan, second commander The Order Of The Black Rose 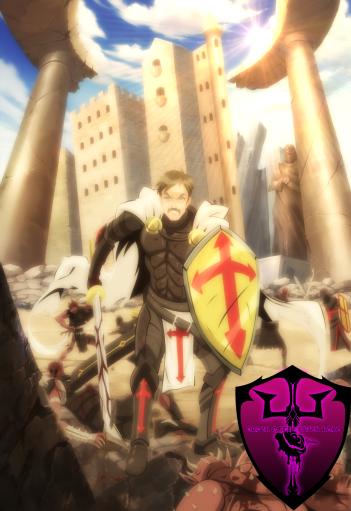 In the total coldness of that massacre, a grin was drawn on Sir Alexander's face, his face turned into something bestial, demonic and certainly not human.

Sir Alexander, with the blood dripping from his hands, drew with his index finger a seal in the air, a chasm opened between him and his companions, flames flared up, a huge beast came out, it looked like an infernal wolf, the blood of all present froze in the veins.

Alexander jumped on the back of that monstrous infernal being, who roared, roaring so hard that the earth threamed under the feet of the people. He turned once more to his old friends and companions, smiled and disappeared riding into the unnatural darkness that enveloped the battlefield..No one ever saw him again.

Name: The Good-For-Nothing second only to lucifer
Domain: Night and Darkness
Rank: King
Legions: Commands 80 legions of the most impure and powerful demons of darkness
From the Dead Sea Scrolls: "But by corruption you made Belial, an angel of hostility. All his domains di lui are in darkness, and his purpose di lui is to bring evil and guilt. All the spirits that are associated with him are angels , but of destruction. "
Dates: February 24-29
Planet: Uranus
Color: Blue
Element: Fire
Metal: Gold
Weapon: Katana Okazaki
Lineage of Talent: Summoning Infernal Families

Belial is a master in fast and lethal combat, his katana will deliver lightning fast blows and the use of this demon is highly recommended against multitudes of enemies not too powerful, its speed and the incredible range of moves make it relatively easy to eviscerate hordes of enemies.

Under certain conditions Belial can summon several familiars to fight at your side, such as flocks of crows that will hurl themselves on your target.

When someone commands 80 legions, you know he is badass

Tons of lore. Loving it.