Hello and welcome to the 84th installment to the Battle for Dune blogs! This week's blog talks about the game's vehicles, new Saboteur weapon and some internal build stuff.

Hey and welcome to yet another Battle for Dune blog!

This is a subject that has hardly been touched in blogs so I thought we should at least brush upon basics of our vehicles.

Atreides
The Atreides vehicles are very well armoured vehicles due to a lot of money being spent on them to ensure an Atreides soldier life will last as long as it can. They have two main vehicle walkers which are slow but hard hitting, and they have the only vehicle repair unit in the game.

The Harkonnen have very industrial vehicles that are fairly cheaply mass produced to make sure there are tons on the battle field. Not built very well but still strong, these vehicles have a fair amount of armour but are powerful and are faster than most. They also focus a lot more on fast hit and run vehicle such as melee and missile tanks.

The Ordos don't see the profit in constantly pumping out new vehicles so they have invested in health regenerating vehicles that can heal themselves on the battlefield, but the worse the condition of the vehicle the worse it's performance so make sure you are always at your best. All but two of the Ordos's vehicles are hover tanks and are great for on the move strikes, remember to keep on moving!

Now the Saboteur was our first infantry and we have only just recently started to setup his weapon ingame, his demo charge. Think of this guy as a human demo truck but not as deadly, Saboteurs run up to a unit or building and blow their charges killing them and everything around them.

LR01 has modelled up his demo trigger, check it out!

LR01 and I have been working on the settings and such for the game and trying new things with infantry settings and vehicles, as you can imagen nothing much to show apart from the odd funny picture of something not sized right but other than that we have made some great progress and slowly moving towards that release.

Here are some shots. 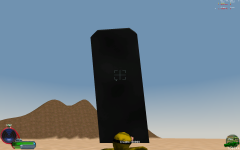 Well that's it for another one, please come and visit us on our forums at www.battlefordune.co.uk