Blog 174 has been posted on the forums and it includes the Guardian GI IFV, notes on the staff meeting and the Soviet War Miner in-game!

dtrngd has been working on the Guardin GI's IFV turret. When you purchase a Guardian GI and use him with an IFV, it makes for a powerful anti-tank and anti-air weapon. Adjustments will be made to the turret to allow the barrels to pivot up and down for good anti-air capabilities.

Take a look at the new turret, sitting to the left of the normal rocket IFV! 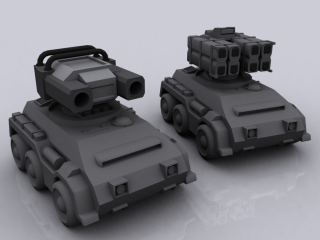 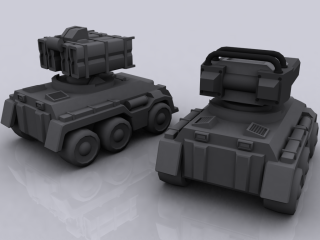 We had a meeting 10 days ago to discuss what everyone was doing. We've had these conferences before, but these are now taking a more structured form. We sorted some key issues out regarding what you can find below.

dtrngd has gotten the Soviet War Miner ingame now. This vehicle is the soviet's harvesting unit. Before we had it ingame as a prop to test the textures, but now it is rigged and drivable! The finished version will even have animations for mining ore and dumping it off at the refinery. This is a pretty big unit, so it has been scaled up to be bigger than the Rhino Tank. dtrngd is now working on getting the Chrono Miner ready for unwrapping.

Take a look at the screenie below for a peek at what will be ingame. 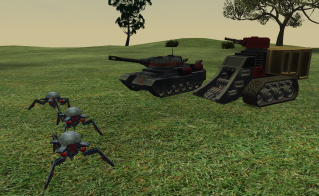 The texture will probably change a bit before release.

For the full version of this blog click here, for the main forums and much more, click here.

its far too soon for that

i do belive i am agreeing whit the people saying "WANT" and such things.