Kibera is one of the largest slums in Africa with estimates of anywhere from 200,000-700,000 people crammed in less than a two square kilometre radius. It's also the site for the Block by Block pilot project.

Touchdown in Nairobi, Kenya. It's my first time in Africa and to say the least I am quite nervous. As a sheltered 25 year old from an upper middle class family the thought of visiting the slums of Kibera was a bit daunting. I prepared myself mentally for seeing people in terrible distress and sadness. News stories of African babies fighting to survive flashed through my head as we drove to the slum with our liaison for UN Habitat.

Kibera is one of the largest slums in Africa with estimates of anywhere from 200,000-700,000 people crammed in less than a two square kilometre radius. It's also the site for the Block by Block pilot project. The people in the area have a sports field and public grounds in need of a revival. The idea is to use Minecraft to help the community visualize the changes for the area. Instead of looking at a 2D architectural drawing which can be hard for people to visualize they will be able to move within the game and get a feel for what it would be like there when things are changed. It also allows youth, a usually unheard portion of the community, give their input.

Standing in Kibera. Lack of makeup and general tiredness as a result from the trip. 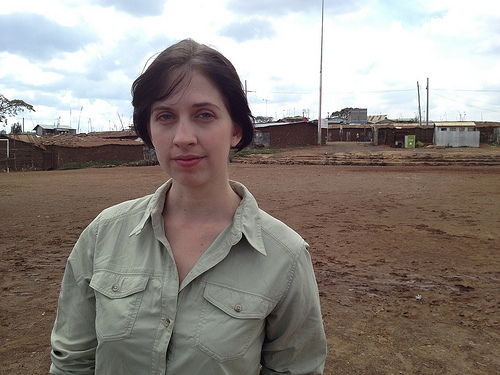 I'd seen the area already within the game. I felt ready. Scared and nervous, but ready. We arrived, waited for our security guards (a necessary precaution), and then started walking towards the middle of Kibera. Then something happened for which I was entirely unprepared. Yes, there were children playing in unsanitary conditions. Yes, I never felt completely safe. Yes, I knew many people there had difficult lives and had experiences beyond what I could ever comprehend. But what I wasn't prepared for was the hope.

I walked by two little girls hula hooping, something my younger sister and I had done many times together as children. Laughing and smiling, the girls swung their bodies to keep the hula hoops off the ground, hoops made of wire. Wires had been twisted together to form the toys these two small girls used. And there it was… ingenuity. Ingenuity became the theme of everything I saw from that point on. The people were inventive, creative, resourceful, far beyond what I consider myself to be. They use everything they possibly can. Coming from the wastefulness of the United States it was incredible to see how even scraps were repurposed. Could I make a working hula hoop? Probably not. I've been trained in a consumerist culture. Buy. Don't make. On my walk through the slums of Kibera my perception was quickly changed.

Stopping to look at one of the shops along the railroad track in Kibera. 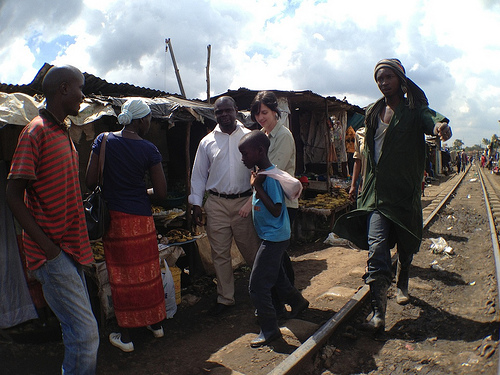 Instantly, the Block by Block project became more real to me. Not only because I was able to stand in the exact area I had seen within Minecraft, but because I saw our purpose. Not to come in and change something to our own accord, but to empower an already incredibly community to have their visions for the area realized.

Buy a Skin Pack. It will help create a public space somewhere around the world using Minecraft through the proceeds raised.

Public space in real life and recreated in Minecraft.

[Block by Block aims to involve youth in the planning process in urban areas by giving them the opportunity to show planners and decision makers how they would like to see their cities in the future. Minecraft has turned out to be the perfect tool to facilitate this process. The three-year partnership will support UN-Habitat to upgrade 300 public spaces by 2016.]

Umm... it looks like an empty field to me?

ikr? How does an empty "playground" help the people? This is NOT the way to do it..

Minecraft is the perfect tool for this. Good luck to you all.

It's not the right thing to do. The perfect tool is education and letting the people of Nairobi do things themselves, so that they can be independent and not count on useless foreign help of this type.

Who says that they aren't getting that as well. The goal of Block By Block is to allow children to get involved with helping make their community better. That's all.

I don't think you get the whole idea of this project. No, it's not to solve the Africa problem and perhaps they don't manage to realise anything than to create a little more awareness... isn't that enough?

That's the most ridiculous thing I've heared since quite a while.

Kenya isn't the only place that looks like this. This looks like a area about 5 minutes drive from where I live. She's also only seeing one side of the situation. But I've ranted enough about these things.

"[Block by Block aims to involve youth in the planning process in urban areas by giving them the opportunity to show planners and decision makers how they would like to see their cities in the future. Minecraft has turned out to be the perfect tool to facilitate this process. The three-year partnership will support UN-Habitat to upgrade 300 public spaces by 2016.]"

You are correct, this does not help them.

but, it does start the conversation between the developers and the people, which is the goal.