iSDGE finally got a blender exporter which makes creating models for it with blender as easy as it can be. 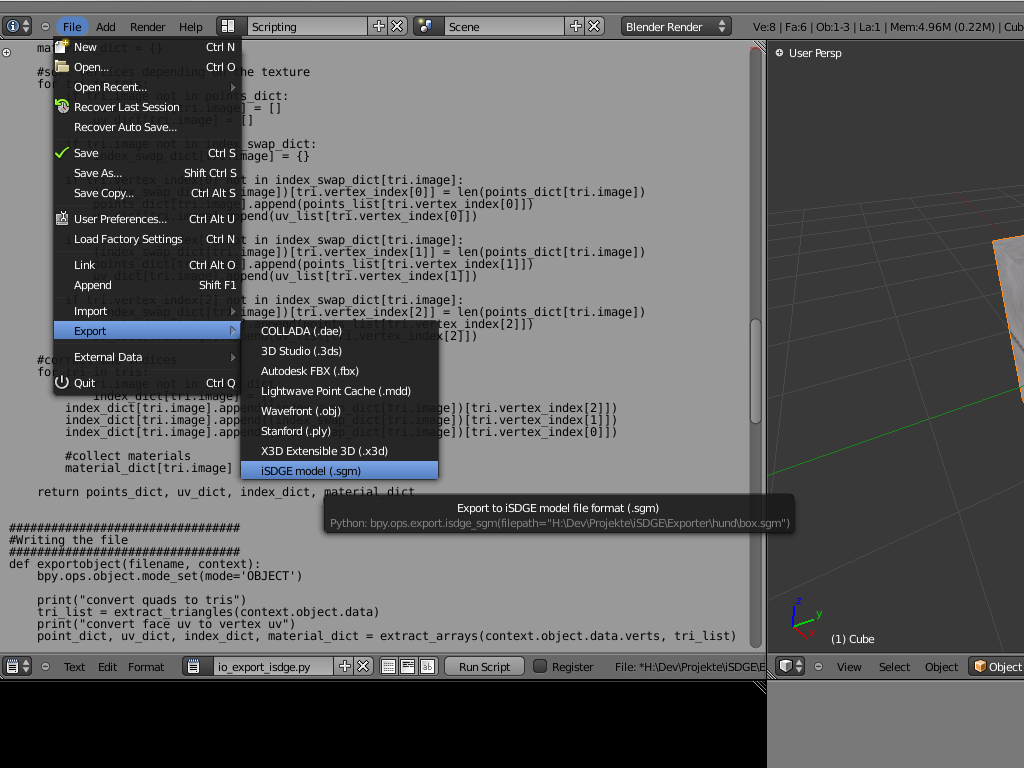 iSDGE uses a custom format for models, which helps me to load them fast and it keeps the loading code as clean as possible without the need to mess around with unneeded data and restructuring the needed one to fit the engine.

For this, I initially wrote a command line tool, which used assimp to load several different file types and was then able to save them in my custom format. This converter works very well, but the supported formats are mostly crap with animations. Especially the try to export an animated model from blender and converting it to iSDGEs sgm file format completely failed.
Because of that I first tried to write another converter based on the FBX SDK, but that turned out to be extremely complex and its collada support was also not working correctly.

The solution I was left with was to write an exporter script for blender. It is probably the most direct approach, but unhappily I never used Python before and blenders script API was just restructured a lot, which means that there isn´t much help available yet. However, thanks to the already existing exporters and some thinking I finally managed to export a complete model, supporting several textures per mesh. It doesn´t support animations yet, but those are next. Another advantage is of course, that it works on all platforms supported by blender and not just on Mac OSX (even though, I managed to compile my previous converter for windows as well).
As soon as that works as well, I just have to make the engine to be able to actually play those animations :P
I already commited the working exporter script to the SVN repository.

Now I am thinking about completely dropping the old converter, on the other hand it is going to work fine, as long as I don´t change the model format and even than it should be easy to adapt. So I will probably support both now. But fbx will be dropped completely.