In this update you can find informations about Drives


Drive is a portable medium which contains set of actions, installed on neurochip. Neurochip is attached to the spinal just below the point, where cerebellum tunrs into the spinal cord. The neurochips have to be installed right after the inhabitant is born, so they can be registred into system.
The Drive obtain only those, who apply for University. Application is not restricted by age, beacause the Maximum Overload level has to be at least 45 and it can be trained. But even at this age only 49 percent fo population reaches needed Maximum Overload level, before their death.

There are three basic colors of drives Red, Green and Blue. Each color has its own specifics. Red Drive has the most actions of all three basic colors, that's why the owners of this one are usually very creative. Actions of Green Drive emits the least Overload*, this type of drive is mostly used by workers in factories. Actions of Blue Drive are the most poweful, so the owners of Blue Drive form the security forces.

The most rarest is White Drive, which ocurres only in 0.5% of population. The White drive is combination of all three basic colors and unlike non-basic colored drives it doesn't inherit any of Demi-colored drive weaknesses.
The color of drive is not inherited from parents. 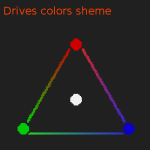 * will be explained in game (probably)