Design principles, thoughts on pixel art, and our approach to crafting immersive visuals on a shoestring!

When we started working on BIT RAT, we knew that there were limitations to how much complexity we could introduce into the game, both on account of our relative newness to the process, and because we're just two people working with cobbled-together time and resources.

The decision to go with low-res pixel art emerged partly out of this compromise, partly because we grew up on Atari and NES and will forever idealize the crumbling temple of our youth, and partly because we hope our story and characters will resonate regardless of how much tech we (fail to) master along the way. That said, we're working hard to channel the claustrophobia of a high-tech labyrinth on lockdown, with glimpses into the lives of the creatures that inhabit the margins of so much power and paranoia.

Most of BIT RAT's action takes place inside the puzzle grid, a network of corridors that can range from a single row of three or four to thirty-plus rooms in the upper levels. Each piece of the puzzle contains essential information about how to complete it -- data pathways, power connections, and other tech of interest to our AI.

Within a low-res workspace, this presents interesting challenges re: how to convey useful data AND make stuff look rad AND cram it all onscreen simultaneously without inducing vomiting or a permanent squint on the face of everyone who tries to play. Not to mention, every room in BIT RAT has powered and un-powered states, which have to look good on their own and side-by-side...gah!

Our solutions thus far have been borne of a huge amount of trial and error, but we're feeling pretty psyched about our progress. Through careful layout and exclusive palettes, we've worked to separate backgrounds, the game world, and the puzzle-scape into distinct (but complementary) visual layers.

Now, we can start with this...

add our key puzzle elements (inactive data paths, power pathways between rooms, a generator to supply power, an origin server for the AI)...

then run our puzzle (activating lighting, particle effects, and animation)...

all without losing the visual impact of each layer! We'll be continuing to tweak as many of these elements as we can throughout development, both to accommodate new features and in response to player feedback!

As much as we can push the limit of BIT RAT's gridded environments, there are some compositional limitations involved when all of your rooms are little boxes of the same size and shape. Luckily, the howling black void surrounding each puzzle supplies us with a canvas for more experimental world-building.

In our backgrounds, we're able to flesh out subtle details of the corporation's physical and psychological spaces: dusty labs heaped with the junk of abandoned projects; byzantine server rooms; even highly-classified surgical facilities. The only real limit is making sure we don't crowd out the game!

Below are a couple of our recent efforts, complete with newly styled meta-glow:

Somewhere in the depths... 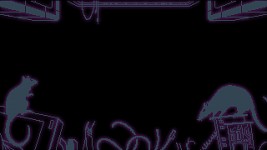 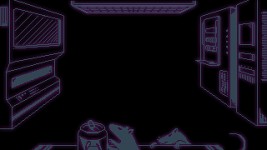 We're also working on some cool parallax and lighting effects to accentuate the intense foreshortening in the images and add depth to the world beyond/behind the puzzle grid:

As always, everything's very much in process, but we feel like we've solidified some of the aesthetic components that drew us to BIT RAT in the first place, and we're excited about getting your input on what works, what doesn't, and what's missing!

Thanks for following our progress, and stay tuned for another update next week, where we'll give a bit more insight into our AI's story and the origins of project MINOS!