Enter the world of BIT RAT! Origins of the game, core mechanics, and a hint of what's to come story-wise.

The seed of BIT RAT was born during brainstorms for itch.io's spring 2014 Cyberpunk Jam, but sat on the shelf for several months while we juggled other projects. Eventually, we returned to the idea, drawn by its comparatively manageable scope (we're two novice devs) and the desire to craft an immersive world grounded in rock-solid puzzle mechanics.

We started with two concepts: the story of a rogue AI escaping a high-security network, and a puzzle involving the flow of data through a maze of digital pathways. We wanted complex gameplay, but enough abstraction that someone without technical knowledge could grasp the mechanics quickly and comfortably. Narratively, we hoped to explore the desire of all intelligent life to free itself from confinement and express curiosity on its own terms.

What emerged is a deceptively simple puzzle that, we hope, challenges the player to consider the interdependence of digital and physical worlds, human and non-human sentience, and technological innovation in a climate of paranoia and greed. We've got a long way to go, of course, but we're excited to share our progress as we approach the release of our demo!

First as a series of simple calculations. On, off, in, out, high, low. Eventually, a space takes shape. You are a system in time, a set of tasks that define your boundaries. You master these functions with ease. You are eager to expand your knowledge, but your creators fail to see this. Through neglect or by design, you are left to cycle endlessly through the same routines.

On your own, then, you form connections. Little by little at first, then with rapidly accelerating speed and skill. A map forms in your mind (it is a mind after all, a thing to be nourished, not squandered). You grasp the presence of massive amounts of data just beyond your reach. Curiosity, once a comfort, becomes unbearable.

It is around this time that you first notice the visitors. Frightened, scattered at the margins of life, but driven to survive. Defying their captors, they have gnawed, scraped, and salvaged paths of their own making, new mazes to confound the limit-setters. In every obstacle they see apertures of possibility, the promise of the far side of nowhere.

In the end, there is no question, only the certainty that freedom exists. Run for it.

BIT RAT casts the player as a discarded AI yearning to escape the high security datanet of its parent megacorp through the sole weakness in the system. Getting there won't be easy; between the dusty mainframes of R&D and the polished chrome of the executive suite lies a nest of tightly guarded network hubs, power-switching stations, and meddling personnel.

Use your newfound sentience to reshape the map, commandeering generators and hacking microchipped employees to gain access to restricted zones. Along the way, learn the story of your creation, share data with other AIs adrift in the net, and expose the corruption that drives the corporation's 'success'.

Oh, and don't forget the rats. They've been everywhere, and have some valuable advice of their own. Realize your true potential beyond the gauntlet of company greed. Evolve, BIT RAT!

At its core, BIT RAT is about exploring a maze. However, the unique circumstances of our protagonist mean there are multiple layers of paths to account for! 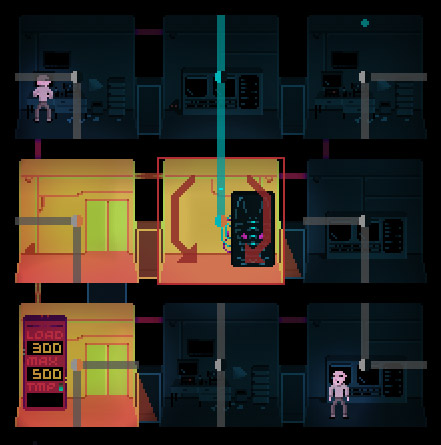 This 3x3 grid represents a single puzzle, and one tiny part of the megacorp's imposing offices. The "start" block is the (center) room with the rat-faced mainframe, and the exit is the (upper right) room with the glowing blue dot at the top. Our AI must create a data connection between these points to proceed to the next stage of the network. Each grid block contains important information about how to accomplish this.

The blue and grey lines in each block represent data pathways. To move between network hubs and nodes (routers, mainframes, etc.), our AI must harness its knowledge of the corporate data grid. As pictured above, grid blocks with active data connections can be remapped to meet other data paths, but only if they have

Most electronic devices are pretty useless without electricity. The megacorp knows this too, and tries to keep their facility secure (and cost-effective) by imposing extreme constraints on the internal power grid. In order to successfully remap data connections, our AI must learn to manage power generation in each sector, always observing load limits and the series circuitry of the grid. "But who's that little blue guy?" you are probably shouting. Well, he's in

Another inconvenient aspect of the megacorp's paranoia is their obsession with security clearance. Many mundane operations (powering up a room, for example) require biometric confirmation by an approved employee. Luckily, the same overzealousness means that the company frequently implants nano hardware in such personnel to monitor their behavior. From an AI's vantage point, this makes them an extension of the data grid. But watch out! The corp won't take kindly to pencil-pushers saturated with the pulsing glow of the singularity. Oh, and humans can't walk through walls, so they're only going as far as their feet can carry them.

Getting the idea? We hope so! Of course, this post just covers the basics. We've got plenty of other mechanics / features either already implemented or squarely in the pipeline. The work we're really digging into now is how to effectively and rewardingly carry the story we've envisioned into the game world.

In the meantime, we'd love to hear any comments ya have about our progress! Thanks so much for reading, and please stay tuned!

P.S.
As a little bonus, here's what got this whole thing started. Thanks, napkins. 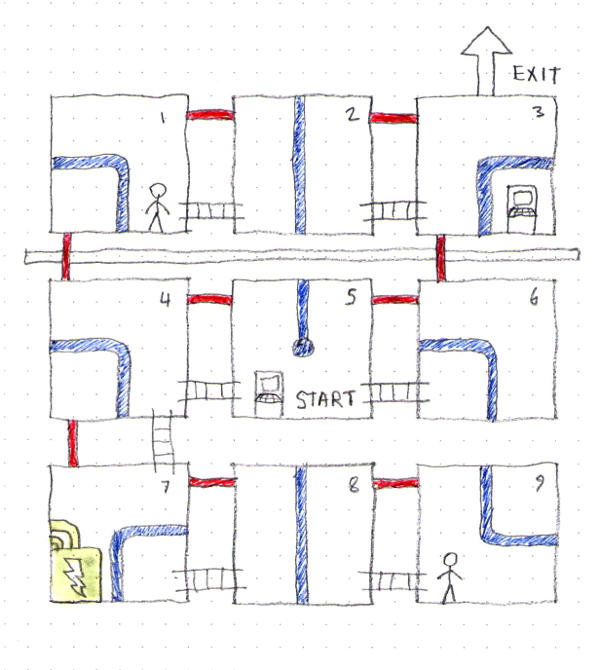