An article detailing some of the most recent changes and improvements to the Bevontule pre-alpha demo.

Greetings! It’s been awhile since we’ve posted anything and actually for good reason! For the past month or so, we have been working tirelessly to improve Bevontule, more or less from the ground up in preparation for the GDEX 2016 expo, which we attended just a few short days ago.

These changes and improvements were definitely well-received: the response and reaction from those who tried the demo was overwhelmingly positive and we were also able to gather a great deal of feedback for ways in which we could further improve upon the game as it stands. We’d like to further thank everyone that showed up and especially those who clocked in an hour or more or were repeat offenders. Awesome stuff!

For this post, I wanted to talk mostly about the types of changes we have made and a little about what our future plans are. Let’s start with the arguably most important:

In the past few months, we’ve taken a long, hard look at the graphical quality of Bevontule and realized that we needed more eye-catching and vibrant visuals. We spent a lot of time nailing down the underlying systems of the game, finally cementing them to the point where we needed the graphics to match the quality of the mechanics.

We started by upgrading our terrain tools and restarting the steppe area from scratch. While this is yet another major overhaul of an existing area, it’s come to serve as a reflection of our growing experience with Unity’s terrain and lighting systems, as well as third-party assets that help us to create more life-like and realistic water, sky and foliage systems. 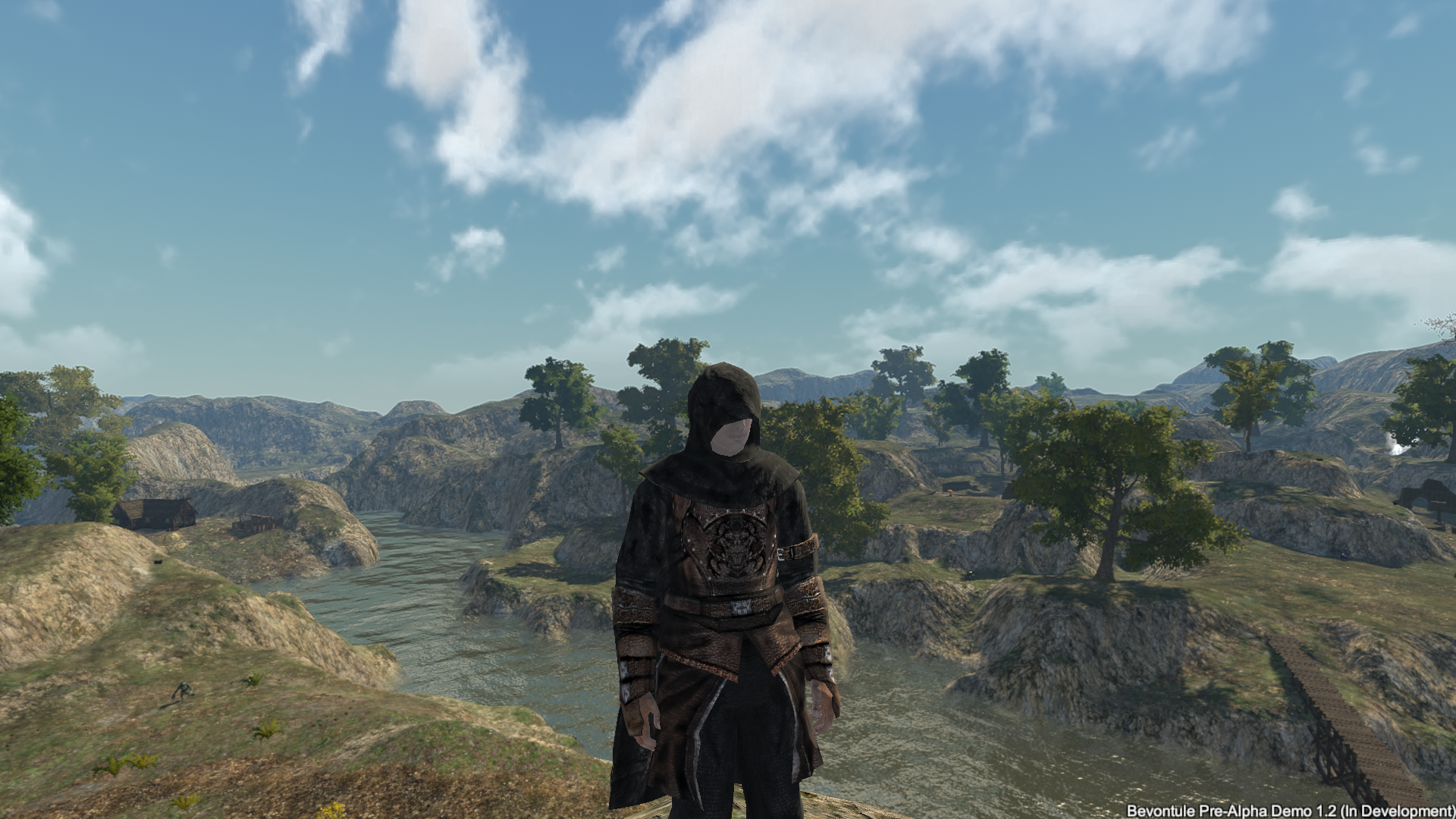 With these new tools, we were able to begin experimenting, in earnest, with all sorts of additions, including vastly improved trees, foliage, flowers, shrubs and bushes, as well as new rocks, dirt, stones, cave entrances and outcroppings. 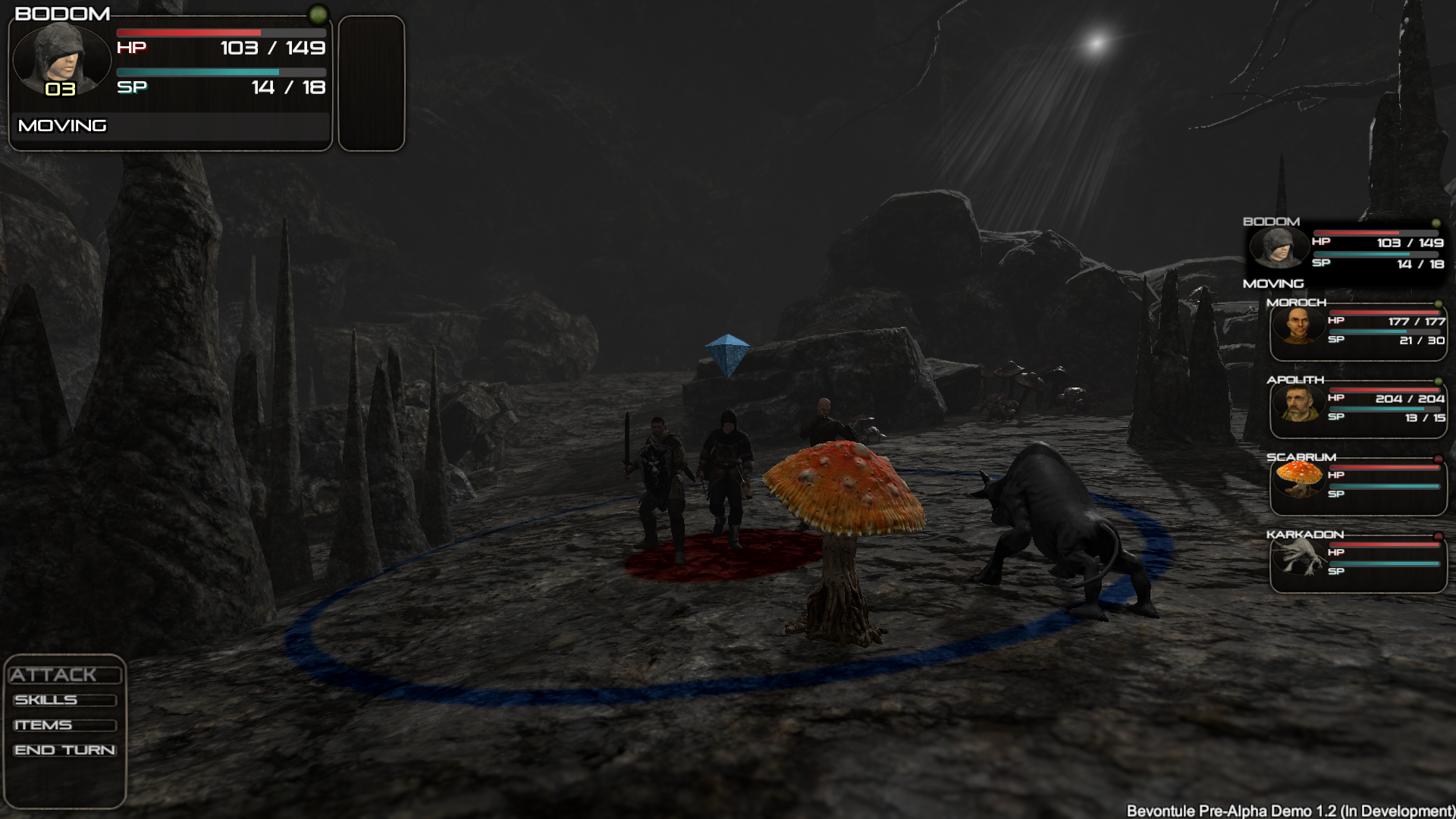 We wanted to make the steppe feel more atmospheric and vast, yet more directed and controlled. The previous 1.1 Atonian Steppe was, by contrast, barren, sprawling and utterly open, whereas this iteration feels tighter and more lived-in.

An unfortunate side effect of upgrading certain game visuals is that you raise the bar for the rest of your non-terrain related visuals. While we were satisfied with the types of enemies we had created, we knew that they also needed overhauls to match the higher quality environments. We set about replacing nearly every enemy in the game, substituting our previous models with more polished ones and in the process, new sound effects, animations and notably, new PBR textures. 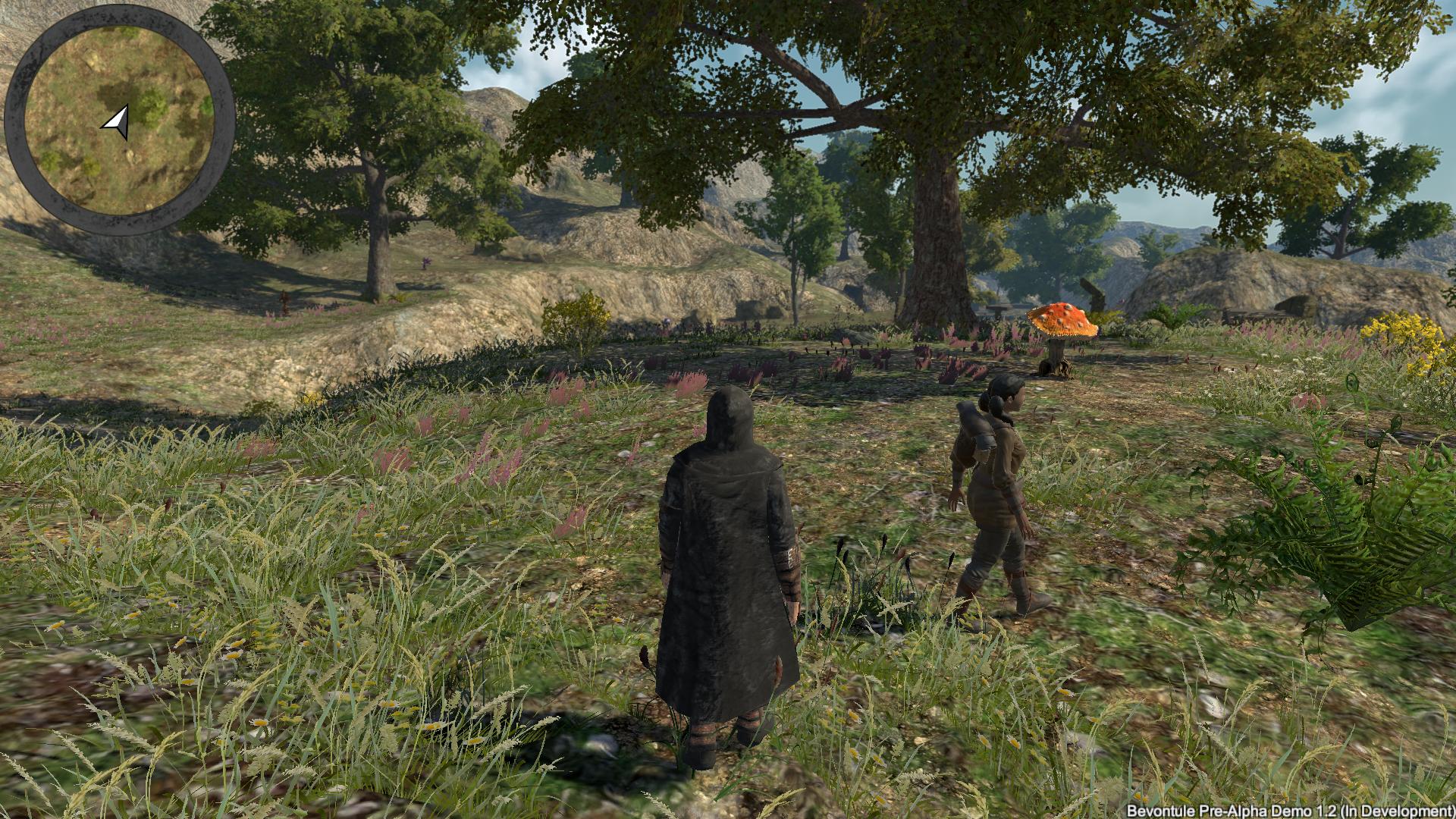 We also took aim at another aspect of our visual presentation that had been outpaced by gains elsewhere: particle effects. There is a secret to improving your particle effects and it involves a great deal of serendipity, or perhaps, a certain intuition about the ways in which parameters should behave over time. Once again, experimentation and experience both go a long way and we managed to also upgrade nearly all enemy and ally particle systems. 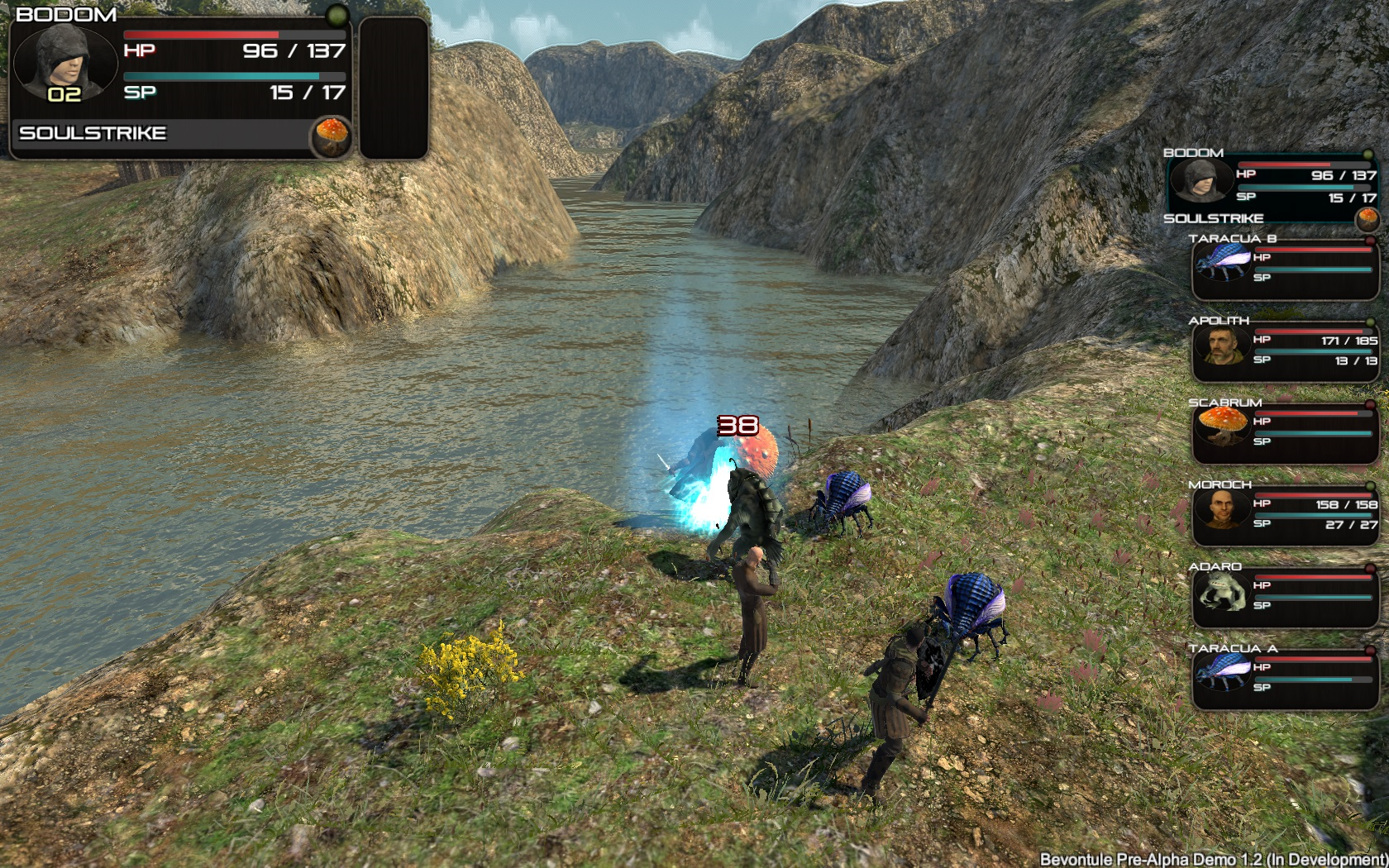 Finally, we added a few new post-processing image effects, such as depth of field, bloom, vignetting (for battle) and a few other miscellaneous effects.

Having long come to the conclusion that the battle system will never-ever be 100% complete, it felt only fitting to give it a little bit of TLC as well. We’ve made a large and quite frankly, ridiculous number of changes to the overall flow and presentation of battle, most of the changes affecting the player directly, whereas others have served to ease and quicken development: 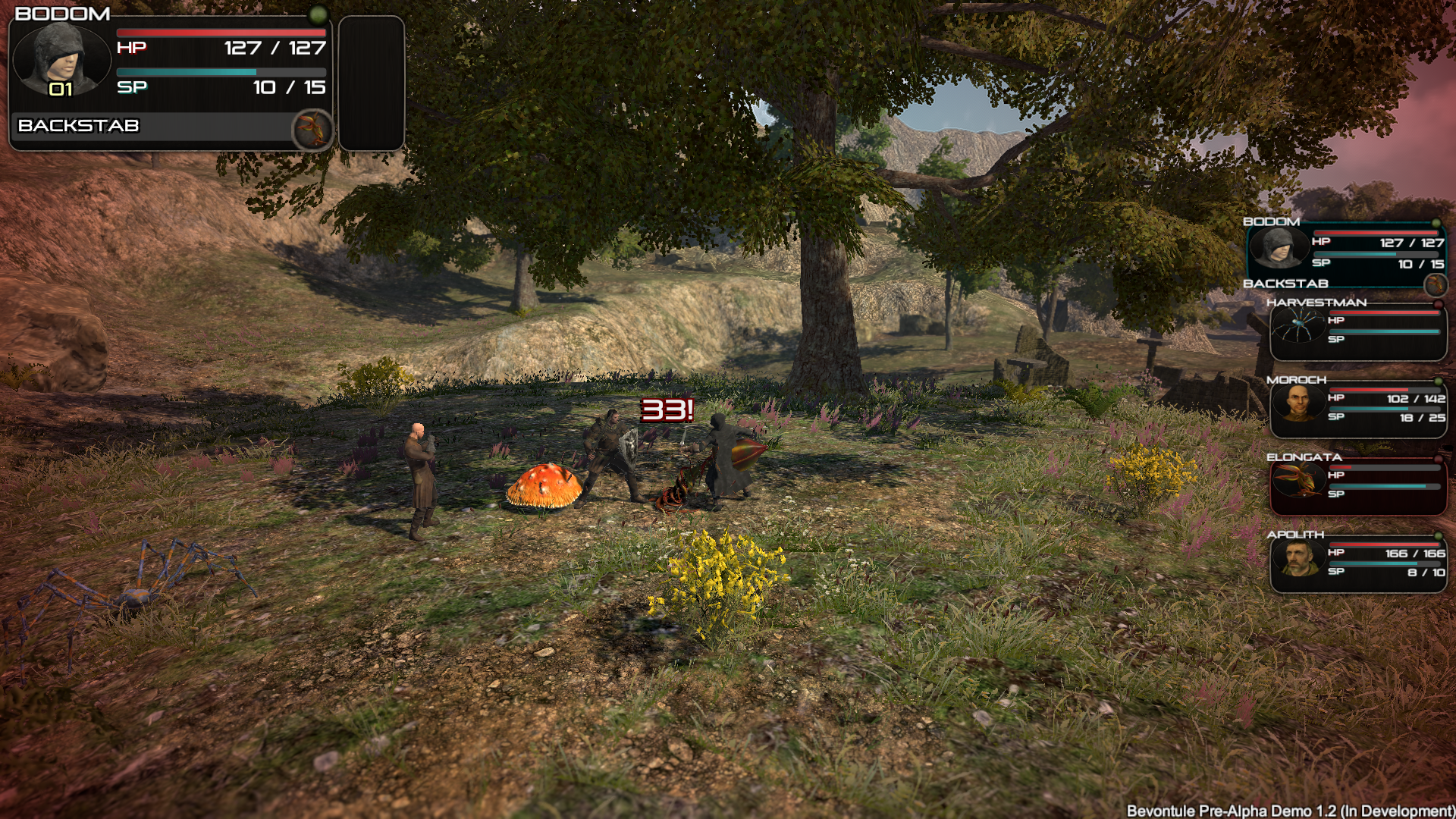 We have significantly improved our main menu interface as well, providing a more coherent, stylized, and, we think, better presentation. In previous versions, the UI did not expand beyond a certain screen resolution, something we definitely needed to later show Bestiary and Skill submenus.

Equipping items is less awkward, as we’ve moved the pertinent equipment lists closer to the actual equipment slot in question. Equipment stats and character attributes are presented in a cleaner manner and can be gleaned and understood much quicker than before. 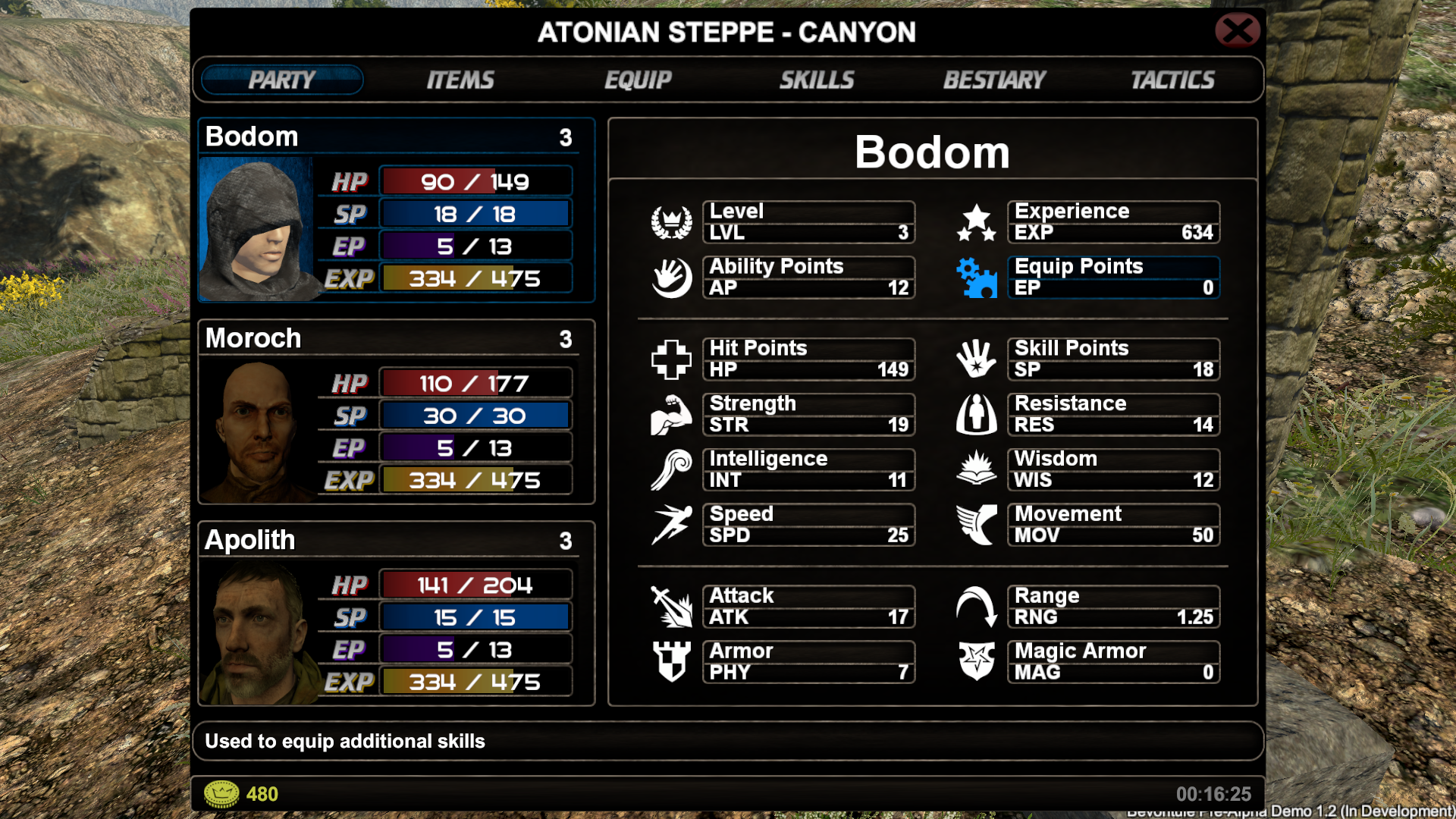 We’ve also added a few new NPCs, and also, after a bit of headache, have a semi-reliable (we’re gettin’ there!) framework for rapid prototyping of new characters and outfits. 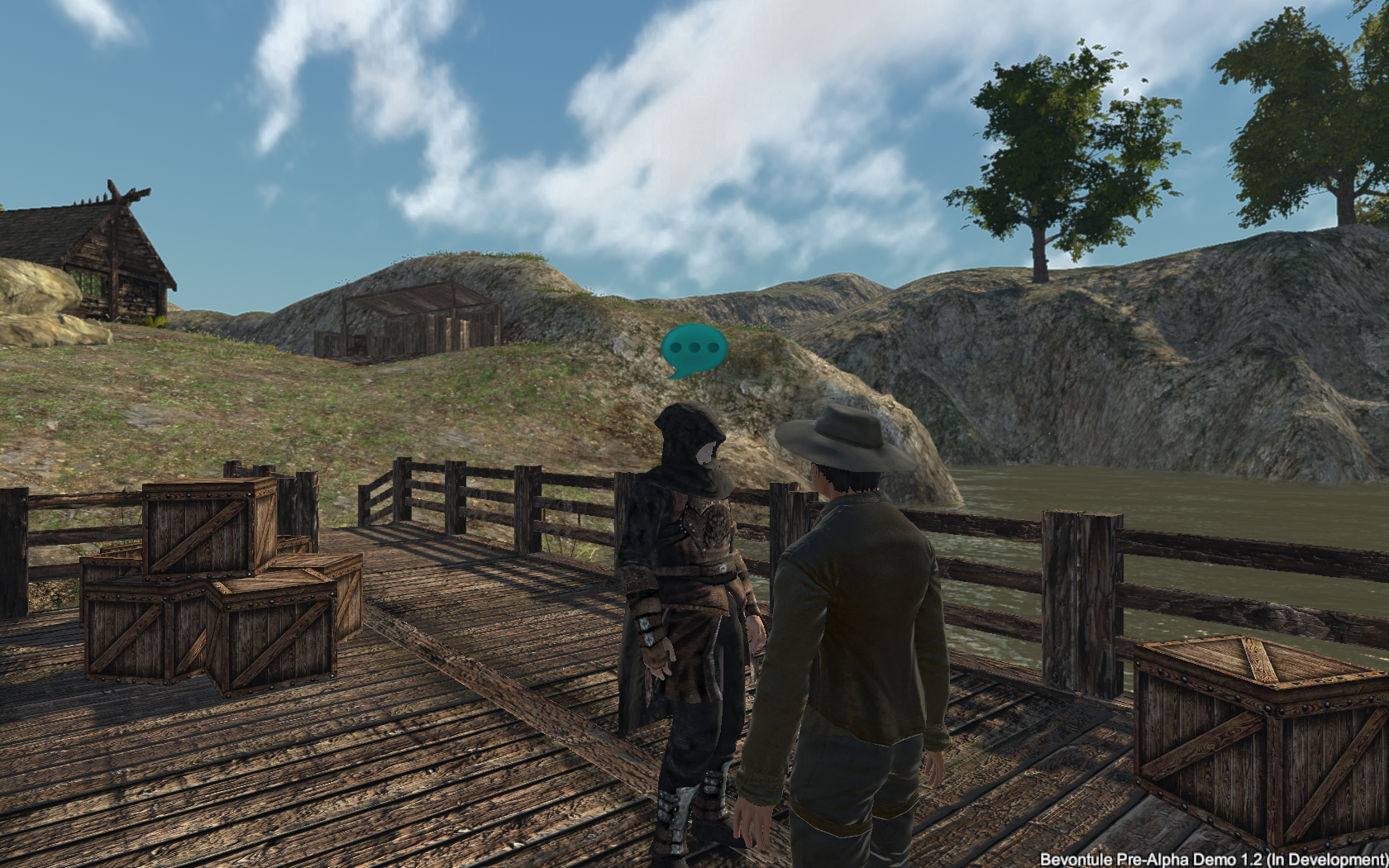 It’s also much easier to trigger interactions with objects, resource nodes and NPCs; chests can now be opened from any angle. We have continued to refine and expand upon our ‘Interaction’ system and an increasingly complex set of behaviors can be programmed into NPCs, allowing for more streamlined creation of quests, dialogue, as well as cutscenes and other events.

Enemy hiding, chasing and de-aggro’ing (is there a better word for this, haha) has been significantly improved. Enemies are no longer psychic and have more accurate vision cones and detection criteria as to afford more opportunities to avoid them if desired.

Highlight shaders, on both interactables AND enemies, have been added to the Unity standard shader and reduced in complexity. This is a great improvement as objects no longer need two materials (ughh.) 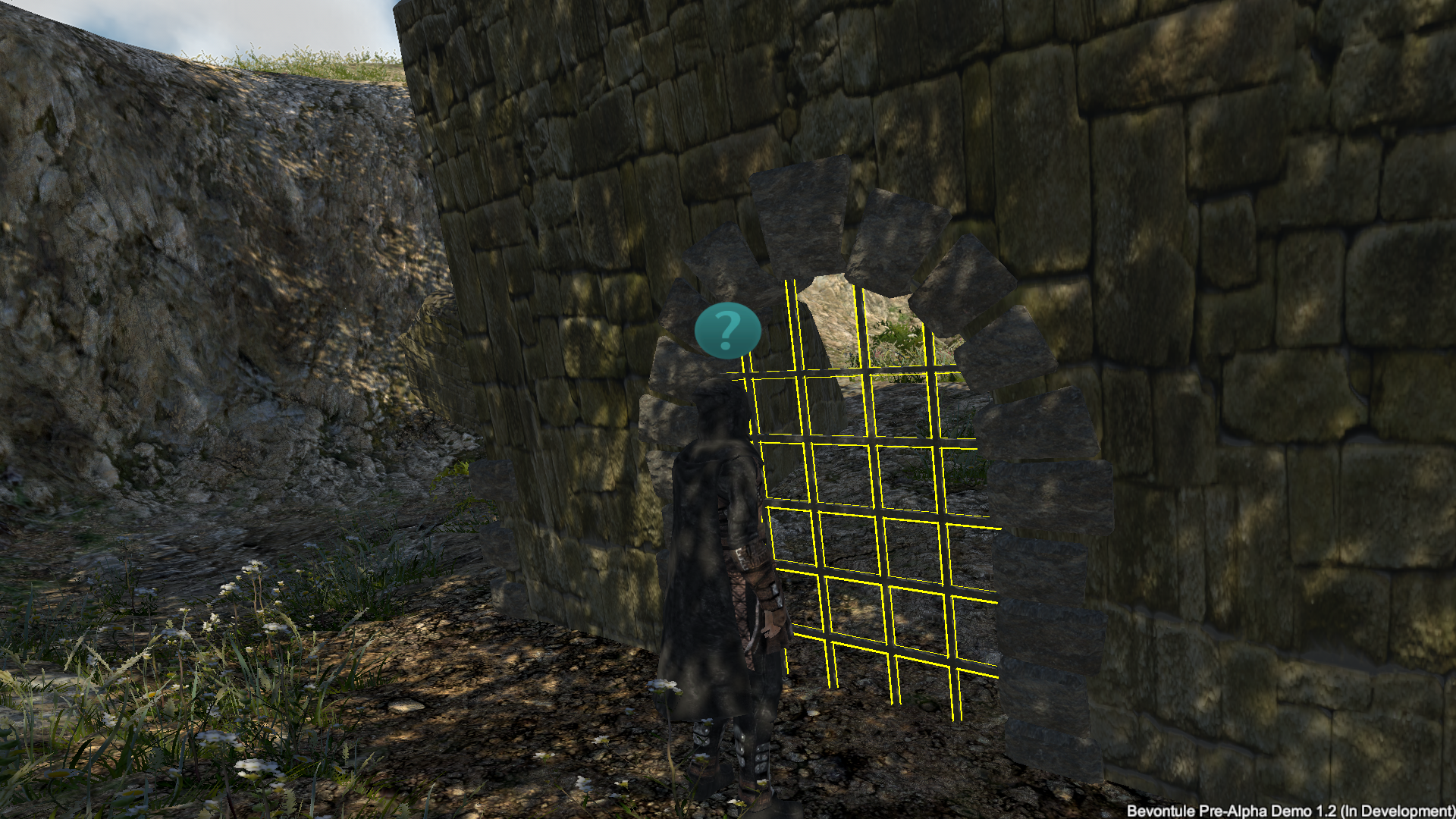 Our first order of business is to fix a few lingering issues with the current pre-alpha demo. While it ran smoothly enough at GDEX (nothing caught on fire :) there were of course a few minor inevitable issues that need fixed before a primetime release. Thanks to everyone who caught any of these bugs for us!

We anticipate that the 1.2 demo will be released in the next few weeks after we’ve iron out those small issues. Time permitting, we’ll try to add a few things as well:

Long-term, we have three large features yet to implement. While we’ve discussed at a high-level how the skills system will work, we haven’t touched the Crafting or Bestiary systems, which are quite unique in their own ways and we’re extremely excited to begin work on those and discuss them as well in future devblog posts!

I guess that just about covers it! Thanks for reading and supporting Bevontule and like always, feel free to leave any comments, suggestions, critiques or haikus (5-7-5) in the comments section!