Post news RSS Behind the scenes - The Main Theme

The making of In Verbis Virtus “Main Theme” soundtrack! 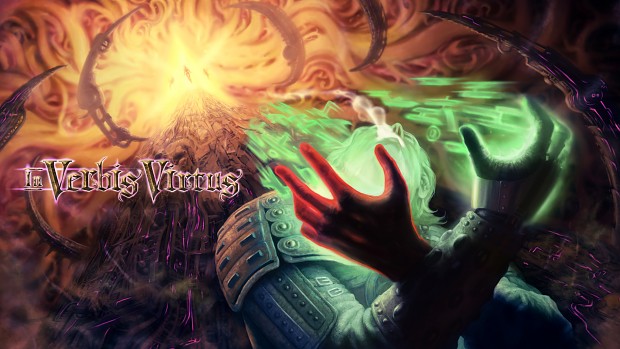 You can listen to the theme here

Short after the first demo came out, we realized we needed a trailer to showcase the innovative game mechanics and fabulous graphics, without relying on people downloading the demo without knowing the game.

As a composer, I tried to push the composition of the Main Theme as far as possible not because of laziness, but to have the biggest possible understanding of the game aesthetics – the music should ideally cover them all in a balanced form.
But since the trailer required a strong music to go with, I decided the time for In Verbis Virtus to have a Main Theme was arrived.

Talking with the rest of the team I gathered the artistic elements developed so far:
- fantasy setting
- the player will face mysterious treats with is wit as much as with its magical powers

For the beginning of the piece I let the main menu inspire me. I figured this bird’s eye view (Alfier and me had the same idea, since this is also how the trailer begins) and painted a suspended musical texture with three interleaved ostinatos – flutes, second violins and violas respectively. I then brought in a variation of the main theme with the cellos, where the second half comes first and vice-versa. This way its melodic movement conveyed a sense of mystery that was a better fit in this point of the music. 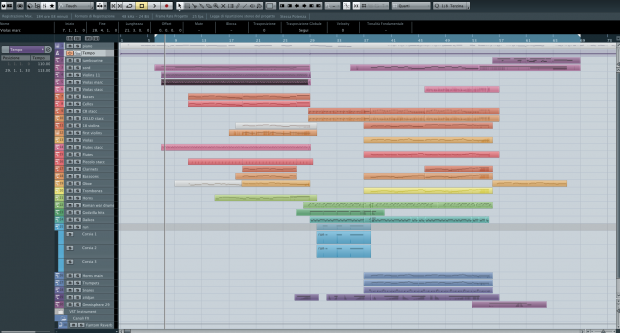 The complete arrangement of the main theme in Cubase

Later, the introduction of drums and cellos and basses staccatos served as introduction to the statement of the main theme in the next bars. From there, the piece just flows naturally to the aforementioned “arabic” ending.

And that’s all for now, if you have any question, feel free to ask using the comments below!

In the next post, I will present you the brand-new battle track, along the purposedly developed combat music engine. Stay tuned!