France 1940 is coming to Forgotten Hope 2, and we start off on the path to this next major release with the most feared of the French tanks, the Char B1 bis

Today we have a bit of a special Bastille Day update for you. As many of you are no doubt aware, we have been working away on our next front to feature in the mod. This front is, of course: France 1940.

This has been a long term effort from us, and we have been very pleased to finally have the opportunity to focus our attentions onto it. You might remember that there are a couple of French vehicles that have been in the mod since 2.5, all be it in German colours, however now we are happy to show off a render of a true French icon: the Char B1 bis. 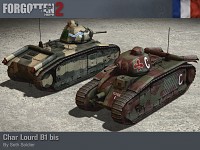 The Char B1 began life in 1919, with a memorandum written by General Estienne that presented concepts for mechanised warfare based on experience from the Great War. One such concept was for a Char de bataille that could fight its way through heavy fortifications in the support of infantry. In 1921 the first request was tendered for such a vehicle: more of a self propelled gun than a tank, with a fixed howitzer and small defensive machinegun turret. Four designs were submitted for trials, and while they all suffered from poor reliability, the second design from Renault and Schneider was chosen as the basis for further work.

The design eventually matured into the B1, armed with a 75mm howitzer in the hull, a low velocity 47mm gun in the APX1 turret with 2 7.5mm reibel machineguns. Armour was 40mm, and there were 4 crew: a driver who also aimed and fired the main gun, a loader, the commander (who stood alone in the turret), and a radio operator. The B1 bis followed very quickly and was the main production variant, with the armour increased to 60mm and the turret swapped for the APX4 with a longer 47mm antitank gun.

To help the driver aim the hull mounted howitzer, the B1 bis used a complicated hydraulic differential steering system. This Naëder system allowed for extremely precise turns but was dependant on one particular type of castor oil and would seize up if the wrong oil was added. The tank was clearly a product of the First World War, and due to its extended development time was entering service effectively obsolete in the face of modern tactics.

The B1 bis was a formidable opponent to the Germans, who's tanks and antitank guns were essentially useless against it at anything further than a stone's throw. However the B1 bis was hampered by their short operational range and by the general inferiority of French doctrine against the German's more manoeuvrable forces. A total of 34 B1 and 369 B1 bis were produced from 1935 through to 1940, and many of these would be captured and reused by the Germans. Our was made by Seth Soldier.