Finally the time has come: As announced, the Battlegroup42 team today releases version 1.6 of our modification for Battlefield 1942. We have been working on this version since November 2008 and the result is the most extensive and highest quality update of our mod so far, which by the way is getting 7 years old this year. 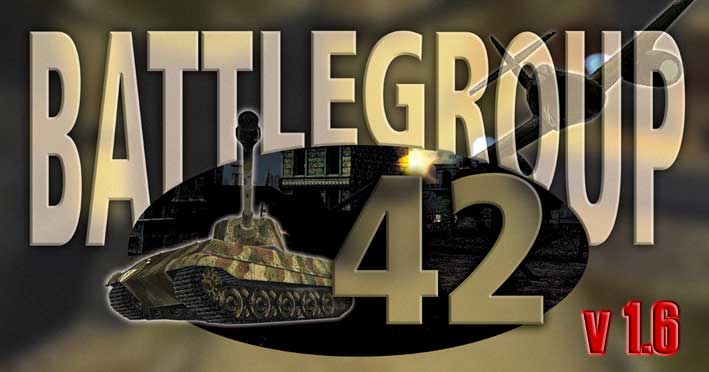 The facts speak for themselves: 13 new maps are waiting to be discovered by you, containing a lot of new toys. We have 55 new vehicles,ships, planes and stationary weapons to offer. Most of them are replacing older models from the early days of the mod or models from the original game, but there are also a lot of completely new ones. Four new naval vessels, the Dutch armored car, the British gun tractor and the French fighter plane are only a few examples to be mentioned here. But that´s not all: There are 17 new or re-worked hand weapons and a lot of new statics. Additionally there are many improvements "under the hood" as can be seen in the change log.

There you´ll find the simple sentence "many new effects made by MasterChiefRulz" behind which there´s a small sensation. After working very long on them MCR finally gave us his new effects which we integrated into BG42 at once. So look forward to many new cool explosions and other effects, giving you a whole new visual sensation. A video was planned to give you a jaw dropping preview, but unfortunatly our video artist Scottsman got some trouble with his PC, and the video isn´t ready yet. Sorry, but this means you have to download BG42 1.6 to see all those wonders!

Last but not least we want to take a look at four of the new maps which made it into the mod last minute. The first is a map from our new mapper Afri Cola is "Uelzen" which represents the battles fought in and around this city in the Lunenburg Heath, which was attacked by British infantry and tank units in April 1945 and finally captured after several days of heavy fighting and great losses to both sides. Afri Cola made this a push map, so the control points have to be captured in the correct order. Just like in the real battle were the British had to advance street by street.

Our next new map was made by Sarge Surfat and plays at the same time, but several thousand kilometres further to the south, in the Po Valley. The Allies started a decisive offensive to break through the so called Gothic Line. During this offensive the last combat action of paratroopers in World War II took place. They were 114 Italian elite soldiers, remnants of the well known and feared Italian paratrooper divisions under British command. Dropped behind the German frontline their task was to cause confusion, hinder the German retreat, attack vehicle convoys and to keep important objects from being destroyed by the Germans.

Another several thousand kilometres away lies our next map. At the end of 1942, during Operation Torch, allied troops landed in the French colonies of Morocco and Algeria. Their goal was to relieve the threatened British Eighth Army and to cut off the Afrika Korps´ supply lines. Against the hopes of the Americans and British that the French would not show any resistance during the landings, the colonial troops of the Vichy French put up a fierce resistance in some places. When American troops tried to land in the Moroccan harbour of Safi it took them one day to take control of the harbour after heavy fighting and naval support. The map was made by Sarge Surfat.

The French are playing an important role in our next map too, but this time on the allied side. We´re talking about the famous battle of Bir Hakeim, which took place during the Gazala offensive of the Afrika Korps. Bir Hakeim was defended by the First Free French Division of General Marie Pierre Koenig, securing the flank of the British Eighth Army which was retreating to Egypt after the fall of Tobruk. The determined resistance held up German and Italian forces for 16 days, allowing the British to get into defensive positions for the first battle of El Alamein. Some of you might know this map already, it´s actually an older map which was created by zara5ustra years ago. Sarge Surfat improved and converted it for BG42.

And now we wish you a lot of fun with Battlegroup42 1.6. The MOB server is already running this new version and will run only the new maps for some days. You can download the mod from our website (check "Downloads") or the links listed at the end of this message. Check also our forums for new mirrors. Pay attention to our installation hints which you can found at the beginning of the 1.6 changelog. Here it comes:

- We strongly recommend at least 2048MB RAM and a video card with at least 256MB RAM and a CPU with at least 2 GHz
- Do not try to play online with a connection speed lower than DSL/Cable.
- Close ALL unneeded background applications which are using bandwith and/or memory, like file-sharing programs,
file managers, e-mail programs, browsers etc. Make as much RAM available as possible.
- Check your ingame graphics settings. Reduce the screen resolution if necessary.
- defrag your complete hard disk at least once a month.
- Battlegroup42 only runs with 44kHz setting, 11 and 22 kHz are no longer supported, mainly for reasons of mod size
and the fact that modern onboard sound chips can handle 44kHz without problems.
- Hint: If you own a sound card which has 64 hardware accelerated channels (like the Audigy 2 for example) you can use
the following trick to play with 64 channels (which increases the amount of sounds played at once by a factor of 2 !):

-> Open the file "Default.con" with a text editor. It can be found in "Battlefield 1942\Mods\bf1942\Settings\
Make a copy of the file BEFORE changing anything !
-> change the line "Sound.setHardwareVoiceLimit 32" to "Sound.setHardwareVoiceLimit 64"
-> save the file
-> active hardware acceleration in the Sound menu of Battlefield 1942
-> play with 64 hardware accelerated sound channels :-)

other fixes:
- added missing objects into lexiconall.dat
- re-worked loading screens for some maps

The community site Bf-games.net, a long time supporter of this mod, will offer a mirror as well. Please visit the site for more information.

fantastic keep it up u keep this game alive

Looks freaking awesome. I think I am gonna install my 1942 and play it ;)

is there a patch so you can upgrade 1.5 instead of downloading all three files???

No, Ironsights available. The team tested Ironsights in an older version or the BF:Vietnam mod can't remember anyway the players didn't like that feature => IS removed

I keep crashing to desktop when I try to connect to a server. I guess that this mod is not Vista friendly?

I don't use Vista but maybe this could help you.

If it doesn't help please register in our forum at www.battlegroup42.de there are some other users with running BG42 on Vista.

Few questions about your possible solutions. For the 1st bullet, I simply move my Battlefield 1942 folder out of C:\Program Files? And what is UAC? Sorry I am not very knowledgable in this stuff. Thanks!

Check this out before trying step 1. + 2. ;) it's a thread from the old FH Forum at Filefront.
Tinyurl.com

1.) "simply move"
You have to reinstall BF1942 because the entries in the Vista registry point at c:\program files if you simply move it that can cause internal problems. Is possible to change this registry entries per hand but without some advanced computer skills I won't do that cause you can kill your windows installation ;)

Thank you AfriCola. By making the compatibility ME and unchecking run as administrator did the trick.