A very popular thing to do in this period is to write a review of the past year, highlight the mod’s ups and downs, pros and cons, give a conclusion and talk about the future. So that’s I’m going to do. Take a journey with me (NewErr) through a recap of what happened in the last years of the mod.

The most awaited time of the year has come again, the Mod of the Year awards, here on Moddb. An event in which modders showcase their latest works, announce special news and surprise their fans with new content.

Usually this was a time of joy and hopefulness and that’s how I was remembering it, a time where I was eager to share content with the fans and discuss loads of stuff with the team and players. However this year is bitter sweet since I am working alone now, not really anyone around to share my ideas, insights and disappointments with. A handful of people seem to still stick around so at least that keeps me motivated.

I want to share some statistics since we are here, recently several things happened. First of all, we passed 800,000 page visits here, been a long way since we had the prefix changed. We also reached a reasonable number of followers on Facebook (55) which has grown pretty well recently. And last but not least, we reached ~620 followers. Of course, there are people that left 4 years ago but the fact that the number is still growing shows me there is still hope... to not play this mod alone. It’s so interesting how this community still stays strong through different mods, patches, servers.

A very popular thing to do in this period is to write a review of the past year, highlight the mod’s ups and downs, pros and cons, give a conclusion and talk about the future. So that’s what I’m going to do. (Expected something smarter, eh?) 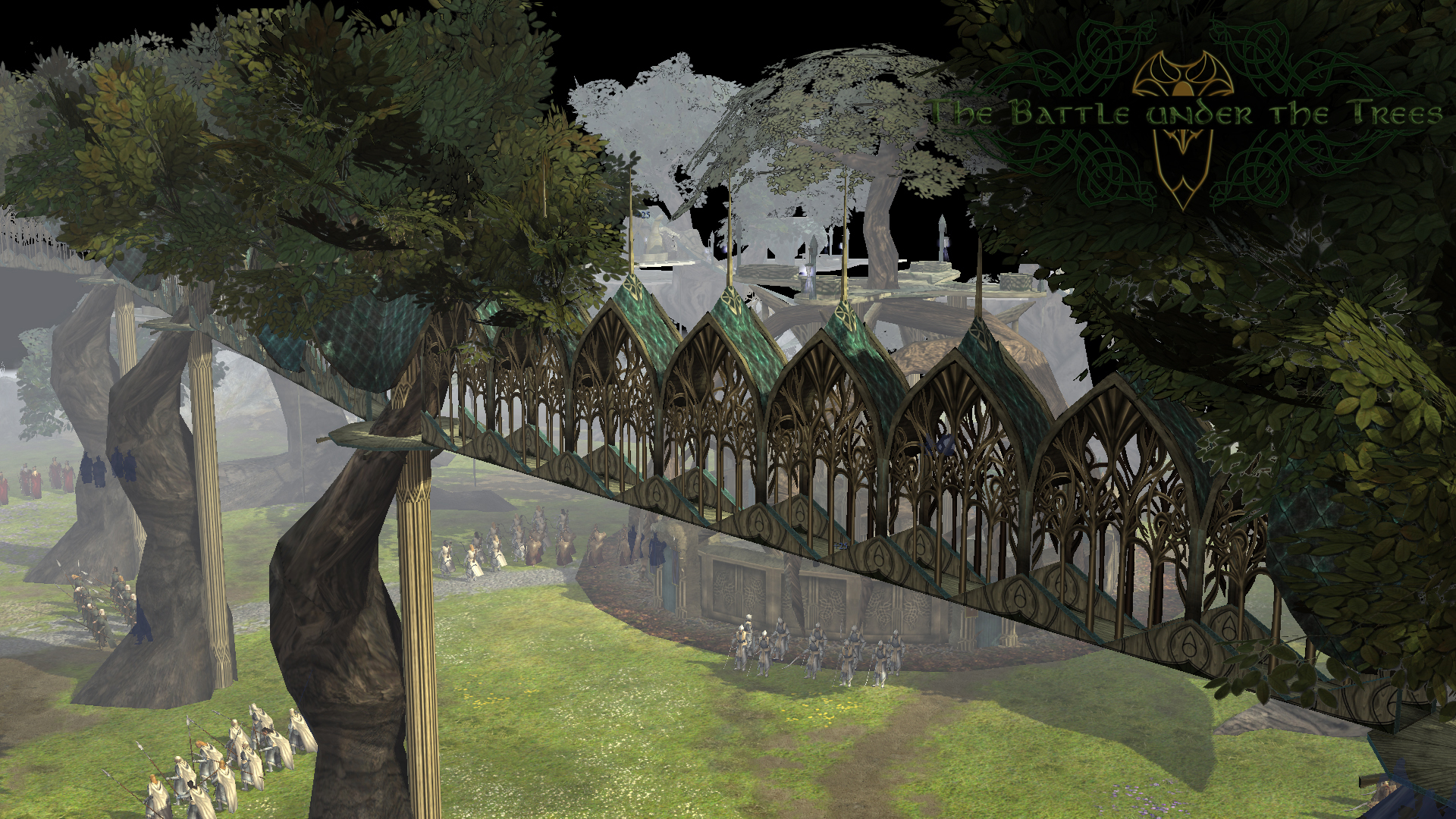 First of all, I will talk mostly about the past 2 years and not just the last. Two years ago, somewhat around this time I announced something that probably changed my modding experience more than my previous 7 years: The Battle Under The Trees. Basically Ridder Clan’s Wood Elven faction. But it was more than just that, Mirkwood was the faction that I always wanted to do and was the first faction I wanted to make when I started modding. Of course what I imagined years ago and what I imagine now are insanely different. Unfortunately 2 years have passed and they’re still not released. Sad but back then I was hyped because we managed to release a beta that year and we were still a team. So much has changed in this time. The main highlight of this is that I learned coding, something I was always afraid. Let me get this straight, I’m a programmer and I was afraid of BFME coding, YES! Those who know me it’s because of my art and that’s what I wanted to do in BFME. But times changed and so did I, to see my work on the screen I had to do this and I did. I also started investing time in other interesting projects on many fields but this evil mod with its lore will always have a place in my heart and draw me back, maybe even after I “finished” it.

Second, the actual development of the Wood Elves (except some elven units shown at the announcement) started roughly at the start of this year, after I finished my bachelor’s project. I invested a lot of time in designing the elven buildings, the faction mechanics and how to make it special and unique but at the same time grounded in the Lord of the Rings lore and Battle for Middle-Earth style. There are a few ideas that stuck from the start (like the units splitting) but that was the moment when the RC Team developing RC Mod transformed in just me. Snap! So I started coding. It was not a pleasant start but months later (now) I feel very confident in delivering what I set up. The initial design of the faction was not what you will see next release. Why? Because I decided upon a stupid idea, make the best release I ever did and do things I never done! That simply transformed the initial plan to dust and added hundreds of extra hours to the development. Snap2! I’m not even going to apologize cause it’s taking so much, you should already know this from RC Mod.

But I can say the development is doing great and I can’t wait to show you guys the result (probably/hopefully next year if no meteor hits Earth). The future of the mod will be decided more or less on the next release. But MOTY is about surprises, yes? What do you say about an actual Campaign Mission with Battle Under The Trees? Dunno, just saying.

I promised ages ago that I will present you how the Wood Elven units will work. I think it’s about time. 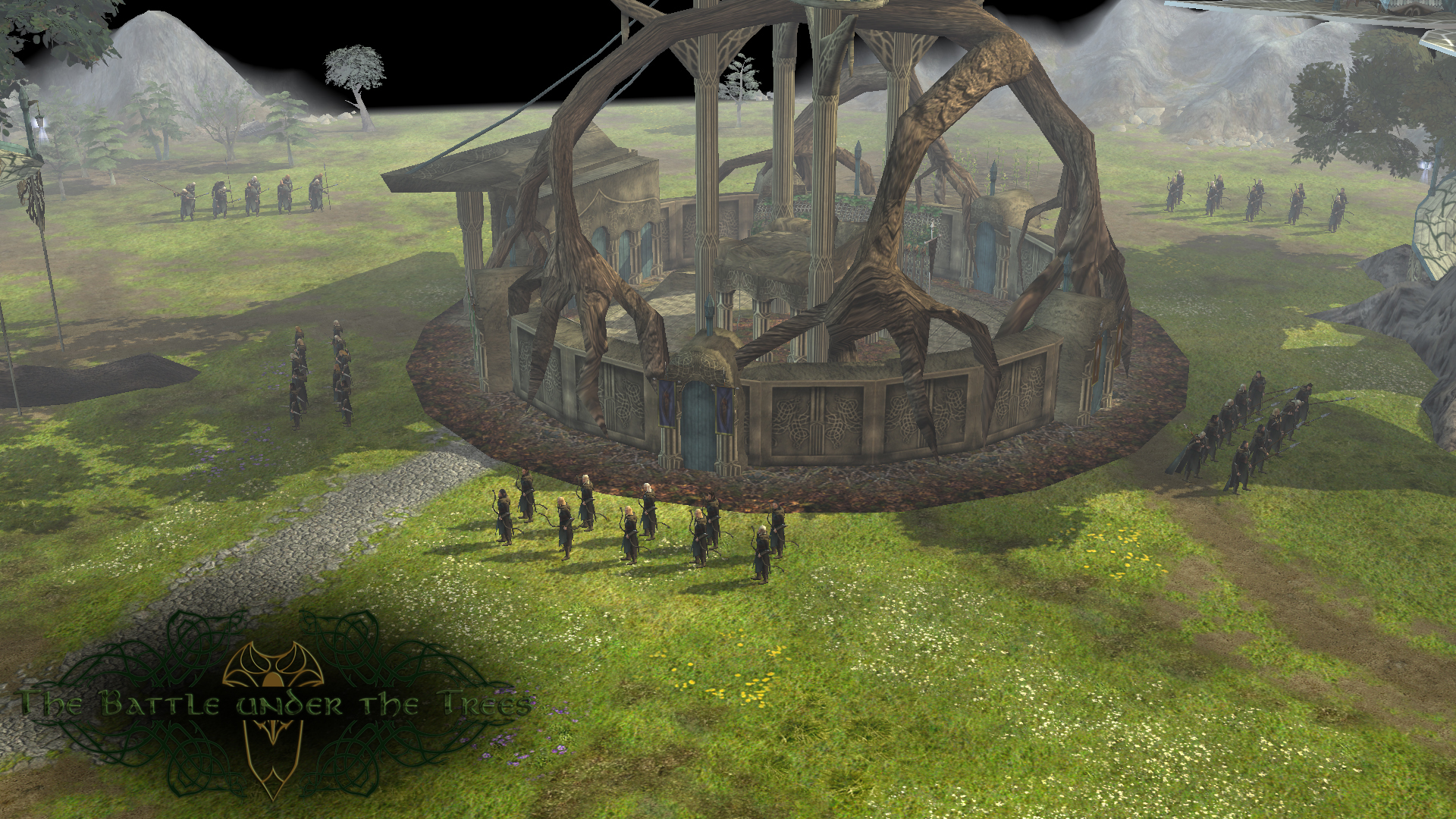 The Mirkwood units are split in 3 main types: Archers, Spearman and Swordsmen. They don’t have elite units, the basic units are the Elite units, ish... The core units are a battalion for each type, so you have the Archer battalions, the Wardens and the Warriors. Each battalion can be recruited from a weapon-specific building (So you have a building that produces just arches, one for just spearmen, etc.). There are also the mini-hero units and the Lothlorien units but they are obtained in another manner. 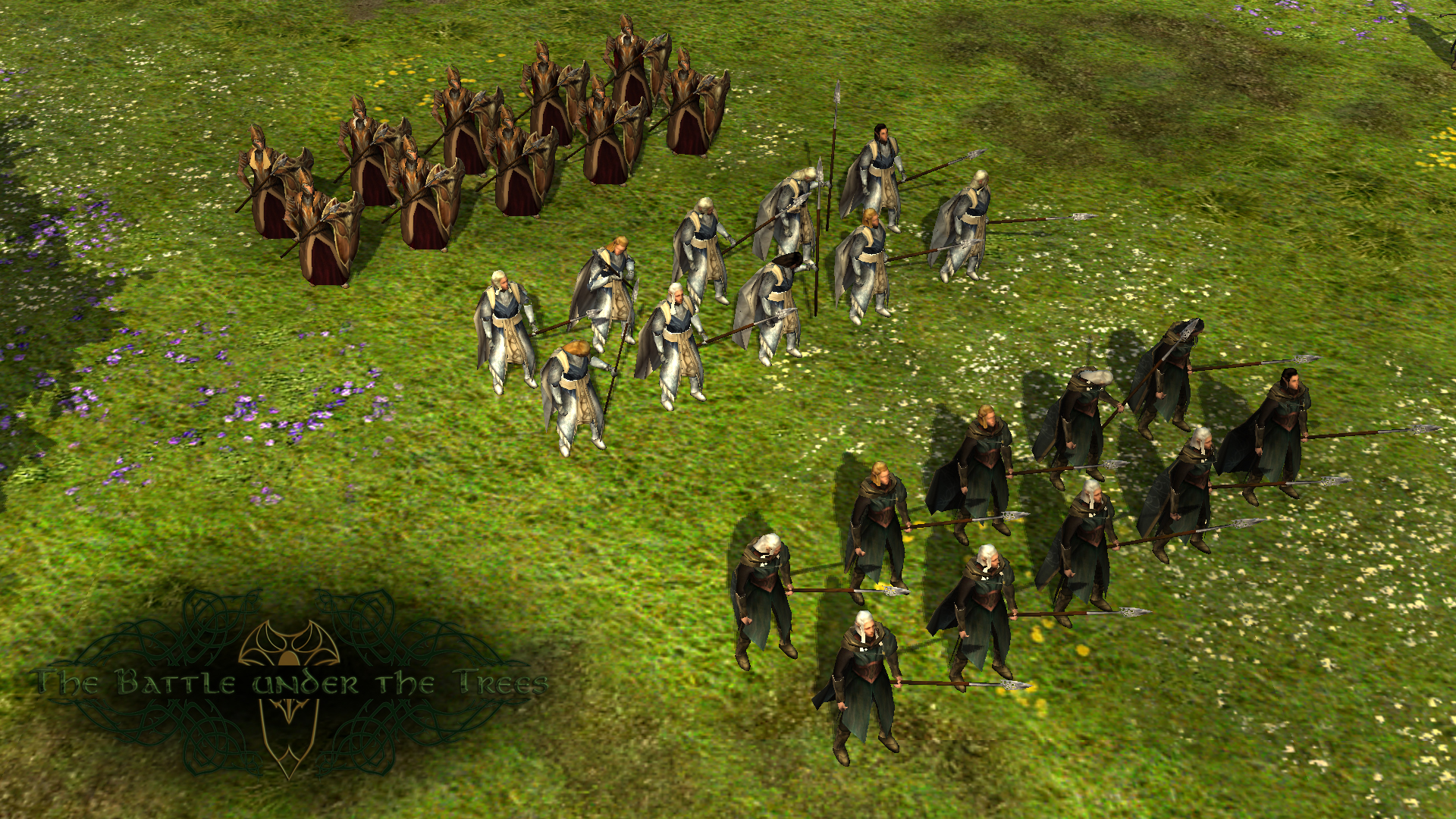 Here is the interesting part, all of your units will spawn as scouts, so with light armor. This means they will have high damage and speed but very low health/armor. In order to make your units more resistant you need to give them upgrades. In this case you have to choose Medium or Heavy armor. Medium will balance the damage, speed and attack of the units while Heavy will bolster the armor of the units at the cost of attack and movement. These are the only upgrades units have since all of the stats are reflected by just 3 states (light, medium, heavy). All these changes are visually suggested.

Moreover depending on what upgrade units have they may get or lose certain abilities. For example, the light archers can spawn a sentry tower on a tree but will lose that if they get medium or heavy armor. Units can be only in one state at any given time. 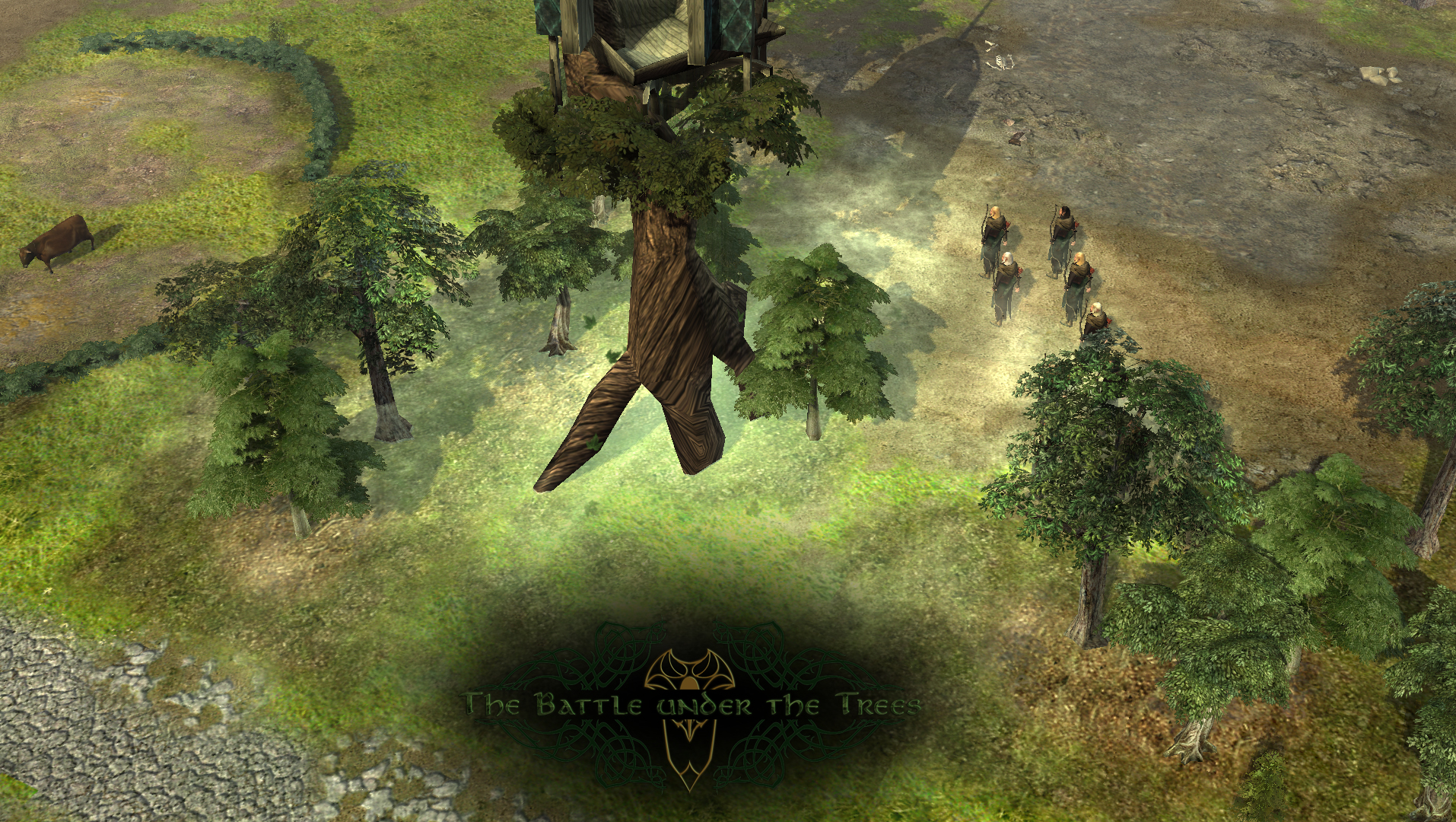 I think this is enough for now, pretty long post. I will have more updates the coming weeks, some of them even more interesting I guess.

This is super epic, NewErr. I love the upgrade system that they have, and the architecture, the trees and the stonework and the design are mouthwatering.

As always, your kind words are very welcome Matt.

The buildings are very cool!

Whilst some are just ohh-ing and ahh-ing over AotR and Edain, many seem to fail to see this jewel of a mod getting more and more polished. I believe RC can end up outshining the others in the *near* future :D

Wow. Thank you for all the support and good thoughts. I remember other people saying this back when RC Mod was at it's peak. I don't want to outshine anyone, I want all people to play all the BFME mods because every mod has it's own focus and goals. Of course I do want many people to play my mod. :D

I'm following this mod with interest definitely. Good luck with the future!

Wonderful article. I'm thoroughly impressed at how much you get done.