Battle Jump 0.9.1. The game is now corss-platform, so you can download the lastest version for Windows, Linux and MacOS X by visiting the official website of the project. 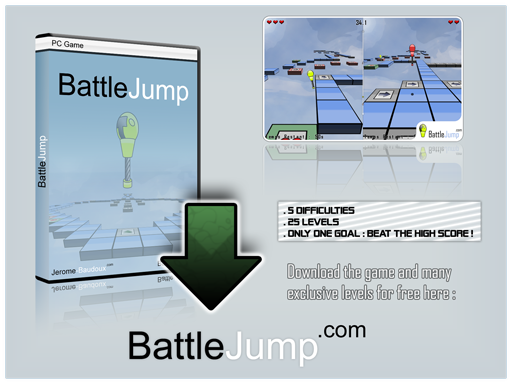 Battle Jump is a dexterity game in which you incarnate a character that can only move by making leaps. You must bring your Jumper at the end of levels filled with traps. Your skills will be sorely tested, and your only goal will be to finish the level the faster you can.

You will need to perfectly control your character in order to avoid falling into a hole or a trap.
The game contains several levels with a progressive difficulty. If you think the first levels are too easy for you, don't worry, the last levels will be much complex.
It is also possible to create your own levels with the editor, or to download dozens of levels made by the community.
With its two-players mod in split screen, you can battle anyone in races where every mistake can be fatal.

Battle Jump allows you to send your scores to the website in order to compare them with the other players.
The game is still in development so it is constantly evolving, and new features are added regularly. I encourage you to monitor the project.
Battle jump is currently in its 0.9.1 version. This versions brings some new features :

The game is now corss-platform, so you can download the lastest version for Windows, Linux and MacOS X by visiting the official website of the project.
Comments

Looks unquie just not my type of game looks to simple for me.

Wow, it looks super fun, good job man, btw have you used any open source stuff such as gfx renderer for your game?

Thanks for you comments :)

The game is not made with fancy technology. It's basically just made with C++/openGL, with no shader.

I use some open source libs such as SDL for loading images or playing a sound... and that's about it.

The sounds comes from various artists who puts their works on free licence (listed in the readme), and the images are mostly made by me.