Two weeks ago, we talked about the manor level and why we decided to do things the way they are right now. This week, the focus continues on the third level, the underground and on the overall campaign difficulty.

Linked (a bit late as always) from the official website

Two weeks ago, we talked about the manor level and why we decided to do things the way they are right now. This week, the focus continues on the third level, the underground and on the overall campaign difficulty.

When Nicolas wrote the game design document about the campaign, one of the key elements was to build a rather long campaign with changing environments and gameplay. The goal was to provide players with a non-monotonous campaign that would work perfectly well as a whole, but also when playing each level independently. The global path had to be logical, but the gameplay type (open space/close combat) and the environment (exterior/interior) had to change beetween each map, following this approximative pattern : 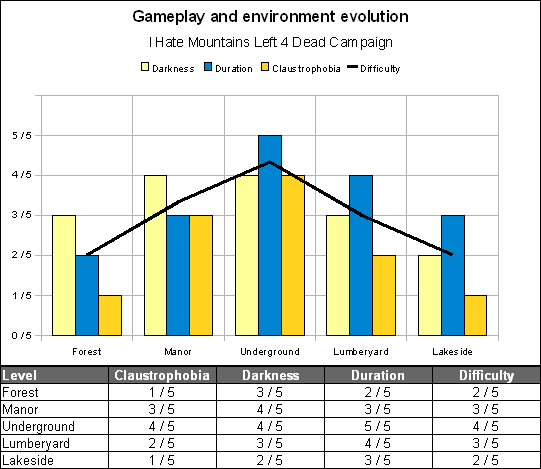 As you can see, when you combine the different elements that make a Left 4 Dead level more or less difficult, we get the overall difficulty of each level. In game, this is pretty much correct for the moment, when testing we feel that each map is as difficult as it should be, and the third map is really difficult. Much like every official campaigns, we tried to balance the difficulty around the third map. The campaign starts slowly, progressively reach a crescendo at the third map (No Mercy's sewers, Death Toll's church, Dead Air's construction site, Blood Harvest's bridge) and slows down until the final arrives. But our third map is really hard.

At start, the underground level was supposed to be a catacomb-ish level, with crypts, coffins and all the extra cliché things you can think about. But when the prototyping time came, it was clear that it would never work the intended way. No one would ever want to walk in an endless network of catacombs and crypts during half an hour, plus that didn't seem very realistic from the start. That's why we decided to mix several underground environments in the same level. This choice was not really popular among the team until we all actually saw the result when the level reached a decently polished state. The different environments blended together perfectly well and if you didn't pay attention to it, you didn't even notice the changes until the end. For the moment, the level is composed of four different underground environments and architectures.

Iterative screenshots of a part of the underground level 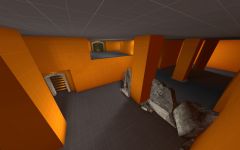 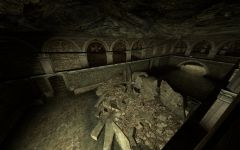 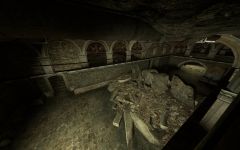 The underground level was entirely made in a really short time, I'd say three weeks. Prototyping, gameplay tests, architecture and prop flooding were all completed in a matter of weeks. The only problem with this level is its length. For the moment, this is the longest level I ever played on Left 4 Dead. Taking the shortest path, it takes 3 minutes to run from the beginning to the end, while it only takes 2:25 on the longest Left 4 Dead level (No Mercy's sewers, which is already a quite difficult level). For the moment, we believe the map is good as it is, because we're able to finish it using the expert difficulty, but we are not against the idea of cutting a whole part if it's really too long and difficult.

One of the key elements of making a level more or less difficult without interfering too much on its length and geometry is to tweak the item/weapon spawning. Unlike Left 4 Dead official campaigns, we decided to give more than 4 first aid kits in this level. Because the crescendo event is located in the middle of the level, you often reach it in an already bad shape... thus, you leave it in a terrible shape (if not dead), and there's a whole half of the level left to do. That's why we decided to give more than 4 first aid kits, because we know every player isn't the best player in the world. The trap here is that we're not really giving 4 extra first aid kits just before the crescendo event, so there won't be enough for everyone... We believe it will force players to play efficiently and work as a team (or they will just insult each others and keep their first aid kits for themselves).

That's all for the underground level, we are against spoiling everything before the release, so you probably won't get more details before the release. On a side note, a few people asked us if we could give an approximative completion percentage for each level, so here it is:

Stay tuned for more developer banter until the release.

Wow, knowing your previus work, for sure I'll be looking for this one.

Looking a very good mod. Can't wait to play it! Any chance of a video?

****, Yeah! I´ll see foward to the release. Can you release it on steam? As a little extra, like that HL² map? If you talk with Valve, you may get that through....

This Scenario is gonna be amazing!!!!!!

Every one hate mountains now, for the darkness has come to unreality.

This remind me of Alan Wake, can't wait to play it!