After a long break, Mythic Realms is finally back in development, and with a new and improved engine!

Posted by rockinraymond on Apr 4th, 2015

Its been well over a year since I have last touched Mythic Realms. With High School ending and beginning my first year of college, It was simply impossible to keep tabs on it development. However I had never forgot about it and It constantly remained in the back of my mind. But now Mythic Realms is going back into development, and now it is even in a stronger engine that is much more reliable and has several features that make the game look much nicer. Due to the engine switch, I'm going to have to rebuild the zones, but most of my scripting work done on the last game should port over, so I'm not taking that far of a step backwards. For now here is a screenshot to show a few of the new graphical features in the engine. 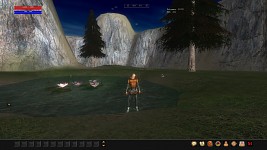