Summary of news, additions & tweaks implemented in to Awaken during past month including latest dev. diary video!

After more than a month im back with another update! Again, a lot happened as i ve got another one week long vacation and spent it by improving Awaken and polishing everything as best as i could. Lets break all additons and improvements in to few sections: 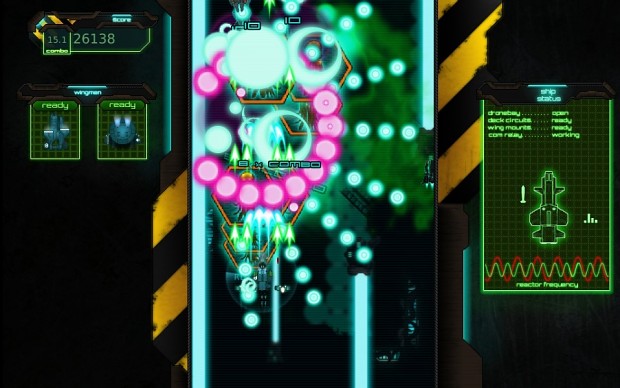 As you probably allready noticed from the screens around, the game screen orientation was changed from horizontal to vertical. Awaken was originaly designed as simplified raptor/tyrian clone for web browsers and both of these games have horizontal screen and i was going to keep screen this way for several reasons, however the main reason was i did not know how to alter the screen to vertical orientation properly with possibilty of having different objects like hud to the sides of the gaming scene.
Now half year after i started working on this game i realized its quite easy and after i spent dozen of hours playing various SHMUP games for analyzing reasons i decided to alter Awaken to vertical screen as it offers many advantages when compared to horizontal scene. Its much easier to design enemies right now as i ve got a lot of vertical space aviable now while player have more time to react to the threaths so i can throw more foes at player while keeping situation managable for him. Basicaly this change means - more enemies on screen = more bullets aiming at player = more explosi intense acti fun.

Going along with this, i needed to rework user interface and while its still work in progress i like the direction of all this allready. However there is still a lot left to do. 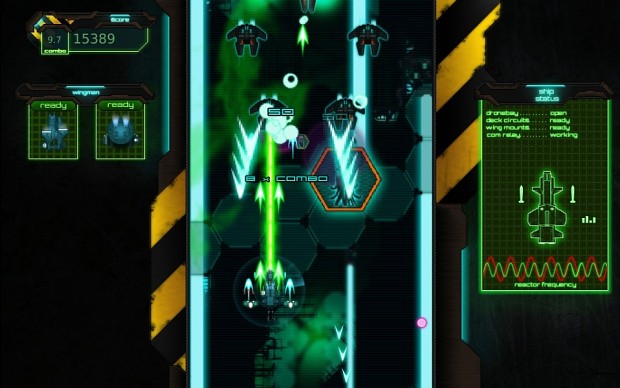 All the weapons player ll be able to unlock during storyline campaing in order to prepare his ship for challenges and end game solo missions are now present in the game. You can divide them in to laser and plasma. Lasers are best for focused damage output directly in front of the ship, while plasma do the oposite. However as players ship has 3 item slots(front deck/wing pods/drone bay) it is possible to combine weapons to match everyones needs. And if thats not enought, then specialized pieces of weaponary are just around corner, however it ll take little more effort to unlock them as they can be aquired through achivement system.


Yeah, i was against this feature since begining but while analyzing many arcade shooters, i realized the ability to collect anything that falls of from dead enemies adds a bit of fun. I felt like im reinventing the wheel when i finaly added bounty tokkens, but thats life and sometimes opinions changes under the wight of arguments(enriching scoring debate with my friend in this case). But lets talk a bit about scoring mechanism in Awaken.

If you kill the enemy you got score value(x multipier) and increase your score multipier a little. When you kill multiple enemies you get score bonus, a bit of multipier increase and a bit of shield recharge. The ammount depends on how long your kill chain is.

The multipier decreases on its own over the time, so you have to stay agresive to keep it growing.

When multipier is above 5.0 the enemies ll start droping Silver Kraken Tokkens and when your multipier is above 10.0 enemies ll provide Gold Kraken Tokkens. Tokkens ll provide additional score bonus, the faster you collect it, the bigger the bonus is. Its represented by simple ingame animation, as when dropped, the tokken grow up fast and then starts shrinking, and after about 2 seconds it disappears.
This is one of the ways how to make player even more agresive and force him to move closer to the enemies, while rewarding the extra effort by score bonus.

Hope you ll like these additions as i ve spent quite some time implementing them, hope you ll watch new dev. diary video to see everything mentioned in motion, and i especialy hope you ll be interested in future updates!

With regards & thanks for reading