Here we look at a few sketchs by one of our concept artists, as well as a tech demo of some of the particle effects used in X32I - Redemption.

Welcome to the August update of X32I Redemption this time we are taking a look at a few sketch designs from jcplf, a early cockpit look, and a tech demo video of the particle effects used in X32I. 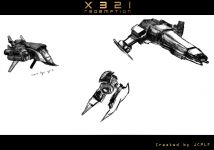 The cockpit is very early work, currently it only contains the outer shell there is no inner design for it just yet. 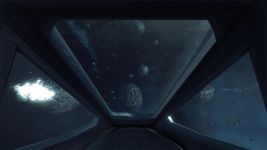 We have a new forum intergrated into the site up and running, stop by and say hello and ask away, as the developers of X32I will be keeping a close on the forum, so if you want to catch out attention that's the best place to do it. 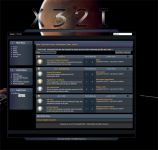 
That's all for this month, just don't go expecting a shiny video in every monthly release. :P

That wormhole is mesmerising. Then you see the view from outside and your like holy crap that thing looks way scary. And them asteroids were very cool.

God... your work is really amazing. The Cryengine 2 is marvellous. Keep doing!

Nothing is more fascinating then space. I'll be following this mod's every move.

I agree, and it's why I started the project. :)

Glad to see you're still making progress, congrats, its imressive!

Thanks for the comments people, we are really trying hard to bring you one of the best space games you'll ever play, but don't quote me on that. ¬_¬ :P

love the asteroid field. how is performance in an area like that with a few ships around?

It's too early to quote performance numbers because everything is always being tweaked, but the performance in that particular field, is 50FPS average at 1920x1080, DX10 Max settings.

was the sound ingame? anyway nice job on all of it, looks cool!!

The sound is not technically in-game, as this is just a tech-demo video and I wrote some music to fit the tech demo video. However, you can take this track as an example of where the music might be going. It's very early days in terms of audio production for this project, so there is still a lot of experimenting going on right now.

Thanks for all the lovely feedback.

well done, the "real space-opera game" is not born already.So , i wanna trust in your work.
sry 4 my bad english.

Have you played X2 or X3: The Reunion yet?
Both games are brilliant space games, and IMO the best space games to date. The only problem with them at the moment is that you can't land on planets, but considering how vast both games are and the complexity of the gameplay, it's no wonder the developers haven't stretched their reach onto planets just yet. Maybe in future X games they will dive into the planetry stuff.

They are good sandbox games, however they are really weak games when you compare them to Tie-Fighter and Freespace 2.

They are good for people who like to spend time doing anything they want, but they have a REALLY weak story, and some laughably poor voice acting.

That is some pukingly glorious eye candy! Win. Nuff' Said.

Awesome looking mod. Reminds me of Sins of a Solar Empire, but in 1st person. Def'netly tracking this one.

keep on, this will be great ;)

That was absolutely fantastic. The wormhole looks a little rough around the edges, but it still looked great for a mod in these early stages. The asteroid field was very impressive as well.

Right now I'm especially amazed with the music creating such a deep and immersive atmosphere, perfectly complementing the beautiful imagery. I regularly try out different mods for all kinds of games, but only very seldomly does the musical soundtrack reach that kind of quality. Sounds very professional and better than many many retail games.