In our penultimate post about Atlantis we discuss the enemies you will encounter there, the problems we ran into while making them, and how we ran away from it all screaming and waving our hands in the air.

We've been super busy here doing a lot of planning for Okhlos and we now have a much clearer road-map for development going forward, including dates and milestones we want to hit. Let’s hope we manage to stick to them!

Our last update – Water in Okhlos – seems to have been pretty popular, and we couldn't be happier about it. We'd put the update up on Gamasutra as well, apart from up on our website, and it was featured on the front page!

Today, in Atlantean Problems Part Trois, the Revenge we’ll talk about the enemies you’ll encounter in Atlantis. If you've missed Part I and II of our ongoing Dev Blog feature on Atlantis, you can catch up on them here and here.

The enemies
Being the brilliant and original developers that we are, we decided that our visual theme for Atlantis is – you guessed it – aquatic! The enemies for these levels have thus been redesigned accordingly in order to transmit that watery vibe. 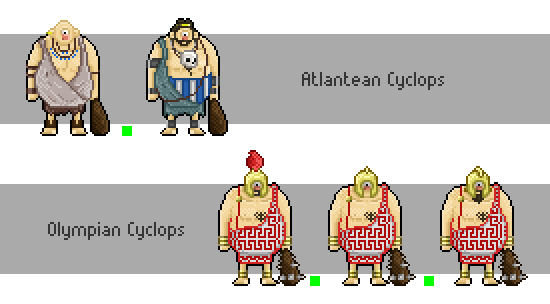 These are the basic melee units for Atlantis. They’re violent and their devastating blows mean a world of hurt for the mob and its leader. (Hint: that’s you!)
We used the original base of the Olympian Cyclops (from earlier on in the game) to design the new Atlantean Cyclops, which made the whole process far easier than it would've been otherwise. The club still looks kinda boring though, so we’ll probably end up redesigning that as well.

These Atlantean giants, while also melee units, will strike with powerful area attacks that will hit the whole mob at once. Gigantes means giant in Greek, and it’s where the word Gigabyte comes from. 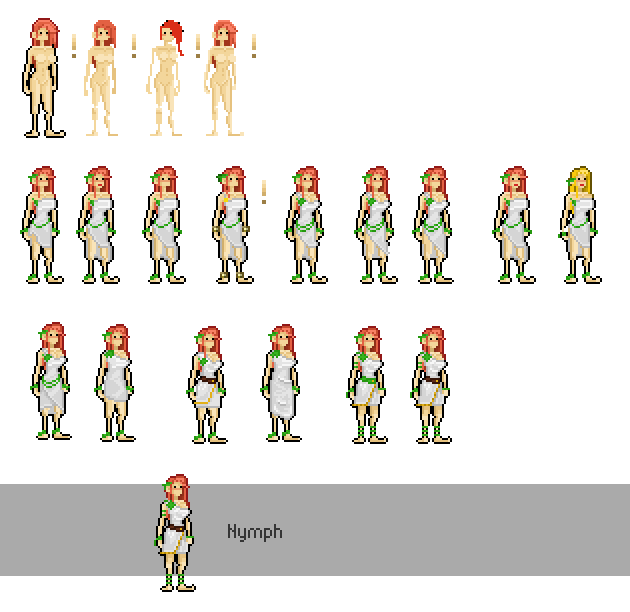 The Nymphs are a new unit we designed specifically for Atlantis! As you can see above, they were kinda tricky to design, and we went through quite a few different iterations before we arrived to a version we were truly happy with.
Being forest spirits, Nymphs are usually linked to Aphrodite, and in the game they’ll be making the most of their charm as they run around and convert pedestrians into enemies!

In the animation above you can see that between our original draft of the Nymph and its final version we've added two extra frames. These give a little more air time to her skipping, and make it seem more natural and relaxed.

These Tritons/Mermen shoot water blasts!As you can see, our first iterations of the mermen were fishier and less humanoid, but the combination of blue and green made it very hard to see them against the background of the stage, so we ditched that design altogether. We haven’t animated the water blasts yet, but they’ll very likely shoot out from the weird staff the Mermen are holding. (And not from their mouths, although the idea is very tempting.)

Careful - the Lamia will devour pedestrians and will poison units in your mob! You’ll have to be quick about dispersing the mob when that happens, otherwise the poison will spread onto other units and soon the whole mob will be doomed!

Truth be told, we haven’t integrated the Lamia into the game yet, so we don’t really know what to expect from them right now, but between them and the Nymphs, no pedestrian is safe! It might be a good idea to grab them as quick as you possibly can before they’re eaten – or worse – charmed to fight against you!

So this is it for this week! We hope you’ve enjoyed this little insight into the enemies you’ll be encountering in Atlantis. Next week we’ll have Part IV of our Dev Blog feature on Atlantis. It’ll be our last update to focus on this game world, and we’ll be talking about the perils and hazards that inhabit it. We hope to see you then!

As always, this article was proofread and edited by you friendly neighborhood @pfque_!

Not to be nitpicky, but the picture of the Lamia has it spelt "Lamnia". Otherwise, great post.

yeah :P
Funny story: We actually thought that it was Lamnia because greeks are weird. Luckyly for us, Pfque corrected us, but we missed the graphic.

Thanks for pointing that out!!