A bit of work has been done since the last news posting. This one will bring you up to date.

I took a break from modeling and texturing to get some code work done, but not before finishing up the pick up items that you will be able to acquire when playing Asteroid Miner. The screenshot below shows them in all of the various stages that you can choose to play in.There's still some work to do adjusting the lighting for each of the stages, but you can see how the stage environment reflects in the lighting on the items. 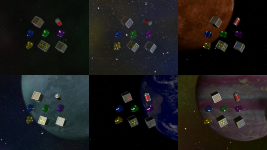 The colored minerals are what you pick up to score. The colors don't really make a difference, they are just there for variety. But you will get more points for picking up minerals that come from the smaller, harder to hit asteroids than you will for those from the larger asteroids.

The battery looking thing is the power cell that you'll need to pick up to keep the power to your defensive abilities charged up.

The boxes are the various special weapons that you can get. There's a nuclear missile, that will damage more than just the asteroid that was hit. A laser that will give you a continuous and more precise attack. And something tentatively called a repeater, that will allow your blaster fire to go through an asteroid and possibly hit the ones behind it. 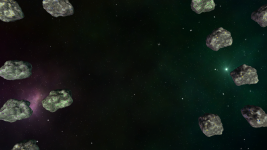 I also got the spawn code that I talked about in one of the previous posts finished. In this screenshot you can see the freshly spawned asteroids as they will appear whenever a new wave of them comes in. Asteroids will spawn a new wave whenever all of the previous ones are destroyed. 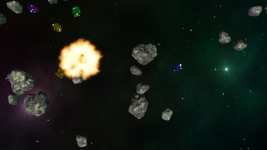 In fact, all of the asteroid code is now finished. Here you can see an asteroid exploding and splitting into two smaller asteroids, as well as leaving behind a mineral deposit for the player to pick up and earn some points. Right now the player still isn't in the game, so I'm just hitting a mouse button to make the asteroids explode. But I hope to have the player controls in soon, and maybe an early gameplay video done soon after that.