Most of the weapons and defenses have been coded into Asteroid Miner.

I got a fair amount done on the gameplay for Asteroid Miner since the last update. The player can now use some of the defenses specific to whichever ship they choose (that ship is still a placeholder cube until I get the models textured). They can also pickup the weapons crates that appear randomly. 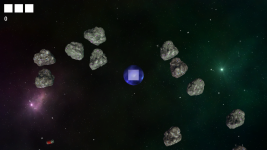 The screenshot above is a shot of the shield activated. It is the only one of the defenses that a screenshot makes sense for. The other defense, a repulser that pushing nearby asteroids away, doesn't have any visual representation that would make sense in a still frame. The warp defense is not yet coded.

The repulser is a one shot defense, whereas the shield is sustained for as long as you hold down the button. For that reason, the shield will slowly drain power and the repulser will take it away in chunks. Because the repulser is much more effective at clearing a path, it can be used less often on a single charge than the shield can. 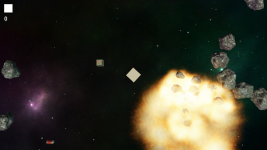 Here you can see the nuke in action. In that screenshot it was the first shot and only shot I fired, so all of the asteroids that are broken up were done by that one blast. Rather than just destroying the asteroid that you hit, it destroys all of them within a given, rather large, radius. Because of its power you can only get one shot of the nuke each time you pickup its crate. 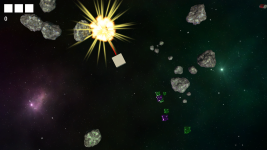 Here you see the laser in action. I'm still tweaking the amount of time that the player can use the laser before it runs out. Being a sustained and easily aimed shot, it could make the game unplayable easy by allowing you to clear a whole level in a short amount of time. I had originally thought of making the laser take a few seconds to destroy an asteroid, but didn't really like that idea or the way it made the gameplay feel. Since you don't get points for destroying asteroids, but rather by picking up the minerals that they drop, I may be worrying too much about how fast you can destroy the asteroids. If you cleared the wave instantly, you wouldn't have time to pick up all the minerals that were left.

The third and final weapon is also done. It is a repeater shot that will function just like the default blaster, but continue on after it hits an asteroid. This allows you to take out any asteroids that can be hit with a straight line through them at once. There's no screenshot of that because it looks just like the regular blaster except it is blue instead of green.

I still need to code the warp defense, and the power meter that shows you how much power you have remaining for those defenses. After that is done, the last bit of coding before the gameplay is finished will be to add in the enemies and adjust the difficulty as the game progresses. I'll likely get back to creating graphics before adding that code so I don't have to use placeholders anymore.