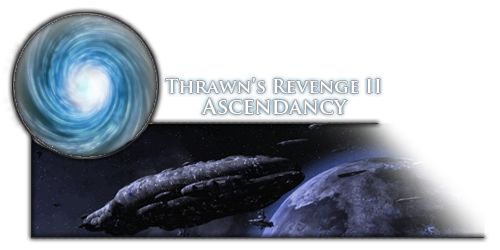 As I was compiling all the updates for this release cycle of our projects for the helpful new News Post Compendium thread on the forums, I noticed that while Ascendancy has had some very specific updates, we haven't done an overview of some of the more general changes yet. Because of the proximity of the 0.95 and 1.0 releases, which were primarily about setting up basic content, 1.1 is the first release where we really have had an opportunity to address some of the bigger points of community feedback, instead of just working on the basic content of the mod. Hopefully this update will give a better idea of some of those features, as well as an overview of how testing and future releases will go.

First, one of the more common complaints against 1.0 relate to some of the icons- planetary icons aren't particularly clear, and unit icons tend to take up too much screenspace. We were attempting to simplify the information as much as we could, and also trying to address the icon situation in a way to get around the fact that Star Wars ships in the same faction tend to have a similar profile, making the Sins style less feasible. This was not always successful. The changes to presentation of the unit stacks/force indicators beside planets were also harder for some players to find. So, since the last release OzWolf has redone all of these aspects entirely; unit pips should take up less screenspace, hopefully still being clear enough about what they are, while maintaining the larger more prominent style for planet infrastructure, highlighting its importance and helping it stand out. We still feel that having just renders of the planets, while technically being the most "accurate" isn't always the most clear (especially when so many are primarily green), so we've tried to use some simple, clean symbols to represent them, as you can see below. We've already posted some screenshots in the past of the updated menus and such, so here are some more screenshots of some of the ingame HUD-related changes, including planets, unit icons, and all of that. Crucially, we've also played around with team colours. Hopefully these changes help more easily provide information to players than previous versions. 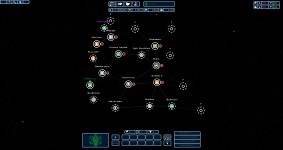 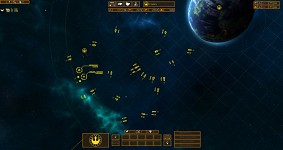 For the fleshing out of the factions in terms of additional tech and abilities, I have been doing full faction profiles on Corey Loses (Hand and Remnant still forthcoming, so I won't say too much about that here, save that I have been bringing each faction up to at least 100 research options for 1.1, with plans to expand that as we figure out which gaps each faction needs to fill, and Bane & I have been filling all the empty ability slots from 1.0, which should help give some added flair and flavour to the different units and factions.

Primarily, though, almost every single stat has been changed in a significant way. The cost and times associated with research have all been adjusted, which should help with the early game slog, while unit upkeep costs help to keep the late-game credit and resource overflow in check. While the stats are not yet final, and will be regularly tweaked up until release, we have a full spreadsheet with all damage, health, and other helpful values which should both help players understand how the units work, and help bring inconsistencies or outliers to the attention of the team more easily. Keep in mind, though, that while stats like this are helpful they don't always tell the full story (especially with abilities coming into play more). This spreadsheet can be found here, and will be updated as we approach release and beyond as we make further changes:

It's not reflected in this spreadsheet just yet, but we've rescaled shield regeneration, significantly increasing the speed at which ships will recharge, which was far too low before. We also plan to do some alterations to ship ranges in the future, both to add some variation between units, and also to help combat be a bit more visible (right now ships are probably a bit more spread out than we'd like).

Alongside this, of course, we've worked over the last year to resolve bugs with unit behaviour as they've been reported, including the VSD firing issues, along with trying to address some of the more abusive strategies. The function of starbases has been greatly expanded as well, and the Esseles-class Civilian Station has been removed. Stations, now being the Cardan (Remnant), Empress (New Republic), Validusia (Alignment, pictured below) and Oto (Hand), should now each be a lot more capable than the Command Station/Empress of 1.0, while still reflecting the unique flavour of the factions.

When it comes to number changes like these, it's hard to really get across what we're doing without being able to play with them for yourself, bringing us to... 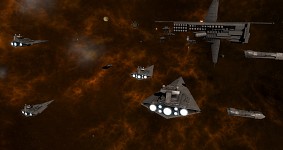 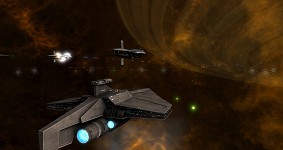 A lot of the biggest issue with where the mod currently stands in our mind come as a result of how long it has been between releases, with 1.0 having been released essentially over a year ago in its beta form. In our experience with Imperial Civil War, while balance was still certainly a concern, it was not a primarily multiplayer or "competitive" game, which meant we could take longer to address some edge strategies that would be overpowered- having 6 months to a year between releases doesn't impact enjoyment as much. It also had a much more stable foundaction, being several releases in. In Ascendancy, with more moving parts and as a primarily-multiplayer experience and without such a long history of iterating on feedback, we need to be able to react more readily to balance or design issues as they arise, rather than waiting for the larger content release goals to be met. This is something we will be changing going forward. We will still be structuring the release of new content versions similarly (ie, not releasing the upcoming factions piecemeal), however within those cycles we plan to have a new release or patch to address any issues in game mechanics or balancing every 2-4 months, as necessary (on top of any hotfixes necessary at release). This has been especially obvious in 1.0 since, as I say, it was the first release, and therefore does not benefit from the ability to have been made and iterated on with larger amounts of player feedback.

To that end, we will be starting a semi-open beta process on our forums at www.thrawnsrevenge.com/forums around the end of June. This will be done in two progressively more open stages. First, once we're satisfied we've caught the major bugs with our internal development and testing teams, we will be opening up the beta to members of the Admiral's Lounge on the forums. After a week or two weeks there, we will open it up to all forum members until we're satisfied that it's ready for release. To be clear, the entire point of doing a beta like this is to provide feedback before a full release to ensure a stable, fun release, not to simply play an early version. As such, we are setting it up in the way that is most conducive to managing that process, especially since we're likely gonna have to do a lot of explaining how to use GitHub. We will be setting up boards for reports, updates, changelogs and multiplayer matches during the process.