In which I describe how my progress on the final boss is, what my latest playtests have turned up, and show my new promotional art.

A lot of things have happened since I wrote last month, so lets get to it!

So I've been working on some banner art and some other goodies. I already uploaded it to most portals I'm hosting the devlog on, so you might've already seen it. 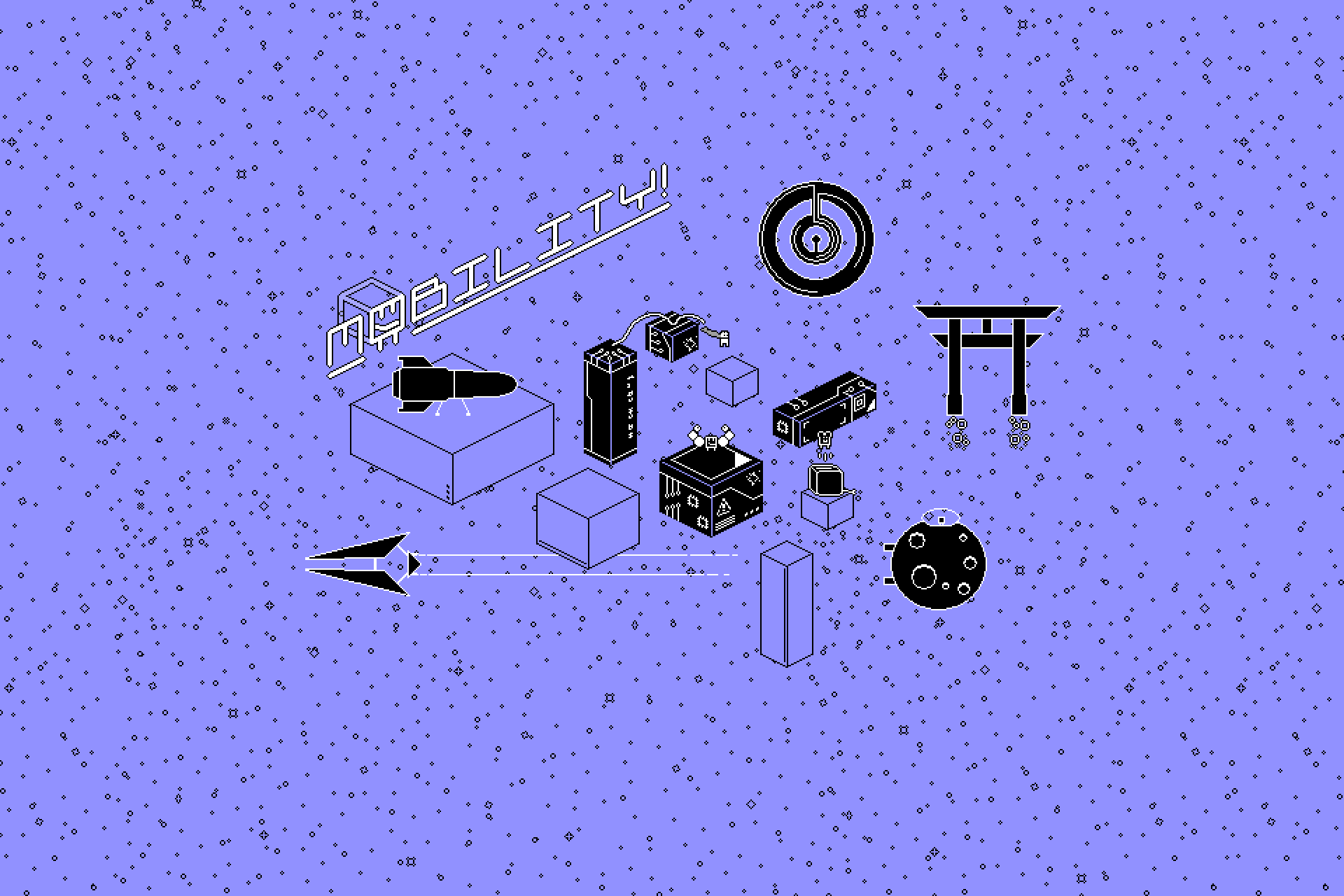 This uses an isometric style that I really like using, and neatly fits the overall very minimalist style of the game. I'm also preparing this artwork, which is the sprite of the main character using other sprites as building blocks: 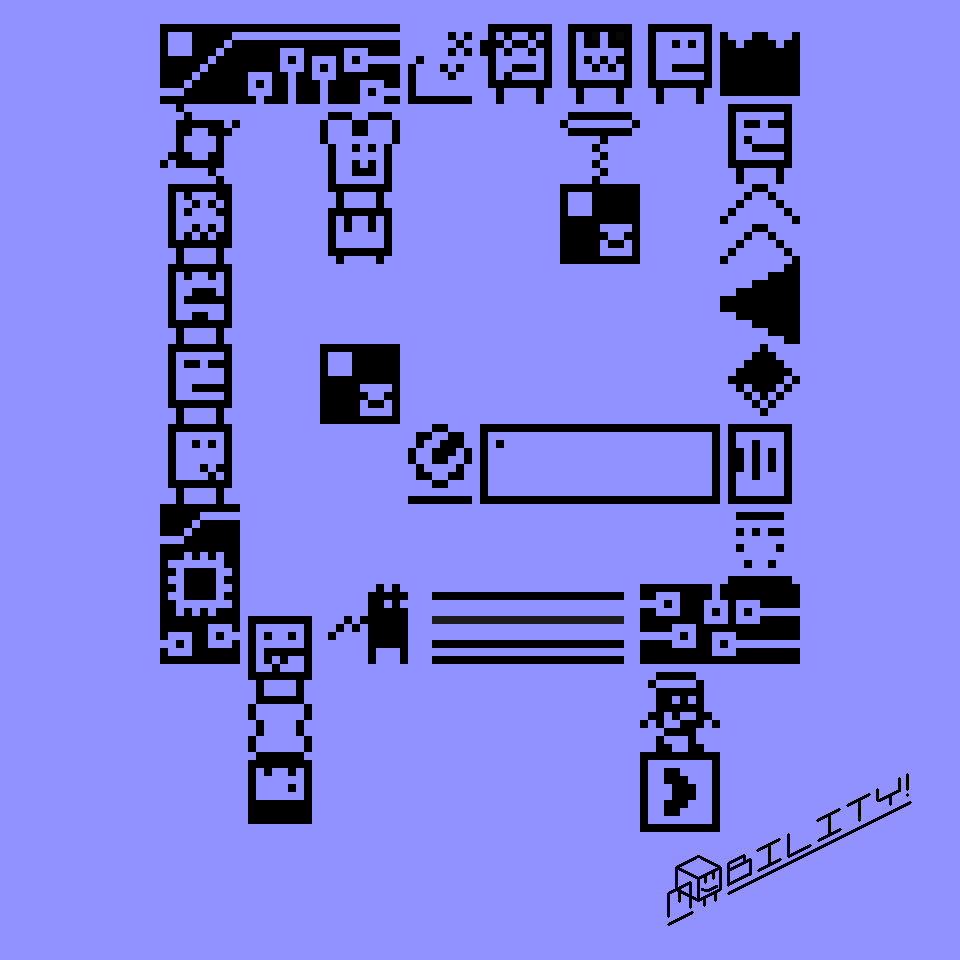 I had two more people playtest Mobility in the meanwhile. I had them play through the entirety of the game, with exception of the final boss (who was not finished yet). The results were very interesting.

One of the things I spotted was that nobody used the backflip, a move in the game that allows you to do a higher jump by jumping while crouching and standing still. Reasons for this are that the move is never explained in the game, and is also never really necessary to complete levels, unlike the long jump for example. This is why I decided to remove the backflip from the game completely. A bit harsh, perhaps, but I was thinking for longer about doing this, and from what I've seen, nobody is bothered by the lack of the move. I still need to adjust some levels slightly to compensate, but overall this removal has a positive impact on gameplay.

Another change that I was experimenting with was a progress bar. It fills up for every block you activate, and is full when the level is completed. It didn't really work in that state since, once again, nobody noticed its existence. So I changed my approach slightly: when you've almost activated all blocks, a little text pops out of them saying '3 more!', indicating the amount of platforms yet to activate. I haven't tested it yet, but I feel it works pretty well so far. This also avoids the scenario where the players has completed the level, but has skipped some blocks by accident, and this new feature will alert them in time.

Some people even thought the game was too easy, and I'm experimenting with a new difficulty mode specially for them. It is currently named 'Growth', and is simillar to Vanish, except once the blocks disappear after being activated, they turn into slowly growing spikes. Not really sure if I want to have this in the final game yet, but it is already pretty frantic and could be a nice 'secret' mode.

There where other items as well, but these were mostly just small topics. Playtesting can be super interesting, and the only way to discover problems like these. I'm currently preparing a post about playtesting for beginners on my blog, so please look forward to that!

Mobility has had support for multiple playable characters for a very long time, but has always been an afterthought. I want to keep the game as accessible as possible, so you don't have to complete every level in the game to be able to reach the ending. Nonetheless, a lot of players still do this, but weren't really rewarded for it-- which is where I'm re-introducing the playable characters as unlockables. 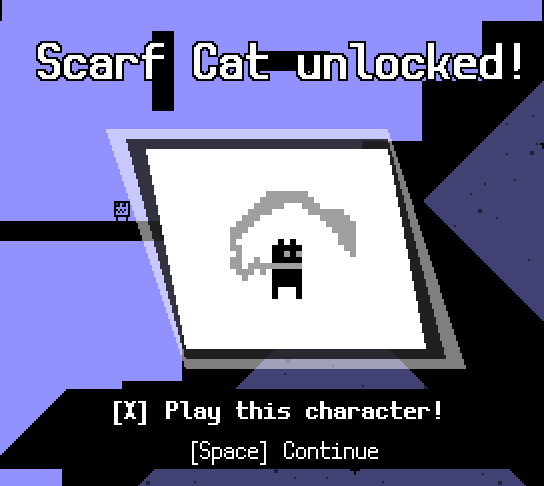 The Scarf Cat and toast character I introduced in last month's post are unlockable, the other two characters will be implemented later. Characters will not differ gameplay-wise, because that's too much trouble for me to implement.

For the first time in quite a while, I've made some progress on the final boss! Under more, the aiming bugs are fixed, and I'm building a new arena to do battle in. The current arena is kind of empty and pretty dull, but I'm thinking of keeping it as the intro of the boss fight to help teach the mechanics.

The room is now a tighter space, and there are normal blocks in the middle. I'm thinking of giving the boss a spike shield, which the players can disarm by activating all blocks. I'll also add some new attacks to replace the flailing arm one in this level.

After the final boss is finished, I'll start polishing it until about the end of the year. I'm not sure if the game will release this year (a December launch period will be very risky, even for a free game-- I'd rather wait until Jan or Feb), but at the very least I'll attempt to finish it this year. Thanks for reading!