I add armor into the game, and discuss how it works and why it is so overpowered (but still kind of balanced).

Jee! A new feature! Finally, I got the time to add (as the title may have already spoiled) armor in. I've been wanting to add armor for a very long time, but then graphics became priority, and then more fixes, and then I ran out of time.

But it's here now! Well.. not completely. It's just the helmet as of right now, but anyhow, view the screen below and I'll inform you on how the new armor works. 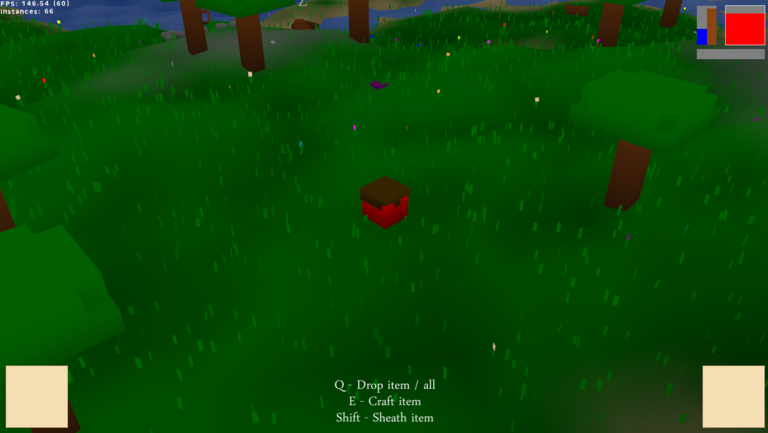 As I said previously, as of right now, it's just a helmet. The reason for this is that I don't really know what the pants should look like, so I'm taking an extra day to think of that one (although I've got some ideas already). Now, onto the armor itself.

Just like the pouch, you simply sheath the item to equip it. The armor will then sit onto the player and is replace-able by just sheathing another piece of armor. But how does the actual armor work? Your current armor can be seen in the right-top corner, around your health (the white outline). This is something I've seen in Payday: The Heist, and I really liked that feature, so I stole it.

The way it works, for those unfamiliar, is pretty simple. Something deals damage to you. Then, the armor blocks a pre-specified value of that damage. It then reduces your amount of armor by that damage value, and if the armor becomes 0, the "extra damage" is carried through, doing actual damage to your health. Imagine your armor blocks 2 damage. If a guy deals 1 damage, your armor will be halved, however, if the guy would do 3 damage, your armor would run out and you'd receive 1 health damage. Finally, the armor restores every 3 seconds.

I must say though, that leather armor is quite inaccessible, especially for the early game. Since you have to make a tanning rack and learn the armor recipe, it can require up to 12 levels! In order to balance this out, the leather armor is more powerful than you think. The helmet only already blocks all damage from simple melee enemies, and tanks (the big guys) deal half their damage. With the entire armor set, you can even block two hits from a simple enemy and one from a tank!

A final detail about the model: I didn't want it to look exactly like the armor from Minecraft, so I changed it a little bit. It does reduce it's overall look quite a bit, but it's "ok", so everyone is going to have to live with that. Anyhow, the pants will look a lot better, I promise.

I'll see when I'll add the pants in. However, right now, I gotta go play some more games. Nope, can't help it!