Hello folks, I bet you thought there was no work being covered on an update to the uprising update, well guess again, we have been tinkering with the internals of the mod and its fair to say the focus as always is twofold - Balance in the game both PvP and PvE. So let's dive in with our Balance Dev - Bane...

... So I have been semi-retired for a while from the modding scene as most people know but none the less I can never resist the pull, back to this beautiful mod, that many devs spent years crafting. We have been looking closely with the multiplayer community (shout out to their discord Discord.gg which if you are looking for advice on the game is a great place to start!) to really ascertain where some of the core mechanic issues lie.

Much work is ongoing with the federation right now, they had a very powerful economy and produced credits at an alarming rate! So much so we have had to reign it in quite a bit. Their new economy sits still at a high level but now compares very well with the other economic systems in the game, each unique in their design.

We also need to look very closely at the Defiant and Akira class, The Akira a versatile and larger cruiser was never intended to be as powerful as it currently is and this was due to the Chain Reaction Pulsar ability we brought in for fan service to Armada 2. Overall we've toned down CRP and increased the supply cost of the Akira to make it a little more reasonable for its tier.

We also felt that people were favouring the Akira over the Defiant and continuing our theme of Offensive Versus Defensive ships we've been working on improving the overall feel of the Defiant, its lost its money to mines ability which was being spammed for little gain and instead opted for Evasion and Shield Boosting abilities both which will really make the ship stand up to other later game ships in other factions rather defiantly (pun intended) shrugging off blow after blow.

I've long felt the feds needed a choice in gameplay style so we've gone and improved the Prometheus as well with a new ability a phase lance, that hits pretty hard while doing AOE splash damage, I finally got around as well to added abilities to both the Prometheus MVAM parts and the Galaxy Class Saucer Separation, this means these abilities are no longer "gimmick" abilities but if specced into provides free ability use of the ships main abilities, consider it an extension of health as well so don't underestimate the effectiveness of separating now, if you want to replay that iconic scene where Picard encounters the Borg Cube and antimatter spreading from your saucer section etc and torpedo volleying from your engineering section, well this can actually happen now in-game

Couple the Prometheus with its upgrades and speed boosting ability with Defiants and Miranda Corvettes and you have a hard-hitting force that allows the serious counterpunch it deserves.

There's still more work to do on the federation with an in-depth review on the Phoenix/ Nebula setup but overall I'm feeling extremely excited for these changes already. 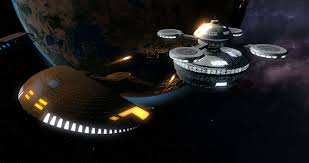 So another important aspect is understanding why people do not use Corvette Classes, Carriers and Anti Fighter Vessels.

Well, I believe this is down to the station's strength and survivability we have rejigged the logistics and trade stations as civilian stations whether military-controlled labs or civic labs in Star Trek Lore they were never heavily defended or armoured (it's not like Deep Space Nine) so we've reduced their health and armour if you imagine the elite carriers like Typhon you can now carefully place carrier strikes on the edge of a gravity well and use these tactically to surgically remove a player's logistics while you attack a different front, this has proven a popular change so far with our testing community who really have felt that this adds some counterplay mechanics sorely missing from the usual deathball fiesta that is STA3 and many sins mods (Not AOTF that's designed very differently - check it out) Most factions with the exception of the federation have few ways to defend this kind of attack without their own carriers or anti-fighter vessels so watch out for this play.

Corvettes also come into the early game a lot now, iconic ships such as the Miranda and the Jem Hadar (Bug Ship) Attack Ships can finally get some much-needed love, faster than scouts they can be used with their increase in armour and stacking ability to again devastate player logistics so you should be prepared to use these tactics against the enemy as best you can.

We are now working on other factions, looking at both the Union loyalist and Borg *shudders* and I think players will be surprised about how much love this patch is getting...

We may also have some surprising news to share very soon about some returns to the team just for this patch so stay tuned my friends...

This is Bane, Signing out...

Will you guys put in support for a faction to achieve a research victory? I've noticed it's supported in AOTF, but not in Armada 3. You can toggle the option, but I can't find the research win button

It absolutely will be implemented.

I always thought that a good theme for this option would be from the DS9 episode where they kill all the rebel Dominion troops that are using the Iconian gateways. In theory, if a side successfully researched gateway tech, space combat would be obsolete.

Looking really good, Bane! I am glad the old girl gets some love!

Sweet. Even after all these years, this mod is still my "go back to". If you guys are going big, I have a suggestion. The "travelling" phaser blasts in AOTF are visually AMAZING. I'd love to see those implemented in STA3.

THIS! I LOVE the phaser effects in AOTF, it feels straight out of the later Star Trek series, and would make this mod beyond the perfection it already is!

I know this has been discussed before, but do you perhaps have reconsidred on bringing back the option on building Untiy One station?

My friends and i really miss that station when playing as Federation and Klingons. It was also a really great model and in my opinion a true part of the franchise.

Not something I've thought about in a while but ill discuss with the team.

Is there any chance you guys will be updating the beam weapon effects to have a travel time like in the newest AOTF release?

It's such a nice detail!

Hi, Defect currently we are still discussing internally as due to STA3 fleet size these effects could dramatically affect the performance of the MOD.

These may be on your radar for the upcoming patch, but I wanted to check.

2. Bajoran sector map (reversed): While playing as Dominion and allied with another Cardassian/Dominion AI player, I can research all four treaty parts for the other races.

This is my favorite map (if you couldn't tell). LOL. Also, I absolutely love this mod and greatly appreciate the Devs countless hours, attention to detail on this outstanding mod.

Any way you guys can make the fleet sizes smaller like in AotF?

Not for STA3 is the game is designed to be a larger scale but please do enjoy both mods for their differences, after all as a coder it makes me happy people like the small scale combat in AOTF :)

I like the smaller fleet size better too. I'm also impressed with your focus on the strategy aspects. The big death ball style is something I would like to see relegated to the past in all 4X not just Sins. Bane, why are the Cardies so powerful early on? I play on "Boldly Go" and I'm always seriously behind in economy until late mid game when it starts to even out. Was it Gul? What does he have on you and the rest of the team? Photos of you not social distancing perhaps? Thank you for all the great fun which I also share with my 12 year old daughter. :)

I honestly don't know how much of my 4K hours in sins are this mod and its previous iterations. Just started big game on a custom galaxy forge map this morning.

Would you be open to other changes with the borg? Can you give them the vasari superweapon and rename it the transwarp hub - allow it to "tunnel" / target enemy planets?

Also please let the borg assimilate capital ships with their capital ships. years ago you could end up with -30 caps if you put the time in haha

Hi Slarkon, lots of changes coming to Borg but we still have to keep them balanced for multiplayer :)

The current game uses symbols for ship designs rather than outlines. This makes it impossible to distinguish ship types. The original SOSI/R uses ship outlines so you can tell what's what. How, for example, do you identify a ship that builds battle stations for every other type.

We use to use wire mesh but it became to easy for those playing multiplayer to target specific capital ships from the UI so switched to a more basic system, all our ships have a description on our info cards with counter descriptions to help you identify what does what

Please show us a Dev Diary Video of Your work.

Hi all - I am new to the game. Excited to get going. Noob question - which of the versions do I need to download to get started playing?

Your gonna need the full version of the game

Then optionally you could install the upkeep patch

Hello,
so when can we expect the update on the progress toward the update itself to be available, this 2020 or next 2021?