We took the game arcade cabinet to Campus Party, and had loads of success, read here what happened there, and the changes that we did on the game.

Hello, I am back!First, I like to say thanks to Mingamango that updated the blog while I was away. 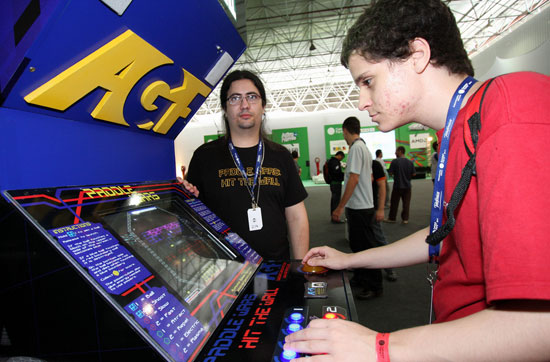 Campus Party is over, it was great, and this post is a report to you people know what happened there, first thing, the cabinet attracted attention, this is a photo of before the event even started, only workers (of all sorts, including media) was present, when the photo was taken (the guy in red is a journalist, the guy with a Paddle Wars t-shirt is me).Having the game run for several hours non-stop made several bugs pop-up, also for the first time I could watch complete strangers play the game, and note their behavior, see what was wrong, and what was right, what worked, and what did not...During the event I did 4 revisions of the Beta 5 (Beta 5 is the version in the cabinet, it is not available to the public, later I will release Beta 6 to everyone again).So, changes from Beta 4 to Beta 5:Added music to highscore (props to Skyrunner)Fixed some bugs regarding buttonsAdded tooltip box on the level set selection screenImproved the backgroundRemoved the ugly gradient on the HP bar.fixed the score fontfixed the multiplier GUImade powercubes more translucent (to make them hide less the ball during hectic scenes)added a very basic "attract" mode (ie: what happen when you don't press a button on the title screen)added a voice-over on the title-screenmade the arcade switch (can be used at home, but I won't explain it now)On the first revision I fixed some strings.Changes from Beta5 Rev1 to Rev2:Fixed the level score counter not starting from 0.Fixed some rare bugs of variables getting lost.Fixed that you could "lose" after winning.Made the grid color a bit more faint (so it don't get in the way).Raised the voice volume.Several improvements on the high-score name screen.Changed the points bonus when passing the last level.Fixed the high-score screen showing up when there was no score to save.Added information version to the title screenFixed some bugs (not all unfortunately) on the level 6 when you lose.Changed the high-score screen to use monospaced font for numbers (so you don't confuse the amount of digits)Changes to Rev3:Level 3 got reworked, it is now way easier (but still fun), and has new graphics.Changed some collision boxes on level 6, to make it easier too.Fixed more bugs related to vars dissapearing.Changes to Rev4:Fixed the last level collision box, so you don't have objects "passing through" and going out of the screen forever.I will take a while before releasing the next version, because I intend to skip Beta 5 entirely, and release the Beta 6.During Campus Party several people showed up, bugs showed up, and I had lots of fun working on the arcade, fixing it, and watching people smiling while playing, one particular guy was really interesting to the point that I borrowed someone else camera to take a photo of him. 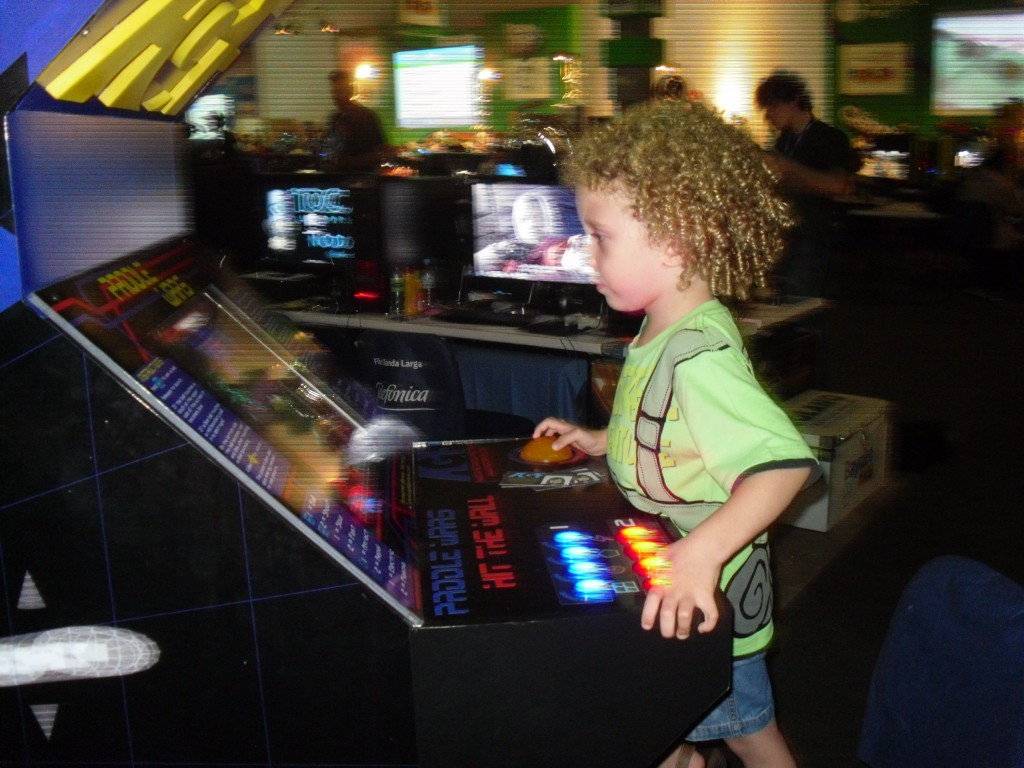 The person in the photo is a 3 year old boy, he LOVED the game, and when he was playing noone else would play... Also he was shorter than the controls, and used a chair, yet with all difficulties he would play over, and over, and over, and over... And he would only leave to grab popcorn (when he did that, other people would play :P)Also I made a competition, anyone that hit first place in the scores (but at least 1 million points) would get a t-shirt. Two guys did it, and won t-shirts :D (btw: if anyone here make a youtube video of you playing the entire game and hitting more than 2.5 million points, I will send a t-shirt for you too! Keep in mind that after someone manage to do it, I will raise the score needed).Also, as Mango wrote on his post, I made a twitcam, and we chatted a lot over twitter ^^ Later you people can suggest more twicam subjects.Also I got some offers of places to distribute the game. YAY!So, that is it, follow the twitters (@agfgames and @criadordejogos) and play a bit more.