As I write this in one window of FireFox, I have the "To Do" list for the mod open on another screen and it is slowly but surely turning green. We keep all the done stuff on the list just for motivational reasons as you can see just how far we have gone. If we had an extra player animator/rigger and a sound engineer, we'd be much closer! *hint*

We hit a little blip mid March where productivity dipped a little but in the last two weeks lots of amazing things have happened. Last month I told you about some work mXed had done, but didn't go into specifics. What he had done was a bunch of stuff for the first major patch after release, but they were so awesome we have brought some of them early into 1.0. One by necessity and the other because we thought why not?!

The first is the Thompson M1928A1. It is a beast, lets get that clear, with a much higher rate of fire than the other two SMG's you really don't want to get caught in its path. We brought this into an earlier release because technically we were breaking the laws of history by using the Sten in a few maps, it wasn't invented/supplied till 1942 and we have some earlier maps than that. Porc, one of our testers, has compiled a short video showing the rampage it can cause:

The guns certainly aren't clones of each other in this mod but both SMG's in the maps have their pro's and con's which balance them out nicely. The Thompson will be available as a default Assault Class choice in all maps prior to 1942 and those defined as being in the Mediterranean conflict for a bit longer. For those that don't have the time for a video, here's a pair of shots showing the weapon in haj_mercury and haj_archery. 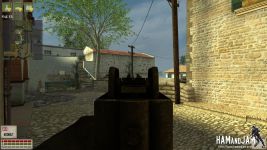 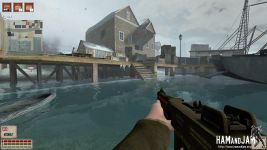 The eagle eyed viewers will notice something different about the objectives in Archery, for it is no longer an Attack/Defend map. SteveUK implemented our Destroy gamemode this week and we've been testing it out in a few maps to much amusement. This again was meant for 1.1 but seeing as it was essentially only relying on art assets we finished it off there and then. It's an assortment of various styles of gameplay from other games/mods but its one we feel works best. You spawn with no TNT and have to go to certain 'TNT dispensers', for lack of a better phrase, to get your TNT. Then instead of having a pre-defined place to attach the TNT to, you have a general area allowing sneaky placements. We ended up with testers sticking the TNT to the underside of tables, the axles of trucks etc all in an attempt to fox the defenders who have 30 seconds or so to defuse the TNT. Great fun and ensure a bit of change each round. We'll hopefully show that off next month.

Lastly a short round up of what else has been going on; Jed finally found the time to implement his new helmet system. Visually it's not much different to the old system but is infinitely more flexible and allows the potential for players to select their head gear in the future. At the very least we don't have to compile the player models every time we want to add a new helmet!

The maps are being given a new beauty pass along with final bug checks, Spine has been hard at work creating some lovely (non boring generic hl2) detail sprites for the grass in our maps. I think you'll agree it is a vast improvement: 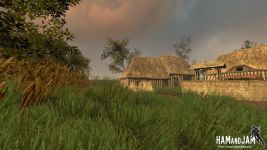 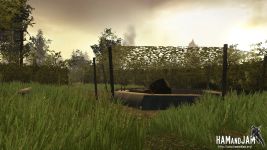 Two of our testers, MrGrubby and sli-woody, have been hard at work making their own maps for Ham and Jam and both stand a good chance of becoming official. If they'll let us we'll show some images of them soon but both have radically different settings and playstyles. If they were to make the first release we could be on for at least 7 maps on release day with at least 3 different gameplay modes.

More as always next month!

Loving the sounds of the Thompson, and the model of course :) nice job on it. And bravo with the maps, they look absolutely superb

That was just the placeholder sound, engineer (our sound guy) uploaded new sounds this weekend for the test and let me tell you...the Thompson sounds like a beast!

Very very nice, however one thing still bothers me, movement speed is still very fast and erratic, and....there has been something else bothering me, I couldn't quite figure out what it really was, the level design was ok, the colour scheme could probably look a bit more moody, but that wasn't the problem, the movement wasn't really related to this....so I couldn't understand what this bother was....until I realized that there was a happy little birdy chirping away in the background.
There should be no happy birdy, the happy birdy should be a very sad birdy because there are lots of loud cracking and banging noises all around him, and the environment is exploding and being destroyed around him....so happy birdy should have flown away sooner to get away from all the loud banging noises.
Point being: There should not be a cheerfully singing birdy :)

Wow. Do you really get bothered by that!? Anyway, nice update. Really looking forward to this. These latest graphical tweaks have really managed to improve things!

It just seemed too happy and cheery for a war atmosphere, that was why I pointed it out, whether some birds sing songs while bullets are blowing up their nests or not.

@Otreum I agree with the movement part, it's too fast.

Greatest ever!
I love the feeling in the weapons and the maps look super awesome.

This is how DoDS should have looked!

How is this any different from day of defeat?

Quite a lot, aside from the additional Commonwealth weapons and models;

1) Much more methodical gameplay, weapons are more lethal requiring teamwork to survive
2) Objectives are sensible and often require you to hold an area for a good 20s, rather than just running through an inanimate object to insta-cap
3) Working with team mates gives you all bonus features
4) A lot of the maps are based on real scenarios, featuring real layouts of places that actually existed as well as featuring the same objectives
5) It's a lot more tactical, multiple options to each objective and virtually any position can be outflanked.
6) Bullet damage fades over distance, no more being "headshotted" at 1km with a 9mm pistol round.
7) Much much more!

looks really twitchy to me

lol I want a 'maffia' thompson :P
like a special unlockable something :D

Been looking at your website for a couple of years now and I am really getting the feeling that things are being finalised.

Awesome progress and really looking forward to this

It's nice to see progress - I haven't looked at this mod in quite some time.

Not to be mean, but isn't this just essentially DoDS but with a new team and ironsights? Please prove me wrong.

@Saxonswine, i'm not talking about being as realistic as possible.
I'm not going to BS, because I really don't know if Robins are quite happy with deafening disruptive explosions and gunfire exploding around them like some kindof orchestral drums to their song, but hearing birds chirping away happily in the background in the middle of a warzone just doesn't contrast well in my opinion.
(Oops, comment was meant to be in reply to saxon's post)

Nice lookin' screenies! Like the video too, but it upsets me to think that the gameplay might be similar to Dod:S (hope I'm wrong!). Though at least the Thompson does something in this.

Having played the mod, I can assure you it is vastly different from DoDS.