The first development and progress update for Attack of the Gelatinous Blob. An RTS of slimy proportions.

Welcome to the first of many dev updates. In these I will discuss the development progress over the previous two weeks and talk about what is coming down the pipe. The two week development cycles are called "Sprints" and force us to complete a bunch of tasks, from the planning stage to being in-game, within a reasonable amount of time and have the game in a playable state afterwards. Not publicly playable yet, but once it reaches alpha and beta.

Being the start of holiday season, we might not have too much time to complete in-game tasks. However there will be some game balance, story development, and abstract level design. Also a hopefully completed "Ray" the ray gun, places of interest (POI) for the civilians to wander to and check out so they can look busy (also integrated into the editor).

This is Triangle Bob, he is a placeholder/stand-in for the real models. His audition was okay, but he lacked conviction. We just didn't believe he was scared enough when a blob attacked. 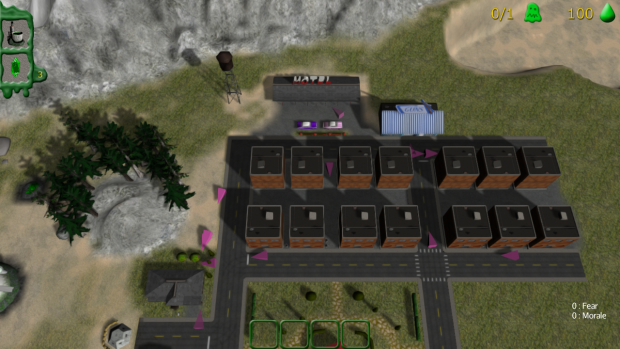 In this shot you can see him wandering to stores, browsing around, and heading off to buy a gun. He has about 20 identical twins.

An early 'Happy Holidays' to all.